Increased patrols along the Turkey-Syria border do not provide full security. 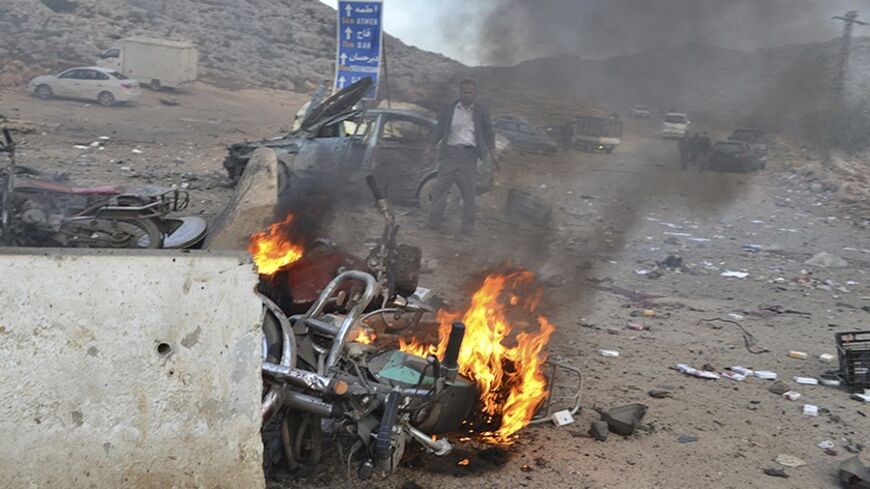 A man stands near a burning motorbike at the site of a car bomb attack at the Bab al-Hawa border crossing between Syria and Turkey, in Syria's Idlib province near the Turkish town of Reyhanli, Jan. 20, 2014. - REUTERS/Amer Alfaj

Expressing disbelief that the Geneva II talks could produce any definitive solution to the Syrian war, Turkish Prime Minister Recep Tayyip Erdogan continues to blame the permanent members of the UN Security Council for the ongoing bloodshed in Syria. “Although the UN is the largest organization aimed at keeping peace in our world, it has not yet taken a step [in Syria] toward peace. Of course, UN Security Council permanent members are primarily responsible for this outcome,” Erdogan said in Berlin Feb. 4.

“Unless the UN Security Council is reformed, the faith of such countries will depend ... on those permanent members. We will, however, continue doing our part without any break,” Erdogan said, adding, “There are nearly 700,000 Syrians in my country right now. About 220,000 live in tent and container camps. Others stay in houses in different cities. We have spent almost $2.5 billion on Syrians. The UN has only helped [with] $130 million. Whether the UN extends its helping hand or not, we will continue keeping our borders open for our Syrian neighbors.”

While Erdogan's frustration with the neverending death toll in Syria may be justified, the responsibility of this complex war zone should also be shared by countries like Saudi Arabia, Qatar and even Turkey, which has helped the flow of foreign fighters into the country, providing them with arms and training. The Erdogan government initially miscalculated the dynamics that make Syria a crucial asset for the conflicting interests of world powers like the United States and Russia, as well as Iran. Ankara got carried away, believing the Bashar al-Assad regime would follow in the footsteps of deposed Libyan leader Moammar Gadhafi or Egyptian President Hosni Mubarak.

Upon that strategic miscalculation, Turkey failed to make two key observations: that the terrain along the Syria-Turkey border is challenging and difficult to fully control, and that once a government adopts a loose border-control policy, radical jihadist groups will abuse such weakness without reservation. In fact, Turkish officials have told Al-Monitor that those radical Islamist groups possess advantages, as they are better fighters than the regime’s foot soldiers.

“It is not possible to be 100% sure that all those coming from or going to Syria through Turkey are all Syrians. Many come without any paperwork, and it is anybody’s guess to figure out who they really are. We even hear of Indonesians going into Syria through Turkey,” said Cihat Acikalin, a criminal lawyer in Reyhanli, a town on the Syria-Turkey border in Hatay province. “The government has increased the number of patrols at the border, but once the rules are broken, it is not really possible to completely mend them.”

Acikalin noted that Turkey has not yet acknowledged the Syrians as refugees, and therefore the UN’s support to Syrians in Turkey remains vigilant. Acikalin also talked about the rising problems of smuggling and human trafficking in the area. “Once the state relaxed its control of the border, it encouraged many to get into the smuggling business. This war has created its own entrepreneurs, and they don’t want the state now to retighten its control of the border. They resist it,” he said in a Feb. 5 telephone interview. “What is more troubling for us are the rising instances of trafficking in women. These are all changing the fabric of our own people. So, the issue for us is not only the existence of these radical and jihadist Islamic groups. They have now mostly moved toward the Kilis area, where they go and fight in Azaz, Syria. We are concerned that this is going to permanently change the fabric of our society.”

The Turkey-Syria border continues to be a big security challenge. On the Syrian side of the border, one of two groups is in charge: the Democratic Union Party (PYD) — the Syria branch of the Kurdistan Workers Party (PKK) — or a mixed bag of Islamic fighters. “The fighting groups against Assad continuously get fractured and regrouped,” Yasin Atlioglu, an assistant professor at Nigde University and an expert on Syrian affairs, told Al-Monitor. “Turkey has moved from supporting the Free Syrian Army to Jaysh al-Islam — better known as the Islamic Front, the new coalition formed in November. It is composed of a variety of Islamic groups fighting against the Islamic State of Iraq and al-Sham (ISIS). The front is considered more moderate, but [al-Qaeda’s Syria branch] Jabhat al-Nusra is also included in this Jaysh al-Islam, as well as the Tawhid al-Islam brigades and many others. The ground is too fluid, and it is really not possible to have a clear track on who is who, and what is really taking place. It certainly is a troublesome territory right now.”

Supporting Jaysh al-Islam is troubling for Turkey’s image, as it is a NATO member country and candidate for EU membership. Atlioglu stresses that, despite Turkey's actions, the country tries its best to not give off an image of supporting terrorist organizations. “It is important to notice that the Turkish military attacked an ISIS convoy inside Syria after Israel’s military intelligence chief [Maj. Gen. Aviv Kochavi] said there were three al-Qaeda bases in Turkey. Turkey certainly does not want to present such an image of itself.” In retaliation for cross-border fire on Jan. 28, the Turkish military destroyed three vehicles inside Syria, reportedly belonging to ISIS.

In this difficult terrain, Acikalin reminds us that people on the Turkish side of the border remain deeply concerned about the ongoing war at their doorstep, and they only wish not to get dragged into it.  “What really is worrying is that it has been only 11-12 days since AFAD [the Disaster and Emergency Management Presidency] parked a truck in front of the Reyhanli municipality to take the fingerprints of the Syrians living in our neighborhood. It’s better than never, but there have been so many instances where Syrians were involved in petty crime, and it is only now that the government has thought of collecting their identity records. No one knows who is who any longer, and that is a serious security challenge.”