Standing strong against corruption accusations, the AKP appears poised to rule Turkey for another decade as the Gulenists are likely to lose their political clout soon and the opposition remains weak. 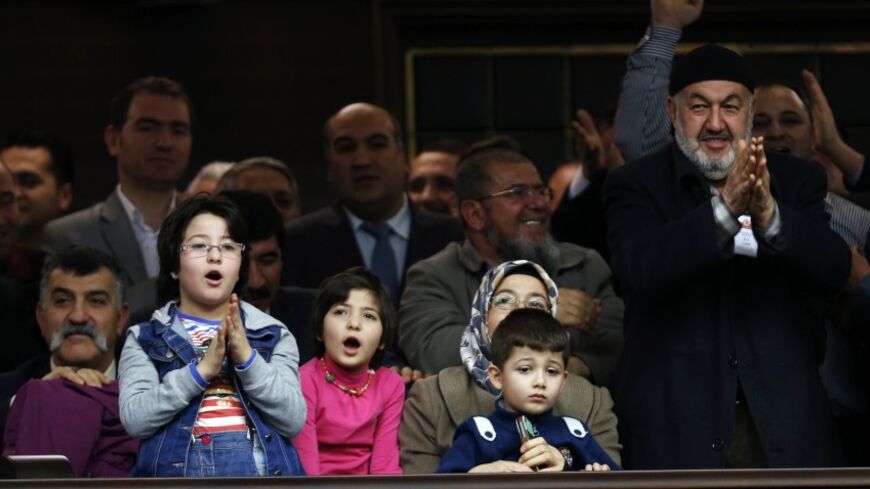 Supporters of Turkey's Prime Minister Recep Tayyip Erdogan react as he addresses the audience during a meeting at the Turkish parliament in Ankara, Jan. 28, 2014. - REUTERS/Umit Bektas

The climate in Turkey is again far from normal in the run-up to the March 30 local elections. Turkey was not and is still not a democratic state based on the rule of law. The Justice and Development Party (AKP), the country’s ruling political party, is locked in a political power struggle with Gulenists organized within the state. In old Turkey, political parties used to compete for power with the army’s Kemalist generals. The AKP’s rival at present is not the main opposition Republican People’s Party (CHP), but the Gulenist cadres within the state. Anyone closely familiar with Turkish society and politics is well-aware that neither the CHP nor any other party stands a chance of coming to power over the next decade.

Analysts have to be realistic, regardless of their political convictions. Objective analyses are needed on who will shape Turkish politics in the next decade. It is ridiculous for analysts opposed to Prime Minister Recep Tayyip Erdogan or the AKP to present their wishful thinking as valid assessments. Many irrational analyses during the Gezi Park protests had suggested the AKP was about to collapse. Hardheaded analysts, however, argued that the party would weather the protests by further consolidating its support base. They proved right.

On Dec. 17, the Gulenists launched an operation against the AKP, employing their might in the judiciary. The pretext for the operation is corruption. Some AKP ministers and officials could indeed be involved in corruption since the state continues to play a significant role in the Turkish economy and the economic system remains prone to fraud. The Gulenist objective, however, was to bring the AKP down, something that everybody within the state knows since the real political conflict in Turkey over the past two years has been between the AKP and the Gulenists.

Erdogan managed well the post-Dec. 17 propaganda process, and is already the winner of the perception war, as a fellow Al-Monitor contributor has argued. The Gulenists have largely failed to convince the religious majority of Turkish society. The AKP seems to have further strengthened its bonds with its support base. The grassroots of the CHP, the Nationalist Movement Party (MHP) and the Peace and Democracy Party (BDP), on the other hand, have always been averse to the Gulenists. All more reliable opinion polls indicate that the AKP will again be the winner in the March 30 elections.

The Gulenists are very well-organized and control key positions, but their support base in Turkish society is not that strong. To make up for that, they have sought to recruit external support, constantly befriending Israel and the United States. The AKP, in turn, is propagandizing that the Gulenists take orders from Israel. This has proven to be effective in further marginalizing the Gulenists since Israel is the country that most irritates the overwhelming majority of Turkish society. All Turkish politicians would target Israel at election time in hopes of boosting their vote. Notwithstanding, fresh efforts have been under way recently to normalize Turkish-Israeli ties, as Semih Idiz wrote for Al-Monitor last week.

The Gulenists will eventually share the fate of the military, which used to be a major player in Turkish politics until 2011 but wields no political clout at present. Nondemocratic means can no longer work in Turkey. Two years from now, in 2016, no one will regard the Gulenists as a political actor. They will sustain their presence only in the civic realm.

The reason why the vast majority of Turkish society fear the Gulenists today is their huge clout in the police and the judiciary. The leaked wiretaps that have recently rattled Turkey suggest that even the country’s two leading business empires, Koc and Sabanci, keep on very good terms with the Gulenists. The reason, according to me, is their fear of the Gulenist judiciary.

Relying on the state authority his followers control, Gulen is attempting to interfere also in politics. In his latest remarks, for instance, he gives instructions to step up campaigns against the closure of private tutoring halls and says that certain AKP parliament members should resign from their party. [The number of lawmakers who have quit the AKP since Dec. 17 rose to nine on Feb. 7 as another deputy, Ilhan Isbilen, announced his resignation.]

Gulen’s Islamic network remains highly influential in Turkish political and business life thanks to its clout in the police and the judiciary. But developments in the near future will lead to the outcome I predict, and the Gulen organization within the state will most probably be marginalized.