With perhaps an eye on a future run for prime minister, Israeli Foreign Minister Avigdor Liberman is establishing himself as a key player in US-Iran relations and in any eventual agreement with the Palestinians. 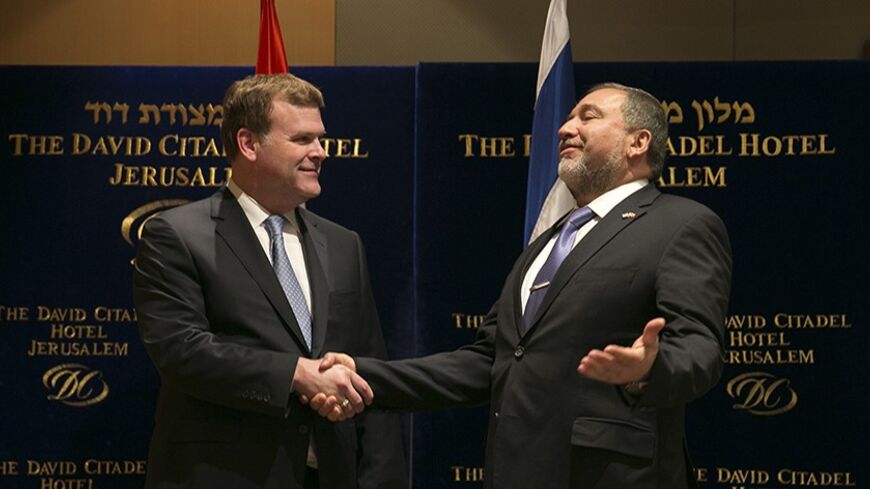 A European ambassador in Israel last week told a senior Israeli politician that his country is following with wonder the recent moderate declarations of Foreign Minister Avigdor Liberman. The ambassador wished to hear from the politician, who knows Liberman well, how to interpret the change that came over the foreign minister since he was acquitted of charges of fraud and breach of trust and returned to the government. This conversation took place prior to Liberman's speech before the members of the Commercial and Industrial Business Club on Feb. 7 in Tel Aviv, in which he defended US Secretary of State John Kerry from attacks by politicians of the Israeli right. The warm embrace he sent to Kerry, and the declaration, "When there's conflict between the unity of the people and the unity of the land, the unity of the people is more important," surprised the Americans and earned Liberman, at least temporarily, the designation of responsible adult. The barb he directed at Economy and Trade Minister Naftali Bennett that he "runs toward the microphones but not to the opposition," also contributed to this shock.

The US State Department quickly returned the favor with a gesture of its own, and in a special announcement said that the declaration of the Israeli foreign minister was "important and powerful, considering his history and his opinions on these issues."

On Feb. 12, Liberman will visit Paris and meet with French Foreign Minister Laurent Fabius. Since his return to the Foreign Ministry in November, Liberman has visited Washington, Geneva and London. The choice of destinations is no coincidence: Liberman returned to office with a plan to advance Israel's foreign relations to improve his image after an unsuccessful first term. If the old Liberman used to humiliate Palestinian President Mahmoud Abbas, the new Liberman speaks in favor of a two-state solution. The old Liberman tried to get close to Russia and President Vladimir Putin, and the new Liberman is the American dream.

In less than three months, the Israeli foreign minister went from an unwanted guest in the US capital and from someone received with suspicion in European capitals into an intriguing and promising Israeli leader. To the amazement of senior diplomats in the West, he is trying to reinvent himself as a moderate and trustworthy politician who functions as a supportive and rational partner to Prime Minister Benjamin Netanyahu in the Likud-Beitenu party.

One can understand this curiosity. While the moderate positions of Justice Minister Tzipi Livni are well-known, as is her limited ability to influence Netanyahu, Liberman is considered someone who can deliver the goods.

Is this merely a diplomatic and political move or a real change in Liberman's approach toward the Palestinians and the world? In the meantime, only one thing is certain: the foreign minister has extended his patronage to Kerry in Israel. He has appointed himself to defend the secretary of state from the curses and insults hurled at him by right-wing politicians from the Likud and HaBayit HaYehudi parties on an almost weekly basis. And when Liberman decides to stand at someone's side, he will do so to the end. It's simply a matter of style — but in international diplomacy there's great significance to tone and style.

Thus, while still not knowing what lies behind the change in the Israeli foreign minister, the Americans justly see great importance in his words. More than any other member of the Likud and the entire coalition, Liberman is key to significant advancement in the diplomatic process with the Palestinians. While Bennett and Defense Minister Moshe Ya'alon are to the right of Netanyahu, Liberman can help the prime minister win the support of the right. Without him, we can assume with near certainty that nothing will happen.

Bennett and senior members of HaBayit HaYehudi, as well as Deputy Transportation Minister Tzipi Hotovely and other hawks in the Likud, rushed to ascribe political-survivalist motivations to Liberman. The foreign minister, they claim, is zigzagging because of political distress. "Liberman is stressed because of his electoral disaster in the last elections. He lost 70% of the support of his base and he is afraid of Naftali Bennett," said senior members of HaBayit HaYehudi. But from its harsh response it seems that the real stress was actually felt this week in the far-right.

Liberman seeks to be prime minister, so he's trying to reach a new audience of voters after exhausting his electoral potential on the right, but Bennett doesn't bother him in this regard. The chairman of the Yisrael Beitinu Party is interested in drawing strength and supporters from the political center and the moderate right, following the political model of late Prime Minister Ariel Sharon in the Likud and Kadima parties. At this stage, it's already clear that there's almost zero chance to continue the alliance between the Likud and Yisrael Beitenu in its current model in the next elections. But Liberman has many other possibilities for cooperation with Netanyahu, including the creation of a joint centrist political framework, if they wish.

Liberman, on his end, has tried to mitigate the extent of the change ascribed to him. In an interview with the Israeli army’s radio station, the foreign minister said that he is "acting in a realist and pragmatist manner in every way, and there isn't anything new here." He asked to discuss "facts and not images and prejudices." In almost the same breath, he said that for the sake of an agreement with the Palestinians he would also be willing to evacuate his home in the Nokdim settlement.

Liberman has a political plan. It's still unclear if it will lead him to far-reaching actions, but the change in his behavior is so pronounced that it's easy to imagine the political left and center embracing him in the near future.

On the eve of the Gaza Disengagement Plan, Sharon fired two ministers from the HaIchud HaLeumi Party, Liberman and Benny Ayalon, to secure majority support for the plan in his government. Will it be Liberman this time who fires two ministers from the hard right in his faction — Tourism Minister Uzi Landau and Agriculture Minister Yair Shamir — to enable Netanyahu to authorize a diplomatic document that includes the vision of two states? After his recent speech, this scenario, which had been raised as a type of wild gamble in the political system, no longer sounds as unlikely.