In an interview with Al-Monitor, right-wing Knesset member David Rotem defended the governability bill designed to strengthen the government and its prime minister, even if it put him on a collision course with the Arab Knesset members fearing the rise of an electoral threshold. 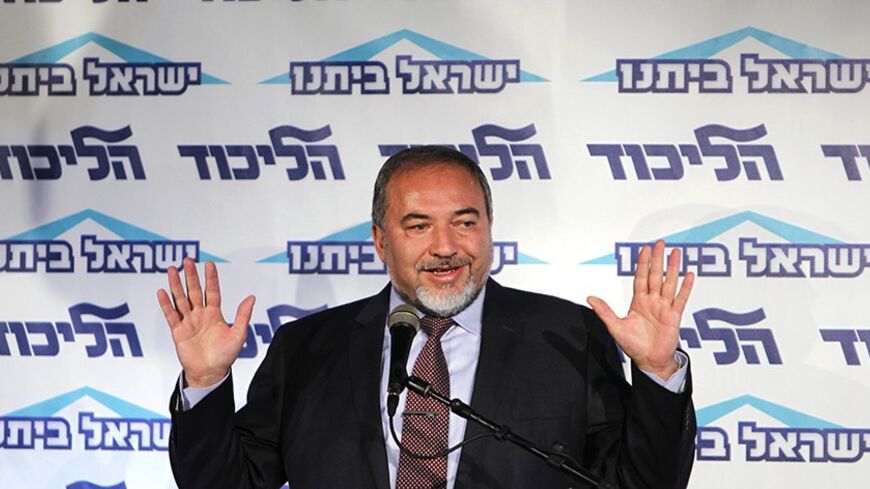 Israeli Foreign Minister Avigdor Liberman gestures as he speaks at a conference for young members of his Yisrael Beitenu Party in Tel Aviv, Dec. 13, 2012. - REUTERS/Amir Cohen

For years, relations have been tense between veteran chairman of the Knesset’s Constitution, Law and Justice Committee David Rotem of Yisrael Beitenu Party, and the Arab Knesset members. Periodically, this charged relationship becomes heated and the arguments become high-pitched. Rotem, resident of the Efrat settlement in the Judea area, believes that the Arab Knesset members are leading double lives: On the one hand, they are citizens of the State of Israel and members of its parliament, while on the other hand they are emissaries of the Palestinians and their positions.

Foreign Minister Avigdor Liberman, chairman of his party, has also often expressed this stance in recent years. For Liberman, Rotem is an important vehicle for realizing the party’s ideological agenda via one of the most important committees of the Knesset. This is Rotem’s second consecutive term of office as head of the committee.

The governability bill, designed to strengthen the government and its prime minister, is viewed by Rotem as the crowning glory and apex of his work in the committee. This same bill also puts him on a collision course with the Arab Knesset members. They claim that one of the bill’s clauses raising the Knesset’s electoral threshold from 2 to 3.25% of the votes, is intended solely to harm representation of the Arab public in the Knesset, and them personally.

The bill passed its first reading last July, and Rotem is preparing to complete the legislation in the coming weeks; this itself raises the tension level in the discussions. Alongside the ultra-Orthodox draft law, the governability bill is one of the flagship laws of the current coalition. Its objectives are to heighten the government’s ability to govern and limit parliamentary means of toppling the government, such as via no-confidence votes. The extent of its importance for the coalition structure and the far-reaching changes it encompasses, might be matched by a similarly harsh and dramatic confrontation.

Recently, a professional opinion composed by sociologist Sami Smooha was brought to the attention of the committee. Smooha argues that as opposed to what the Arab Knesset members hold, a rise in the electoral threshold will increase their power in the Knesset because they will be forced to unite in one party. Ever since Rotem received this professional opinion, he proudly brandishes it. “Here is the proof that we do not want to harm the Arabs and that such a charge is nonsense,” he said on Feb. 18 in an interview with Al-Monitor. “But I don’t raise false hopes that this opinion will put an end to their arguments. They will never be convinced that it will benefit them, since the law comes from Liberman’s party.”

Al-Monitor:  David Rotem, when we examine expressions voiced by Liberman and yourself about the Arab Knesset members, one can understand their suspicion. You de-legitimize them.

Rotem:  No matter what we say, we’ll never be OK in their eyes. All their arguments are nonsense. I have no intentions of apologizing for the fact that I try to realize my policies in the framework of my duty. In general, one of the most severe problems I have with the Arab Knesset members is the fact that they are more concerned about the Palestinians than about Israel. That really bothers me.

Al-Monitor:  Do you really believe that raising the electoral threshold will strengthen governability?

Al-Monitor:  Do you mean, fewer Arab parties and fewer problems?

Rotem:  That doesn’t mean that there won’t be Arabs in the Knesset. There will be one large Arab party. According to the new law, no-confidence votes may be submitted only once a month. That is certainly enough. After all, everyone knows what happens today: The opposition looks high and low for issues over which to submit a no-confidence motion, then no-confidence votes are taken on general subjects and much time is wasted. Instead, we should be discussing the important issues.

Al-Monitor:  No-confidence motions are an important tool for the opposition. Do you want to undercut the effectiveness of the opposition?

Rotem:  It [the new law] won’t harm the opposition, it will only restore order. The opposition will still be able to make no-confidence motions, but only once a month. The great change is that it will be a constructive no-confidence; in other words, they will have to present an alternate government and show who is willing to go with them.

Al-Monitor:  The governability bill limits the number of ministers. Who can guarantee that a new prime minister won’t change the law to enlarge his government, when faced with coalition constraints?

Al-Monitor:  Are you ready for a vote on the governability law? Have you already consolidated a majority?

Rotem:  We will reach agreements in order to pass the section about the electoral threshold, which is the hardest article since many oppose it. Smooha’s professional opinion now cancels the arguments of the Arabs, and that helps. We set the first meeting of the committee to be held at the beginning of March. We intend to complete the legislation before the summer recess, and it will happen.

Knesset Member Ahmed Tibi (of the Arab-Israeli Ra'am Ta'al Party) grimaces at the possibility that Rotem may be acting with a clear conscience and solely from pure intentions of improving Israeli democracy. “All in all, Rotem is following the orders of his master, Avigdor Liberman,” Tibi says, “Rotem is Liberman’s emissary in the committee, he’s not a professional chairman.”

Al-Monitor:  Sami Smooha’s opinion proves the opposite, that this law will benefit the Arab citizens.

Tibi:  I regret the fact that Smooha and others think that raising the electoral threshold will help the Arab sector. If the Arabs need to establish one list, it must be done without coercion.

It is clear to me that Rotem, as Liberman’s emissary, wants to harm the three Arab parties. Sometimes I attend the Knesset’s Constitution, Law and Justice Committee for the discussions on the governability bill, and it is hard to see what Rotem does there and how he oversees the meeting: He is stuck on the goal of harming us, and nothing [else] interests him.

As far as Rotem is concerned, Tibi’s words are enduring testimony that the Arab Knesset members are locked in their positions and unable to free themselves. Rotem is not bothered by the attacks launched against him, and one may even argue that these attacks cause him satisfaction. After all, Liberman, assisted by his advisor Arthur Finkelstein, built an entire election campaign on confronting Israeli Arabs, under the rubric, “Without loyalty there is no citizenship.” We can say for sure that Rotem is also a loyal soldier to this agenda.