The successful conclusion of a long-term nuclear agreement with Iran could open the way for the return of US diplomats, but Iran must guarantee their safety. 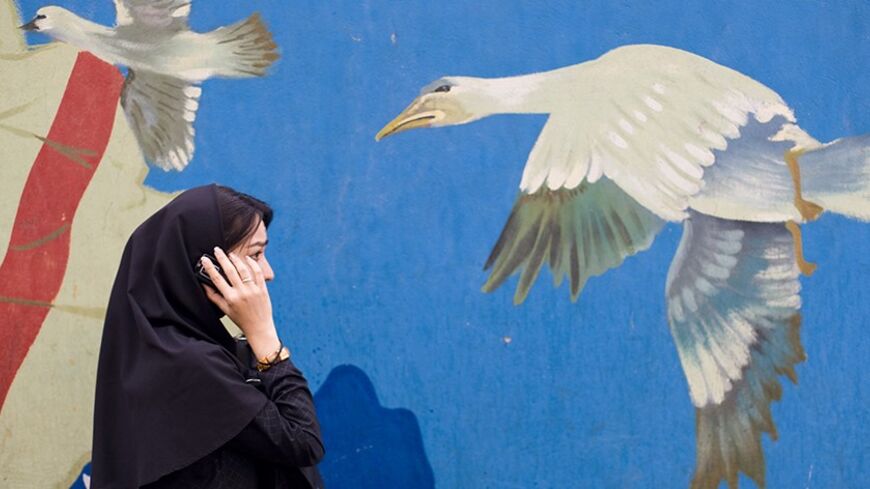 A woman passes a mural on a wall of the former US Embassy in Tehran, Nov. 5, 2008. - REUTERS/Morteza Nikoubazl

Since the 1979-1981 hostage crisis, there have been no US diplomats stationed in Iran, but the time may be approaching to send Americans back, given recent progress in the nuclear talks and a breakthrough in high-level US-Iran contacts. Officials in the Barack Obama administration say that their priority is finalizing a comprehensive nuclear accord, but broader diplomatic moves could follow.

Ramin Asgard, an Iranian-American who dealt with Iran indirectly for many years as a US Foreign Service officer, argues in a report to be released Feb. 19 that staffing a US interests section in Tehran with Americans — one step shy of full diplomatic relations — would serve US national security in a number of ways.

The diplomats would gain an understanding of Iran that has been lacking in official Washington for three decades — a situation, Asgard asserts, that has led to “disjointed, often contradictory and consistently suboptimal policy outcomes.” The Americans could also process visas for Iranians seeking to visit the United States — at present they must travel to neighboring countries to obtain them — and provide services to American citizens in Iran, including dual nationals. Switzerland currently represents US interests in Iran, but is limited in the services its diplomats can provide.

Iranian-Americans overwhelmingly support a return of US diplomats to Iran to staff an interests section. A 2011 survey by the Public Affairs Alliance of Iranian-Americans, the nonpartisan group that commissioned Asgard's report, found 73% in favor. Processing visas in Tehran could also boost the number of Iranians studying in the United States, an important element of cultural diplomacy.

Bernadette Meehan, spokesperson for the White House National Security Council, told Al-Monitor in an email that for now, “Our discussions with Iran through the [five permanent members of the UN Security Council plus Germany] P5+1 and bilaterally are focused on the nuclear issue, and our priority is to try and achieve a diplomatic solution that addresses the international community’s concerns.” If, however, she added, “we can resolve the issue of Iran’s nuclear program, that can serve as a major step down a long road towards a different relationship, one based on mutual interests and mutual respect.”

The George W. Bush administration on several occasions considered the idea of sending American diplomats back to Tehran to staff an interests section. In the fall of 2005, the idea was included in a State Department options paper leaked to the Wall Street Journal and promptly disavowed by the White House. Then-Secretary of State Condoleezza Rice resurrected the proposal during Bush’s second term, as the war in Iraq escalated, and Iran accelerated its nuclear program. In her memoir, No Higher Honor, Rice compares formulating policy on Iran without an official US presence there to operating “with one hand tied behind our back.” She also notes that the United States has staffed an interests section in Cuba for decades.

Rice said she raised the idea of sending American diplomats to Tehran in the fall of 2007, but dropped it when a series of US initiatives with Iran fizzled. She cites the resignation of Ali Larijani, the Iranian national security adviser who had been working on a nuclear deal with the United States but was thwarted by President Mahmoud Ahmadinejad, and the failure of Russian leader Vladimir Putin to mediate a solution with Supreme Leader Ayatollah Ali Khamenei. In addition, the Iranian Revolutionary Guard began menacing US Navy ships in the Persian Gulf in early 2008.

Stephen Hadley, White House national security adviser for Bush’s second term, told Al-Monitor in a recent interview that the administration had been concerned that a request to staff an interests section then would have sent “mixed messages” to Iran, which the United States was trying to sanction and isolate after its overtures failed and a 2007 National Intelligence Estimate appeared to minimize the Iranian nuclear threat. The Bush administration was also worried that it would be seen as “going squishy” on Iran at a time when “We were already under fire politically for being too soft on North Korea from a domestic politics standpoint,” said Hadley.

The State Department reconsidered the idea once more in the summer of 2008, after then-Undersecretary of State Bill Burns joined multilateral talks with Iran in Geneva, dropping the US precondition that Iran first suspend uranium enrichment. The initiative died again, however, when Russia went to war with Georgia that August.

Hadley told Al-Monitor it would not be a good idea to approach Iran now about an interests section, given that “We already have a problem of people running ahead of the progress in the negotiations,” including companies eager to resume business with Iran. He added, however, “If we get an outcome on the nuclear issue, and get a final deal, then that is certainly something we ought to consider.”

Nicholas Burns, who as undersecretary of state for political affairs in the Bush administration was responsible for Iran from 2005 to 2007, said in response to a question from Al-Monitor at a recent briefing on Capitol Hill, “The idea of establishing a consistent channel [to Iran through a US-staffed interests section] is a very good one.” He added that he would trust the Obama administration “to decide the right time” and that the real question would be whether Iran would agree.

Indeed, Hassan Rouhani laughed off the question at his first news conference as Iran’s president last August and ducked it again in September in New York, speaking instead about the importance of encouraging academic and other exchanges with the United States — something that could be facilitated by having American diplomats in Iran. Rouhani, however, was more upbeat last month when asked by a Swiss interviewer whether another embassy could reopen in Tehran.

A key concern would be the safety of the American diplomats, given the grim memories of the hostage crisis and that government-backed thugs have looted the British Embassy in Tehran as recently as 2011, to protest economic sanctions.

Asgard writes in his report that the Iranians would have to provide “ironclad guarantees” of the Americans’ security and reaffirm adherence to the Vienna Conventions on Diplomatic and Consular Relations, which forbid entrance to diplomatic facilities by nationals of the host country without the permission of the head of the diplomatic mission. He notes, however, that in the past decade in particular, American diplomats have been sent to far more dangerous places than Iran, including active war zones in Afghanistan, Iraq, Libya, Sudan and Yemen.

John Limbert, one of the 52 Americans held hostage for 444 days during the chaotic first years of the Iranian Revolution, agrees that Iran would need to pledge to safeguard the security of diplomatic personnel and property. He also told Al-Monitor that Tehran authorities should end commemorations of the Nov. 4, 1979, embassy takeover, limit the use of anti-American slogans and discuss compensating individual hostages and their families.

Limbert counsels patience. “I would not rush to send colleagues back to Tehran while US-Iranian contacts are at such a delicate stage,” he said. “The current positive signs we see are part of a very delicate process [that] could be undone by bad luck, bad timing or missteps by either side. Our people can become a focus of hostility, as we were earlier. I fear that at the first upset [and there will be upsets] we will see a rerun of the events of 1979.”