In an exclusive interview in Tehran, Palestinian official Jibril Rajoub discusses his effort to rebuild Fatah’s ties with Iran. 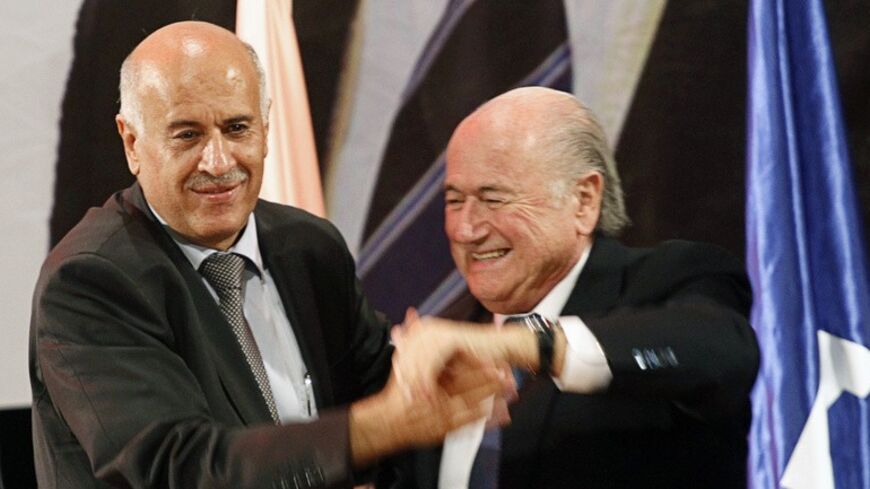 TEHRAN — Jibril Rajoub, Fatah's central committee deputy secretary, was in Tehran on Jan. 28. The visit surprised many, given the history of strained relations between Fatah and Iran, despite the fact they enjoyed excellent ties before, and in the first few months after, the Islamic Revolution.

Rajoub is known to be a strong defender of the peace process with Israel — a path that Iran and its affiliated groups in Palestine oppose and describe as hopeless.

I met Rajoub during his visit to Tehran and asked him about his new ties with the Iranian government, and whether this means change in Fatah's regional strategy. The tough former chief of the Palestinian Authority Preventive Security Force and current head of the Palestinian Olympic Committee was intimidated when I asked him if Fatah had decided to return to resistance. "Fatah is the resistance," he said, indicating that 2014 is a crucial year. "Either we get our state or Israel will have to pay the price."

Al-Monitor:  Today, you are in Tehran. What is behind this visit?

Rajoub:  There are regional and international changes, and I think the Iranian political administration made a step toward its neighbors, the international community and Palestine. I was dispatched to Tehran upon the request of Palestinian President Mahmoud Abbas to convey his regards to the Iranian leadership and congratulate the Iranian people on the agreement with the P5+1 that [saved] the region from a destructive war — a war that was backed by the extreme Israeli and US right wing.

We came to tell them that it’s time to start a new chapter with Palestine — all Palestine — and mainly with the Palestine Liberation Organization (PLO). Another goal of my visit was to update the Iranian leadership over the latest development in Palestine, mainly about Israel’s growing settlement building policy, the Judaization of Jerusalem and the negotiations process. [This is in addition to] the latest on the internal Palestinian unrest, especially that we are receiving some positive messages from our brothers in Hamas, which we hope to transform into a solid agreement that’s of interest to all of us.

Al-Monitor:  Before your visit, relations between Iran and the Islamic movements in Palestine were much stronger than the ones with Fatah. Is there any change today?

Rajoub:  The relations were a bit cold, and I believe this was wrong, though we have no reservations on their ties with the Islamic movements. But, still, it’s important that they open to all Palestinian factions. Here, I think that the latest developments in the region gave the Iranians a clear picture and made them rethink their alliances in Palestine. Again, we don’t call on Iran to halt its relations with the Islamic movements. For example, the Islamic Jihad in Palestine is a respectful group with a Palestinian agenda, and it is backed by Iran, and we wish our brothers in Hamas could be like the Islamic Jihad. We want Iran to deal with all the Palestinian groups, and to see all the Palestinians with the same eye. As for us in Fatah, we have a red line in our relations with the whole world, including Iran — we want a Palestinian state, and we believe that such a state can solve the conflict.

Al-Monitor:  There are differences between Fatah and Iran in approach — the Iranians believe in armed struggle, and they have serious reservations on negotiations with Israel?

Rajoub:  As for the resistance, I’m not here to pitch my cause. The resistance is a tool, and it’s Fatah’s strategic choice, but we don’t resist according to anyone’s criteria. Resistance needs a clear understanding of the circumstances. Today, we are in the midst of a negotiation process with the Israelis. We know it’s a controversial process, and I can say it’s not popular, but we made this choice to unveil the real intentions of the Israelis and uncover this fascist right wing that is ruling Israel. This wing, led by [Israeli Prime Minister] Benjamin Netanyahu, is behaving like gangsters, and I think the Europeans have arrived at this conclusion, even the Americans. After this, all the options are on the table, and I call on all our brothers to come and agree on a resistance strategy — a strategy that adheres to the state, to the international community, and a resistance that all our people can embrace and take part in, [one that] the whole region can back and support. Once again, I repeat, all options are on the table in case the talks fail.

Al-Monitor:  What do you mean by “all the options are on the table”? Will Fatah adopt the path of armed struggle once again and leave the peace process?

Rajoub:  We’re not going to make a suicidal decision. The resistance will be limited to the occupied areas and against the occupier, and this is our right, according to the international law. The year 2014 is a crucial year to us, either we get our state or Israel will have to pay the price.

Al-Monitor:  What about the relations today with Hamas? You told me earlier there are positive messages.

Rajoub:  We received positive signs, and we replied that we had several agreements before, in Doha and Cairo. These agreements have enough points to end the conflict: first, the formation of a new government; second, the new government’s program; and third, preparing for election. The new government will be formed by President Abbas, and its main task will be ending the siege in cooperation with the regional powers. The program will be based on what we agreed on with the Arab League and the international community.

We know that Hamas sends messages to Israel and the United States that they are ready to abide by what was agreed on before. Hamas has a problem with Egypt, Syria, with more than a million Palestinians who are hostages in Gaza and with Israel. They don’t want to continue as a resistance group, nor do they want to deal as a state. They failed to set a good example when in power. They have to review their agenda and decide on the national Palestinian agenda, not any foreign one.

Al-Monitor:  When you met the Iranian foreign minister, did you discuss the situation of Palestinian refugees in Syria?

Rajoub:  Yes, sure, we spoke about the issue, but it’s important to state that our links with the Syrian regime are open. … It’s important to say that we are against the destruction of Syria, what’s going on in Syria, and the region is a [facing] new Sykes-Picot agreement that aims to destroy the political and economic strengths of the region for the sake of the occupation and Israeli aggression.