In an interview with Al-Monitor, Knesset member Ilan Gilon says that most of the settlers were motivated by affordable housing, not ideology, and will agree to return to Israel if offered compensation. 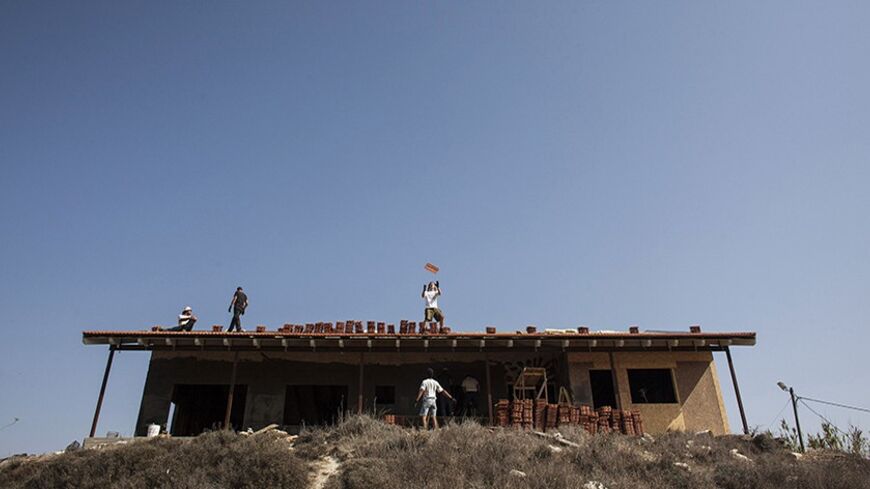 Men work on the roof of a house under construction in the unauthorized Jewish settler outpost of Havat Gilad, south of the West Bank city of Nablus, Nov. 5, 2013. - REUTERS/Nir Elias

The Meretz faction chairman, Knesset member Ilan Gilon, advanced a bill for compensating settlers who would voluntarily leave their homes in the West Bank, even though he knew in advance that the bill would fall in the Constitution, Law and Justice Committee. The bill was voted on this Sunday, Feb. 23, and faced opposition on the part of most government ministers, including Finance Minister Yair Lapid, chairman of Yesh Atid. Justice Minister Tzipi Livni abstained.

Gilon had anticipated exactly this scenario. A short time after the vote was taken, he hurried to argue that even those ministers ostensibly in favor of the two-state solution in fact voted for the continuation of construction in the settlements.

According to the Meretz faction bill submitted by its chairman, settlers who request evacuation would receive full monetary compensation for their homes. The state would assume full custody of the houses, without using them. Just like the process adopted during the 2005 disengagement from the Gaza Strip, an authority would be founded to carry out the evacuation. In this way, West Bank residents could move into the boundaries of the Green Line without having to wait for an agreement with the Palestinians. Gilon argues that numerous settlers are interested in such a law, which would save a lot of money in the event of a future mass evacuation.

Of course, this bill is nothing more than a parliamentary trick designed to embarrass Lapid and Livni. Nevertheless, it behooves us to take a close look at this bill, as it clearly reflects the atmosphere of confusion and bafflement in the political system in anticipation of the publication of US Secretary of State John Kerry's document. Gilon, a loyal soldier of the diplomatic left, is trying to fight for his views in the same ballpark used by Knesset member Miri Regev (Likud), who presented confrontational bills for the annexation of Jerusalem and the Jordan Valley. To his disappointment, Gilon discovered that his actions aroused far less interest than that of his Likud counterpart.

Gilon will continue the process in the Knesset on Feb. 26, when the bill will be taken to a vote in the plenum and rejected there as well. Throughout his years in the Knesset, Gilon has insisted on dealing only with socioeconomic issues, out of a radical socialist worldview that has often been labeled by him as Marxist. In his interview with Al-Monitor, Gilon stated that he feels the settlement enterprise is the main cause of the poverty cycle and economic tribulations within the Green Line.

Al-Monitor:  You were not exactly surprised at the opposition of the ministers to your bill. But in any event, what you wanted was to embarrass Lapid and Livni.

Gilon:  True. The bill was designed to expose them and the path chosen by the government. We saw that Livni and Lapid basically voted in favor of continued intransigence to peace and in favor of construction in the settlements. Even the fact that Livni abstained — that’s terrible in my eyes. After all, she’s leading the negotiations and waves the two-state solution banner in the government. I wanted to embarrass them, to place a mirror in front of them. What is it that I argue? I say: Let’s help those people who were enticed by the State of Israel to go to the settlements to raise their quality of life. A segment of the settlers are those who wanted to improve their housing standards, who wanted a house with a garden.

But as in the past, the State of Israel is still unwilling to take responsibility for its actions — in other words, to allow them to return to live within the Green Line under comfortable conditions. I see how the [Gaza] Gush Katif evacuees were treated, and I don’t want a repeat of this failure. These people should be evacuated on a silver platter to a new place with excellent conditions. Since the state already delineated part of the border with a fence, we more or less know where the border will pass. So why wait? These people are prisoners in their own country.

Al-Monitor:  Do you have hard numbers? Do you know how many people you are referring to? The right accuses you of provocation. They claim that there are maybe one or two individuals who want to accept such compensation, and what you really want is to destroy [the settlements] socially from inside to create the illusion that many people are prepared to leave.

Gilon:  I assume that we are talking about thousands. I think that in these places reside people who are tired of living for years with security problems and fear. They are worn out. These are people who didn’t go to these places for ideological reasons. They were young then, but now they are middle-aged adults who want to return to calm, peaceful lifestyles. I view them as belonging to the status of returning residents from abroad, and that it is the state’s obligation to help them — so as to prepare a soft landing for them in the future.

Al-Monitor:  Knesset member Gilon, are you aware that your bill is confrontational and evokes the style of the annexation bills advanced by Knesset member Miri Regev and other Knesset members from the far right?

Gilon:  I am willing to accept this comparison. But the issue is that to carry out the proposals of Miri Regev and Danny Danon, you’d have to blow up the Temple Mount. All in all, what is it that I am trying to say? That I want to return people back within the Green Line. To advance what will happen later. After all, it will happen. I argue that the state has a moral obligation to these people.

Al-Monitor:  Regev’s provocations are more widely covered. In this respect, her tactics were more successful.

Gilon:  It could be. I think that it just expresses burnout and boredom. Let’s admit the truth: We repeat ourselves time after time, and maybe people have gotten sick of it. I say it’s important to continue to put things on the table because either we’ll be here in another hundred years within the Green Line, or we won’t be here at all. I love the land of Israel more than the settlers do, because I am willing to settle for part of it. They are willing to take a chance and lose it all.

Al-Monitor:  Do you still believe that an agreement with the Palestinians is possible in a government headed by Netanyahu?

Gilon:  In my opinion, Bibi lives in dualism. He really wants to go down in history because he has a strong historical awareness, but he is afraid of those who are closest to him. Danon frightens him more than Kerry. I say this on the basis of keeping close tabs on Netanyahu, watching his behavior patterns and having several conversations with him. This man wants to go down in history, but something is stopping him.

Al-Monitor:  Does the left in the opposition have any influence at all?

Gilon:  First of all, I am encouraged by our strengthening. As far as I am concerned, this means that one day, everything we talk about will indeed happen. I only ask, why wait a hundred years and why pay prices that are so high? I always tease my good friend, Minister Uri Orbach [HaBayit HaYehudi]. I ask him, what would the right have done without the Six Day War? They would have remained without an agenda. Deep inside, I’m always fantasizing that the Six Day War had never happened.

My diplomatic viewpoint stems from the social justice concept that it is impossible to separate the occupation from the socioeconomic situation. It is as clear as daylight to me that nothing good will ever happen until the State of Israel abandons the settlements and starts investing in its children. Meanwhile, discrimination will continue between children within the Green Line and children outside of it. The state invests fourfold in the children there [in the settlements].

Al-Monitor:  But it is a fact that in one election campaign after another, you fail to convince the weaker societal elements of the justness of your paradigm. Doesn‘t this cause you to doubt yourself?

Gilon:  People like Miri Regev understand the logical contradiction involved, yet they continue to sell a falsehood. I believe that I am right. The most important resource for our economy and for our society is the peace process. Ultimately, this was also the problem of the social justice protest movement, that it did not make an association between the two. True, the protest created political change and that is encouraging, but we didn’t go in the right directions.

In my eyes, the new parties Hatnua, Kadima and Yesh Atid are like Ikea outlets, without any offense intended to Ikea. These parties are empty groups offering ad hoc solutions to nothing. So it could be that the recovery of the left stems from the understanding that Yair Lapid is only a performer.

In general, our finance minister lives in a dream world. He constantly mixes fantasy and reality. When he says that the equal burden law “brings Zionism back,” that means he has lost proportions a bit. There is not even an ounce of burden-sharing in this law. See what’s happening here — every generation has it harder than its predecessor. Each generation is weaker. My children have it harder than I did. At their age, I had an apartment. None of my children have [their own] roof over their heads. The absurdity is that more people die here from cancer and diabetes than from the Iranian nuclear program, and see how difficult it is to create a new list of priorities for the collapsing health system.