Hazem el-Biblawi's resignation highlights the difficult realities of governing and the uncertainties facing Egypt, and paves the way for Abdel Fattah al-Sisi’s candidacy. 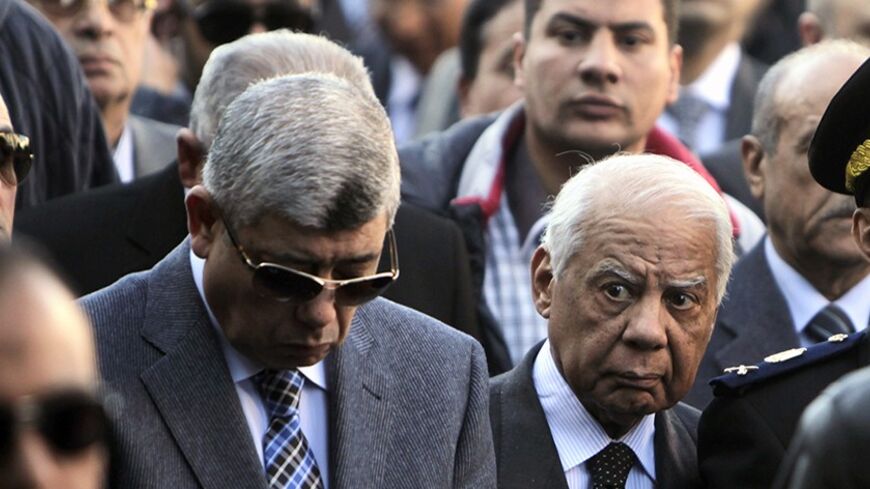 Hazem el-Biblawi’s sudden resignation as Egypt’s prime minister didn’t only take Egypt by surprise, but apparently even some of his ministers as well, according to some reports floating around. Minister of Higher Education Hossam Eissa, for example, told Foreign Policy that he “knew about it when [Biblawi] started speaking.” In another interview, he swore he had no idea why the resignation took place.

In his brief resignation statement, Biblawi provided no rationale for the move. Instead, he spoke of how he saw that, despite the setbacks and problems plaguing the country, his government had succeeded in steering the country overall across a difficult post-Morsi phase, restored basic security and helped bring forth a new constitution. He called on people to rally around the state, focus on national interests, then ended with it with a John F. Kennedy-style, “Before anyone asks, ‘What did Egypt do for me?’ — I would say: 'What did what did I do for Egypt?'”

Then, this afternoon, the speculation was confirmed when the housing minister, former head of the Arab Contractors Co., and former National Democratic Party (NDP) member Ibrahim Mehleb was formally tapped as successor. While seen as a capable man, detractors made allegations of corruption, while others pointed out his NDP background, being a member of the notorious Gamal Mubarak-led Policies Committee, and that he was an appointed member of the 2010 Shura Council, arguing his appointment was a bad signal of Egypt moving backwards.

While everyone was indeed taken aback by Biblawi’s resignation, few seemed sad to see the 77-year-old liberal economist, professor and banker resign his premiership. Taking the helm after the very unpopular Morsi-appointed Qandil government, many had high hopes for Biblawi. Instead, Biblawi and his government had grown unpopular by the end of his time in office, and have come to be colloquially nicknamed “El-Balawi,” a variation of his name that roughly means “The Catastrophes.” And while this unpopularity was a unifying sentiment for many, the reasons were anything but unified.

For the most ardent supporters of the current political order, Biblawi and his government were seen as “the shaky-hands government,” one that was reluctant to use the allegedly necessary greater force needed to crush the Muslim Brotherhood’s and their supporters' acts of violence, vandalism and “terrorism.”

For supporters of the Brotherhood and Morsi, Biblawi was seen as the man who helmed a government that oversaw the most brutal crackdown in Egypt’s history. For many of the pro-January 2011 revolution crowd, especially the youth, Biblawi’s government was seen as either green-lighting or quietly acquiescing to a slide into a police state and the restoration of an evolved version of the Mubarak era. As for much of the non-politicized masses and much of the media, it was a failing government as Egypt continued to struggle with energy blackouts, growing debt, security issues, worsening traffic, strikes and more. And yet, everyone seemed united on one other perception: Very few saw Biblawi as having an upper hand over the military (and on some issues, the Ministry of Interior) on any critical national decisions.

This was not Biblawi’s first governmental resignation. While serving as finance minister in 2011 during the Essam Sharaf Cabinet, he tried to resign following the October Maspero events, only for the military leadership at the time succeeding in persuading him to stay course. When taking the position of prime minister following Morsi’s ouster, Biblawi knew he wasn't the first choice. (The first options of Mohamed ElBaradei and Ziad Bahaa Eddin were shot down by the Salafist Nour Party.)

Why the current resignation, and why now? Well, no one is certain. Two broad suggestions were put forth. The first was that it was a coordinated and mutually agreed-upon resignation to provide a chance for a wide reshuffle, public appeasement as well as — most importantly in this narrative — a timed exit for Defense Minister Abdel Fattah al-Sisi, so he could make his much-awaited run for the presidency of Egypt. But the problem with this viewpoint is that, had it been true, then the resignation would likely have seemed more pre-arranged and ceremonial, everyone involved would seem more informed and the succession would have appeared even more resolute in its management.

The other viewpoint, which appeared more likely, was that the resignation was an on-the-spot decision, that “something unclear happened” during the weekly Cabinet meeting (which Sisi is said to have attended as he normally would as defense minister) that eventually made up Biblawi’s mind. No one has a decisive idea what this alleged “something” could be, but much speculation has focused on the government’s perceived inability to deal in particular with a growing wave of strikes as a tipping point. Hossam Eissa had also reportedly said that “[Biblawi] was fed up a long time ago,” and that “he was under terrible pressure from his family to leave his post. They couldn’t take insults from the public.”

Obviously, certain questions come forth. Will this be when Sisi finally makes his run for office? Well, it’s about time right now, if ever. Would the highly controversial Interior Minister Mohammed Ibrahim go as part of the wide reshuffle? Highly unlikely, given the critical role he’s played throughout the last months. (Several media outlets citing sources said that Ibrahim is indeed staying on.) Would this be nothing more than a bare-bones Cabinet to lead until the president takes over and forms a government? More likely not so, as this Cabinet — if well-performing — would at least potentially be expected to continue until parliament convenes.

Also interesting was a statement by a representative of the Salafist Nour Party, who said that the party is open to taking part in the upcoming Cabinet, a reversal of previous position with regards to the outgoing Cabinet in which the Nour Party was largely seen as instrumental in bringing Biblawi into power. This might well signify the party’s desire to further solidify its safety in a hostile anti-Islamist environment by getting another official stamp of approval through being a part of the government. Conversely, this resignation will also further damage the image of the Social Democratic Party, of which Biblawi (and Bahaa Eddin, his recently resigned deputy) was a founding member. Even though Biblawi economically is a liberal and party spokesmen continuously said that this was not officially an SDP Cabinet and that were they not influencing Biblawi’s policies, the party still remained associated with the Cabinet.

This was also the first Cabinet to contain a substantial presence from the secular-leaning post-revolution parties, those hoping to clearly define themselves as both pro-revolution and anti-Mubarak as well as non-Islamist. The extent of how the unpopular performance of the Cabinet might affect such parties’ electoral chances and public perception has yet to be seen. Biblawi himself, of course, ends his political career on a profoundly low note.

In his first statements, Mehleb stated the expected: He will focus on security, defeating terrorism, investments, the strikes and worker demands. The Cabinet is also expected to be fully formed in only a few days. But perhaps the most important thing to look for, other than Sisi’s anticipated potential exit and nomination, will be this: The composition of the Cabinet will say a lot about where the political power centers in Egypt see the country, how it sees its Mubarak past, the January revolution and the future it wants the country to go toward.