Amnesty International's damning report on violence perpetrated by Israeli soldiers in the West Bank brings back focus on the brutality of the occupation. 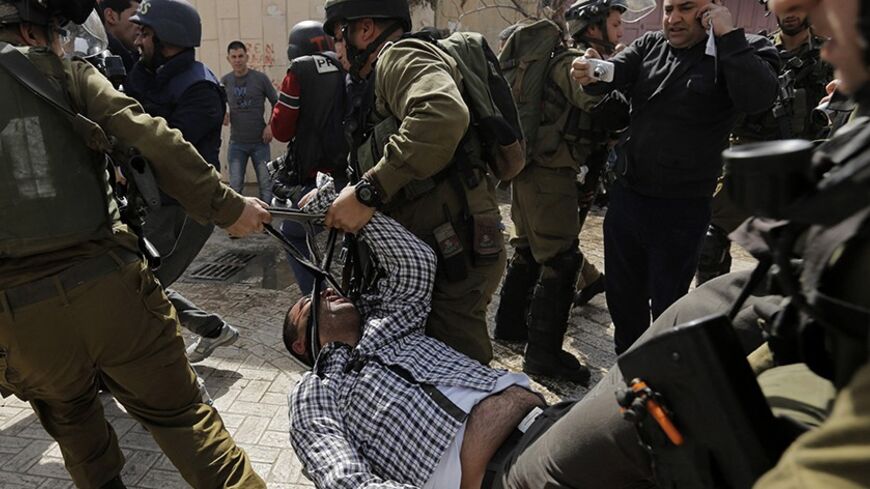 Israeli soldiers carry a Palestinian protester as they detain him during clashes at a demonstration against the closure of Shuhada street to Palestinians, in the West Bank city of Hebron, Feb. 21, 2014. - REUTERS/Ammar Awad

In a powerful and comprehensive report, the global human rights organization Amnesty International has sharply criticized Israeli soldiers for their reckless use of force in putting down nonthreatening Palestinian demonstrations. The report calls on Israel to stop using lethal force against Palestinian demonstrators and rescind military orders that reject Palestinian rights to freedom of expression and assembly. It also called on the Palestinian Authority and the PLO to “sign and ratify, without reservations, international human rights treaties including the Rome Statute of the International Criminal Court.”

Publishing a damning report on Israel at a time when the world is busy with Syria and Ukraine will no doubt help shift attention back to the Palestinian-Israeli conflict. It also adds a powerful element to the political discussion, namely the need for Western powers to stop selling weapons to Israel because of its flagrant violation of human rights and its war crimes that have been taking place undetected. The fact that a major international organization like Amnesty International is supporting the weapons boycott of Israel is a major political breakthrough.

The 87-page research report, citing UN figures, titled "Trigger-Happy, Israel's Use of Excessive Force in the West Bank," reveals the Israeli military’s disregard for Palestinian human life. It includes field investigations of 22 Palestinian civilians in the West Bank killed by Israeli soldiers in 2013. A further 261 Palestinians, among them 67 children, were injured by live ammunition in the period 2011-13. The number of killings and injuries in 2013 were a sharp increase of previous years. Most of the cases documented involved young people below the age of 25, and included four children.

Amnesty’s report opens with the heart-wrenching story of Samir Awad, a 16-year-old Palestinian student from the village of Bodrus, northwest of Ramallah. Awad and other students took part in an impromptu protest against the wall built on the town’s land, when they were ambushed by Israeli soldiers. Awad was shot three times, according to the report. He was initially hit in the leg, then in the shoulder and finally in the back of the head — a shot that proved to be fatal. The report details how Awad ran away after the initial shots, clearly proving the lives of Israeli soldiers were never in danger and constituting his killing as “extrajudicial.”

The Amnesty report documents with pictures and field interviews a number of other cases and reaches the conclusion that Israeli soldiers act with impunity when it comes to forcefully putting down Palestinian protests that have not included any firearms and have not endangered the lives of the occupying soldiers. Amnesty said that this abuse is the result of the Israeli soldiers' “use of unnecessary, arbitrary and brutal force against Palestinians.” Not only were the lives of Israeli soldiers never in danger, but in some cases, Amnesty stated, “there is evidence that they [the Palestinians] were victims of willful killings, which would amount to war crimes.”

While the report’s power lies in the details and thorough documentation of how the lives of Palestinians were cut short by a trigger-happy occupying force, its most powerful section lies in the recommendations that they say is necessary to break this “long-standing” Israeli pattern. The list of recommendations to Israel, if it wishes to reverse the current pattern of recklessness with Palestinian lives, is long and far-reaching. Amnesty, however, makes a powerful statement in what Israel’s major allies — the United States and the European Union — must do to send a message to Israel regarding its impunity, calling on them to stop sending ammunition and weapons to Israel.

The report comes at a time of faltering negotiations and in the midst of the Israeli Apartheid Week at many US university campuses. This report will intensify calls for boycotts, divestments and sanctions against Israel. It will be difficult for Israeli apologists to continue defending the continuation of the occupation when a respected global organization releases a report portraying Israeli soldiers as war criminals.