Writer Youssef Zeidan, with other Egyptian intellectuals, criticizes the institutionalized demonization of Jews and of Israel, calling to mend the relations between the two peoples, since this fracture affects Egypt first and foremost. 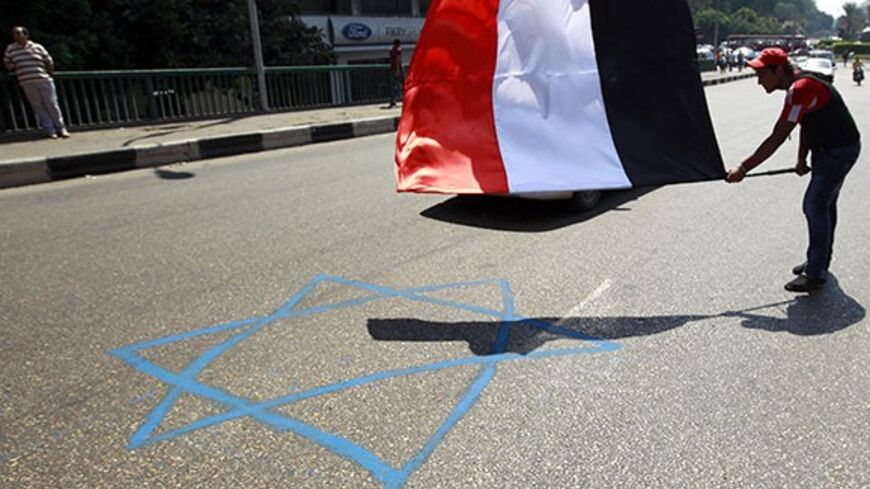 It’s not every day that a well-known Egyptian intellectual makes pronouncements of the kind made by philosopher Youssef Zeidan. The Egyptian and Israeli media missed what he said at the end of a Dec. 30 interview with journalist Lamis El-Hadidy on Egypt’s CBC TV channel, even though it went to the heart of the ties between Cairo and Jerusalem and between Arabs and the Jewish world.

Zeidan is a researcher of ancient manuscripts. He is also a greatly admired writer, the author of several excellent novels, most prominently “Azazeel,” which has been translated into 16 languages and was recently even published in Hebrew. Toward the end of the interview, Hadidy asked him how he sees the year 2014. Her guest’s answer was surprising: He suggested that Egyptians reassess their ties with the Jews.

“We should reconsider our notions regarding the Jewish question. We are not even aware how much this affects us. [It] has become a common trade, benefiting all our politicians. Any politician who wants to gain popularity curses Israel, but when he comes to power, he has no problem with Israel.

“That's stupidity. Stupidity that is connected to the ignorance of the people. We should reconsider this. Nobody looks out for our interests. We should be aware of this.”

This fresh thinking, in his view, should start at the very beginning, meaning from the dispute over the Isra'iliyyat. These are chapters included in the sayings by the Prophet Muhammad, known as hadiths, which originated with Jews who converted to Islam, offering interpretations of stories from the Quran in the spirit of the Torah. As a result, some are considered by Islam to be unreliable. For centuries, to this day, Muslim commentators have been seeking to uproot the Isra'iliyyat from hadith literature. There are even those who suspect that they were inserted into the hadiths to corrupt them. Zeidan’s words appear to question whether it isn’t time to minimize the importance of this debate, which overshadows the relationship between the two religions.

Zeidan didn't stop there. He also called for rethinking “the so-called Middle East problem, which I do not consider to be a problem at all” — in other words, the dispute between Israel and its Arab neighbors. “The Nasserists have been oppressing the people for 60 years under the pretext of the Middle East problem,” he said. As a result, “wars were fought and people were killed.”

He then suggested that his listeners change their perception of the Holocaust. He even provided an example from the Egyptian school system: the Balfour Declaration — the 1917 British promise which looked favorably on the establishment of a national home for the Jewish people in the Land of Israel.

“About Balfour,” Zeidan recalls, “We were indoctrinated at school: ‘What do you think about the Balfour Declaration?’ According to the system of ready-made answers, we were expected to respond: ‘He gave what he did not own to those who did not deserve it.’ That's it.”

The Egyptian philosopher’s statements are a call for a reform in thinking. They express the views of a small group among Egyptian thinkers, which sees the disgust that has developed between the Arabs and Israel as a problem that takes a toll mostly on the Arabs. Zeidan thinks that hatred of the Jews is sweeping and comprehensive: it is rooted in history, religion and contemporary politics. He is not acting out of a love for Israel. Zeidan is a patriot who believes that resolving the fracture between Egyptians and Jews could serve his countrymen, first and foremost. His courageous pronouncements undermine the deeply rooted Egyptian perception, encouraged from on high, of Jews as a threatening, demonic entity, and of Israel as a danger.

Two and a half months before the interview, in October 2013, the Egyptian daily Al-Masri al-Youm published an article by pundit Gamel Abu Al-Hassan. Abu Al-Hassan, a regular contributor to this newspaper, attacked the armed resistance policy adopted by the Arabs toward Israel. He directed his arrows toward the holiest of holies — the military elites in the Arab states. Abu Al-Hassan stated that they built their power on the foundations of the conflict. In addition, he claimed that armed organizations were nurtured by regimes in the Middle East as “pressure cards,” in his words, in the service of their regional interests. This tactic, in his view, confused Arab public opinion “and provided political ammunition for bankrupt factions.” The collapse of the myth known as “resistance,” in his words, will help political growth in the countries of the region.

The Egyptian comedian Bassem Youssef, the creator and host of the television satire “The Program,” which crucified deposed Egyptian President Mohammed Morsi and has since been banned, was recently interviewed by Jeremy Paxman on BBC. Paxman asked him whether there was room for satire in the days of former President Hosni Mubarak. “In those days, that door wasn’t even there,” he answered.

Well, not just satire. It’s doubtful that any pioneering criticism of the type mentioned here could have been heard in the days of Mubarak and his energetic minister of culture, Farouk Hosni. Zeidan would have probably thought long and hard before calling on the Egyptian people to reassess their negative attitude toward Israel, since he might have been suspected of cooperating with it and harming the national interest. And had he been confused for a moment and forgotten the boundaries of good taste, legions of co-opted journalists would have doubtless reminded him.

The daring statements by Zeidan and Abu Al-Hassan are still drowned out by the cacophony of slogans and stereotypes that prevail in the public discourse. It will take time until their vision is realized. But, if three years only after the outbreak of the January 25 Revolution, one can already say publicly that hatred of Israel is stupidity and armed resistance against it is self-defeating — something in this revolution is going well, despite the difficulties.