Top US economic expert says, "Turkey is not an emerging market." 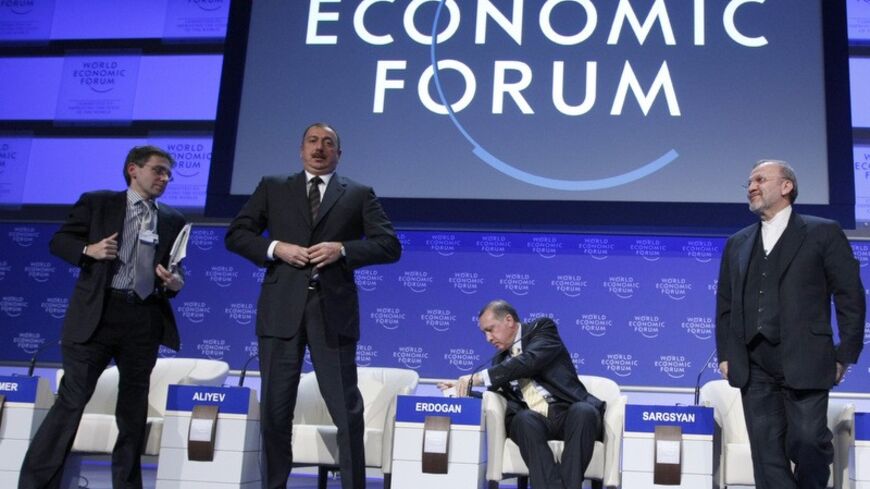 I don’t think Turkish Prime Minister Recep Tayyip Erdogan knows Ian Bremmer. He may therefore not have heard the former US Treasury Secretary and Harvard University professor Lawrence Summers when he stated, "The global economy has no sharper or more prescient analyst than Ian Bremmer.’’

But Erdogan may have heard of Eurasia Group, which Bremmer founded and leads. On the other hand, Ali Babacan, who participated at the Davos meetings and who is best described as “if not Turkey’s economic czar, the deputy prime minister in charge of economic affairs,” knows both Bremmer and Eurasia Group.

The quickest way to define the Eurasia Group would be to note its reputation as the world’s largest and most prestigious political risk consultancy. Every January, Eurasia Group releases a list of the “Top 10 Risks” for the coming year. Bremmer, speaking on a Wall Street Journal video feed from Davos on Jan. 22, made assessments about Turkey even scarier than being on the “Top 10 Risks” list. He agreed with the Wall Street Journal anchor's prediction that Turkey will be "a big story this year” as one of the “hot spots in the Middle East.” He added, "It wouldn't just be this year; it's probably next [year] as well."

What he said next should be considered drastic for Turkey:

“Turkey is not an emerging market right now, in the sense that it is not developing. They've had decades of actually putting their political institutions together, making them more consolidated. They're now stripping them apart. They're taking legitimacy out of the judiciary, out of the police forces, and it’s making it much more uncertain an environment for investors to want to be in.”

It should indeed be shocking for a country such as Turkey — which was being called one of “pivotal states” of the world and which, with the contribution of Richard Holbrooke, had assumed the mantle of an "emerging regional power" far beyond an "emerging market” — to be defined as “not an emerging market right now.”

The fact that this determination was made by the head of the world’s largest political risk consultancy, and that there are many in the international arena who would heed him, makes it particularly important. Worse, Bremmer offers a treatment related to this diagnosis and says of Turkey: “They've got a leader who needs to be out.”

It is probable that Erdogan, the "leader who needs to be out," would pour out his entire venomous wrath onto Bremmer if he knew him. Muharrem Yilmaz, president of TUSIAD, an association of industrialists and businessmen that serves as an effective lobbying group in Turkey, is not as lucky as Bremmer.

Although effective, TUSIAD is well-known in Turkey for its timidity and oversensitivity when it comes to political issues. However, the menace brought on by looming political instability obliged Yilmaz to touch upon certain issues during his association’s annual congress. Yilmaz noted that there are growing concerns about the “supremacy of law” and "independence of the judiciary” in Turkey and said because of that, “foreigners will not come to Turkey.”

The words of the TUSIAD chairman, which did not go beyond recalling a basic economic principle concerning the direct linkage between political stability and foreign direct investments in a country, were actually a softer version of what Bremmer had said a day earlier in Davos.

But Yilmaz isn't Bremmer. Erdogan knows him quite well. Moreover, he does not have immunity like Bremmer, because Yilmaz is a Turkish national.

Erdogan then went on to threaten Yilmaz and senior officials: "With what face will you invite this government's ministers to come to TUSIAD? How will you now come to do business with us?"

This threat was immediately interpreted to mean that the state will put up barricades to solving the problems of the private sector. TUSIAD represents companies that control almost two-thirds of Turkey's entire industrial production and import-export business. It is also known that in a country like Turkey governments have a major say in economic activities.

It is rare for a prime minister to threaten the chairman of an association of industrialists and businessmen with such language. While many political observers saw this language and style of discourse as proof that Turkey is governed, in Bremmer’s words, by a leader “who needs to be out,” still others read it as a reflection of Erdogan's desperate mindset. Markets interpreted it as confirmation of the increasing political instability of Turkey.

Nevertheless, Yilmaz was not deterred. Appearing on TV after Erdogan accused him of treason, he rejected the charges, saying it was his duty to make such warnings. He said, "Foreign companies in Turkey are our members. These companies produce more than half of the Turkish economy. I am trying to persuade them that Turkey’s investment atmosphere is attractive.”

This time, when the US dollar reached the psychological threshold of 2.30 Turkish lira, the Central Bank intervened by selling about $3.5 billion, but by the evening of Jan. 23 the dollar parity went over 2.30 Turkish lira. In inter-bank markets the rate climbed to 2.345 Turkish lira on Jan. 24, while on the free market operating at Istanbul’s famous Grand Bazaar it went up to 2.35 Turkish lira.

Erdogan seems not only to have undone Turkey’s economic miracle but also, as long as his bullying attitude and erratic governance continues, Turkey’s exchange reserves may be depleted, which may lead to further deterioration of the economy that in turn will add up to increasing political instability.

It wasn't long ago when we said Erdogan had transformed himself from an asset into a liability for Turkey.

Last week, he did his best not to disprove our observation about him.

And, at this point, I hope Erdogan will not call me “a traitor to the nation” because of the title and content of this Al-Monitor piece.