The political and economic forecast for Turkey in 2014 is uncertain and bleak. 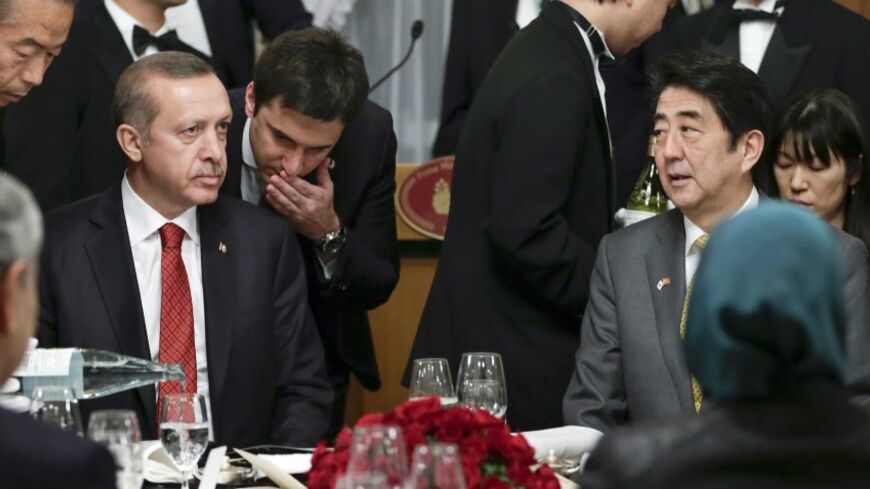 Over the past month Turkey has been living through mind-boggling developments without letup, so much so that some strategic declarations and events that would normally have caused ripples in the country have been overlooked. For Prime Minister Recep Tayyip Erdogan to declare in Japan last week that Turkey does not “have ambitions of becoming a regional and global power” was one of those momentous declarations that went unnoticed.

Erdogan traveled to Japan, Malaysia and Singapore as the “state crisis” in Turkey was peaking. In the question-and-answer portion of a panel, Erdogan said, “Turkey doesn’t have the goal of becoming a global and regional power. By just doing what it has to do, Turkey is given the place it deserves in the region and in the international community. That is the way it should be. Anything beyond that would be greed and over-ambition, which is always dangerous. We have no such greed.”

Erdogan’s remarks were nothing but repudiation of  his government’s foreign policy. One may even think of them as "self-criticism” of Erdogan who has the reputation as an ambitious, even “over-ambitious” politician.

Serkan Demirtas of Hurriyet Daily News, in an article written immediately after Erdogan’s above remarks, recalled what Erdogan inscribed in the visitors’ book during his visit to Ataturk’s Mausoleum on Aug. 1, 2013: “While Turkey is moving forward resolutely to become a regional and global power, it continues to contribute to stability, peace and serenity.”

It is impossible to explain the unbridgeable gap between what he wrote in Ankara in the second half of 2013 and what he said in Tokyo as we entered 2014 with "self-criticism.” It is well-known that Erdogan has no trait of self-criticism. To the contrary, he is constantly criticized for being arrogant and high-handed. That incredible reversal cannot be self-criticism.

A Financial Times editorial on Jan. 9 under the headline “Arrogance undoes the Turkish model” best explains the point Turkey has reached:

“Relations with the US have been damaged by the Turkish government’s insinuations that America is orchestrating the current corruption probe.

"The price Turkey is paying for his authoritarian style is immense. Mr. Erdogan is demonstrating to the world that Turkey is a country with a shaky democracy, a flawed constitution and a diminishing number of allies. Whatever 2014 brings, it will be a long time before Turkey regains its reputation as a forward-looking, moderate Islamic state that others in the region would do well to follow.”

The course that Erdogan set for Turkey, perhaps, was more strikingly described earlier by The Economist:

“When the Arab Spring burst onto the Middle East three years ago, hopeful democrats in search of a model were drawn to Turkey as a country that seemed to combine moderate Islam with prosperity and democracy. Unfortunately, the Arabs did not follow the Turkish path. Instead, Turkey has set off down the old Arab road to corruption and autocracy.’’

Consequently, all paths have led to further deterioration of Turkey’s economic performance. Anyway, Erdogan wasn’t in Japan to seek political support to extricate Turkey from its increasing isolation — which Japan couldn’t provide anyway — but to search for economic and technological backing for his megaprojects for the future.

The Financial Times said of the Turkish economy as Erdogan was visiting Japan: “There is a lot at stake. 'Turkey’s ambition to play a bigger role regionally and globally is premised on a strong economy,' said a senior international diplomat. 'That’s why it would be so important if the economy turned out to be a house of cards.'”

In the last days of 2013, Business Week published a forecast of how Turkey’s economic future is likely to be affected by politics:

“While Erdogan looks set to survive the crisis, Turkey’s reputation as a stable, well-managed economy may not. Even before the corruption scandal began, the lira had been weakening as a result of the country’s increasing current-account deficit. Now that deficit is growing even larger as risk-averse foreign investors sell off Turkish debt at the fastest pace in two years. Adding to the unease, Erdogan and his allies have suggested they might be victims of a foreign plot by the US, which until now has enjoyed good relations with Turkey. The US Department of State has called the allegations 'disturbing.'”

The first two weeks of the new year have vindicated this forecast. Last week, I had a series of discussions with the top five names of Turkey’s banking sector and several business executives who are symbols of corporate Turkey. They all said, without exception, that they had never experienced such a period in their entire professional lives and were now unable to predict what might happen in the next 24 hours. They all noted that they could not have optimistic economic expectations for 2014.

One of them who said Turkey’s projected 2014 growth rate, which was downward adjusted to below 4% by economic decision-makers, won’t actually exceed 3%. According to his analysis, which is not shared with the public, the growth rate will stay around 2.5%.

Being a writer who has heard from one of the very top names of the country that anything below 4% will strain the economy and might even nourish political turmoil, I was deeply worried thinking about the consequences of a low 2.5% growth rate.

Turkey’s Western allies, especially the United States and the European Union, are worried about the rule of law in Turkey and government defiance of the independence of the judiciary. Such concerns will no doubt influence the economy.

I asked the titans and CEOs of Turkey’s banking sector and corporate Turkey this question: "If you were investors who have the means for foreign direct investments in Turkey or if you were portfolio investment owners who had brought hot money to Turkey, how would you react to reading daily reports by media outlets such as The Wall Street Journal, Bloomberg, Financial Times, Reuters, The New York Times and so on, of what is happening in Turkey?”

Their answer was simple: If we were thinking of providing foreign direct investment, we wouldn’t choose Turkey. If we were hot money owners, we would have repatriated our money.

Because those I spoke with were Turks, and moreover "truly patriotic Turks,” they would not take such action against their own land. Nevertheless, since they know best the mindsets of those with access to foreign direct investment and hot money, what they said was scary.

The world already is aware of where the situation may be heading. This is why I am one of those who was not surprised by reading these lines from the Guardian:

"But Turkey's political stability, until recently the country's most prized asset, is in peril after the eruption of a corruption scandal that led to the resignation of four cabinet ministers and, some say, may unseat the prime minister. It followed a summer of street unrest that also shook Erdogan's international credibility.

Of course, Erdogan and his aides are aware of such assessments. For them such judgments are self-fulfilling prophecies. They cite such opinions as evidence of an “international conspiracy” they claim Turkey is facing and appeal to Turkish public opinion with xenophobic nationalist discourse to help consolidate their power.

At this point, we can understand why Erdogan suddenly declared that Turkey has no ambition of becoming a global and regional power. After years boasting precisely the opposite of what he just said in Japan, Erdogan’s new line is an effort to recalibrate the policies that he had introduced. Erdogan now feels compelled to recalibrate many issues, including foreign policy and Turkey’s image.