Against the backdrop of Israeli attempts to blame President Mahmoud Abbas for the failure of the peace talks, a new study recommends immediate steps to separate from the Palestinians, thus preserving Israel’s Jewish-democratic character. 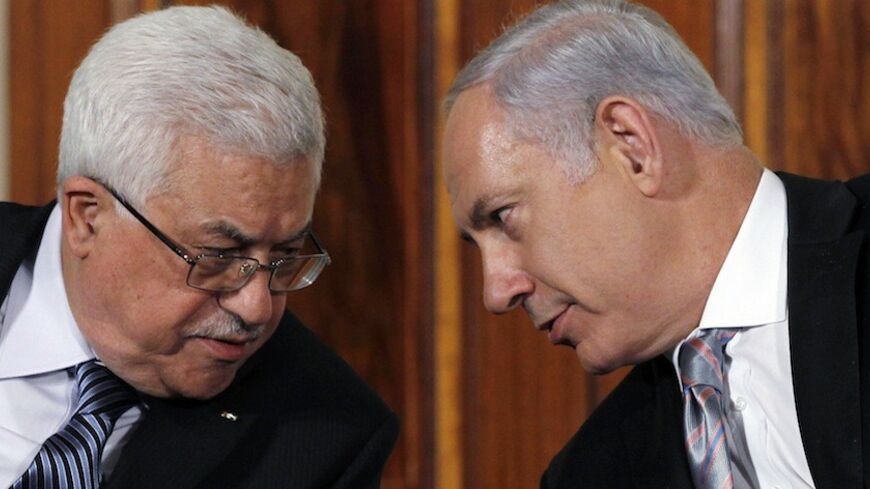 A week ago, I thanked Israeli daily Yedioth Ahronoth commentator Shimon Shiffer for exposing what Defense Minister Moshe Ya’alon really thinks of the US attempt to advance the two-state solution. This week we should be thanking Economy and Trade Minister Naftali Bennett for exposing the pathetic attempt by Prime Minister Benjamin Netanyahu to place the blame for the failure of said attempt at the door of Palestinian President Mahmoud Abbas (Abu Mazen).

Bennett’s sharp protest against Netanyahu’s “proposal” to hand Palestine responsibility for tens of thousands of settlers, forced Netanyahu’s office to admit that it was nothing but a spin. Netanyahu’s people went one better by blaming the leader of HaBayit HaYehudi party for disturbing the prime minister in the execution of his heroic duty — exposing the real (meaning, rejectionist) face of Abbas. Were it not for Bennett’s big mouth, Netanyahu’s associates claimed, Abbas would have rushed to reject the “proposal” to host a Jewish minority in his state, and would have borne responsibility for the failure of the negotiations. Hallelujah! As Ya’alon said, finally, Kerry will be getting out of our face.

The true face that was exposed in this sad affair is actually Netanyahu’s. More to the point, it revealed what Netanyahu thinks of the faces of Israeli citizens. One has to be a complete idiot to believe that an Israeli government would leave the uprooters of trees and burners of mosques to the mercies of their Palestinian twins. Just the other day, this very same government blamed the Palestinian Authority for inciting Palestinians to murder Jewish children.

If one can hand over responsibility for the safety of the settlers of Yitzhar West Bank settlement and the Jewish Quarter of Hebron to the Palestinian government, why shouldn’t we remove the barbed wire fences surrounding their homes? We could then relieve of their duties the thousands of soldiers deployed around their settlements, remove the dozens of barriers placed on the roads of the West Bank and open the bypass roads (meant for Jewish traffic) to Palestinian travelers! Everyone understands that the Palestinian authorities will not allow the settlers to bear arms. Why doesn’t Netanyahu relieve them of their weapons right now?

In August 2013, Abbas told members of the Meretz Party’s Knesset faction who visited him at the Muqata'a that if the idea of leaving the settlers in the West Bank is put on the negotiating table, he would refuse at this stage to commit to leaving this or that settlement, although he’d be willing to discuss the details. In a talk with Al-Monitor, Meretz chairwoman Zehava Gal-On said that this message had been conveyed to people tied to Netanyahu’s office. “Netanyahu knew exactly that this is Abu Mazen’s position,” Gal-On said. “The spin he created now to expose Abu Mazen’s true face is ugly, given that Abu Mazen’s position has been known for a while and there was no need to expose it.”

Netanyahu needed the new spin as an alternative to the demand to recognize the State of Israel as a Jewish state (which was a substitute for the demand to halt terror). Al-Monitor has learned that despite the vehement opposition of all his aides and associates, Abbas is refusing to say “no” to US Secretary of State John Kerry and is even willing to swallow the hard-to-digest pill of recognizing Israel as a Jewish state. He just wants Kerry to get clarifications from Netanyahu regarding the practical meaning of the “Jewish state” definition. Will the Jewish state ensure complete equality for the Arab minority and the Arab towns and villages? Will the Israel Lands Authority and the Jewish National Fund sell lands to non-Jews? Do the Jewish people include non-Jews who underwent a non-Orthodox conversion? These and additional such queries also interest quite a number of Israelis who take the trouble to look in the mirror and examine their true face.

In reaction to the reaction by Netanyahu’s office to Bennett’s reaction, Justice Minister Tzipi Livni reminded us, “The goal is not to remove the mask from the other side’s face and to prove that there’s no partner, but to achieve an agreement that will serve our interests.” In whose name is she speaking — the leader of the Hatnua Party (which has six Knesset seats, as we know) — whom the government put in charge of negotiations with the Palestinians? Does she represent Netanyahu, who promised not to evacuate a single settler? Is she speaking in the name of Ya’alon, who said in an interview he gave Haaretz in 2012, “After land-for-peace became land-for-terror and land-for-rockets, I am no longer willing to bury my head in the sand. In the reality of the Middle East what is needed is stability, above all. Stability is achieved not by means of imaginary agreements on the White House lawn but by means of defense, by means of a thick stick and a carrot.”

Does Livni represent Foreign Minister Avigdor Liberman, who conditions his support for an agreement with the Palestinians on stripping Israeli citizens of their citizenship? Does she enjoy the support of Interior Minister Gideon Sa’ar, who said in a speech he gave in the town of Ariel in December 2011 that “establishment of a Palestinian state will be a move fraught with dangers. … We will not endanger Israel’s security based on unrealistic wishes.”

Following his famous Bar-Ilan speech in 2009, in which Netanyahu first spoke of the two-state solution, Minister Benny Begin, who was then a member of the diplomatic-defense cabinet, said, “The two-state idea was not debated in the cabinet and will not be debated in the cabinet. This is not the government’s position and therefore it enables a person like me to be a member of the government, based on the understanding that there’s no such reality of two states.”

This political reality has not changed under the current government. More to the point, it has moved to the right. Nonetheless, the international reality is changing, and not in Israel’s favor. In a document compiled at the Institute for National Security Studies in advance of the institute’s annual conference, experts estimate that if the diplomatic process fails, the Palestinians will move on to “Plan B” — full international recognition of Palestinian independence within the boundaries of the West Bank and the Gaza Strip. If they do not succeed, the public and political debate will focus on a binational solution, which is expected to win support in the international arena.

The document notes that unlike the Palestinians, Israel did not prepare an alternative plan in case the current round of negotiations and the entire diplomatic process fail. “Furthermore, in contravention of rhetoric endorsing the idea of 'two states for two peoples,' actions and operative decisions, especially those related to continued construction in the settlements, attest to a preference for the current state of affairs — presumably based on the assumption that the status quo, where Israel controls most of the territory without limitations on freedom of action, is the best situation for Israel.”

The document was compiled by Gilad Sher, who headed the Israeli negotiating team with the Palestinians at the time of the Barak government; Brig. Gen. (res.) Udi Dekel, who was head of the negotiations directorate in the Olmert government and formerly the head of the Israel Defence Force’s strategic division; and Anat Kurz, the institute’s research director. The authors note that “nevertheless, the regional threats actually highlight for Israel the necessity of separation from the Palestinians.” They suggest that Israel launch talks with leading Arab League states and express willingness, in principle, to renew the multi-party format and to recognize the Arab Peace Initiative as a basis for the beginning of a regional diplomatic process.

The researchers, all three devout Zionists, are urging the state’s leadership to grab the wheel and steer toward the goal — preservation of Israel’s Jewish-democratic character and the strengthening of its regional and international standing. They recommend taking immediate steps to separate from the Palestinians — with some form of understanding or in a coordinated, unilateral move — and to prepare for the day when the settlers are called upon to return to the boundaries of the State of Israel.

Lest there be any doubt, the important document does not suggest moving tens of thousands of settlers to Palestinian exile. It does not contain any strategic recommendation to the heads of state to keep treading water and playing at mask removal.