US Secretary of State John Kerry recognizes that Israel will only accept a deal that will strengthen Israel’s security in the Jordan Valley. 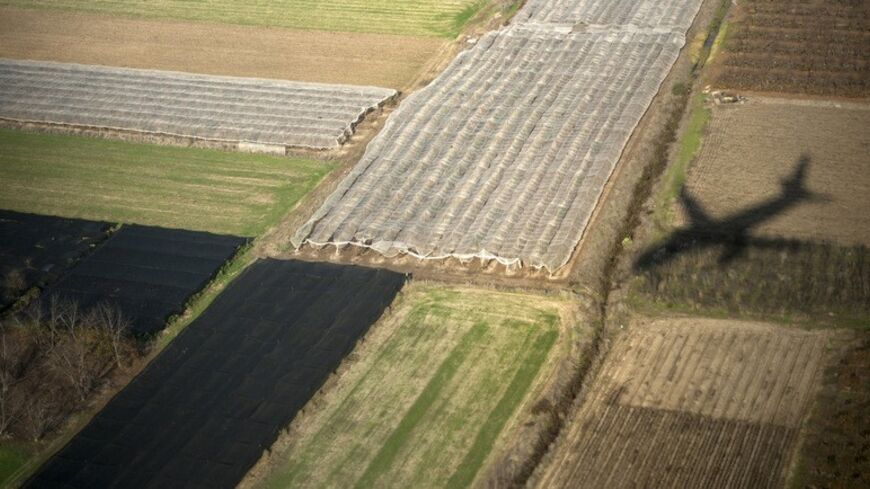 The plane carrying US Secretary of State John Kerry casts a shadow on fields as it approaches Ben Gurion Airport near Tel Aviv, Jan. 2, 2014. - REUTERS/Brendan Smialowski

Kerry had little luck in Israel on Jan. 2 when he met with Israeli Prime Minister Benjamin Netanyahu. And judging by Kerry's impromptu remarks to American students — "I am a believer in the possibility ... we could achieve something, but it will be very, very difficult" — his day on Friday, Jan. 3, was not much better.

Six months ago, the indefatigable secretary of state claimed success in arranging direct discussions between Israeli and Palestinian delegations. Kerry evidently had hoped that with the help of a US facilitator, Israel and the Palestine Liberation Organization (PLO) could work out a diplomatic road map on their own. To date, however, these talks have succeeded only in illuminating the gaps between the two sides on the host of issues confronting them, and the inadequacy of the initial US effort to facilitate a peace agreement via this dialogue of the deaf.

This failure is now viewed by Kerry as an opportunity to climb yet another rung higher in the ladder of US involvement — to save the floundering enterprise by raising the stakes — putting US ideas on the parameters of a final status agreement on the table, and pressuring both parties to contemplate the costs of stiffing Washington.

Facing expectations of progress before April, Kerry traveled to the region just as the new year dawned to discuss this new passion — a framework agreement. But he faced Israeli and Palestinian leaders united in their focus on critiquing Kerry’s security envoy retired Gen. John Allen’s recommendations for security in the Jordan Valley presented last month.

Netanyahu approaches Kerry’s effort with the assurance of unparalleled strength. Broadly speaking, Israel sees the upheavals throughout the Arab world, as well as the international focus on pre-empting Iranian nuclear weapon capability, as providing an unprecedented prospect for Israel to make strategic gains throughout the region.

US Chairman of the Joint Chiefs of Staff Gen. Martin Dempsey recently spoke about the historic turmoil throughout the Arab world creating what he termed a "strategic opportunity for Israel. There’s no state right now that’s threatening Israel, as there was just 10 years ago.”

Dempsey continued, “Egypt’s unstable, Syria’s unstable, Jordan is struggling. So — and not that Jordan was a threat to Israel in the first place, but the point is, Israel’s got a strategic opportunity, and I think they are beginning to think themselves about how to take advantage of it.”

Israel could take advantage of this opportunity by achieving what is widely considered its most fundamental objective: the establishment of secure and recognized borders. Such a strategy would be most welcome. But working against this outcome is the seductive opportunity that Dempsey himself referred to — Arab power has never been more fractured as it is today. And Arab weakness creates for Israel an opportunity to exploit the US interest in an agreement to consolidate critical gains in the West Bank and elsewhere in territories conquered in June 1967, and to expand its power regionally.

A telling insight into Israel’s pursuit of this objective has been clear in the ongoing talks with Kerry. Israel, generally speaking, supports Kerry’s effort in the same fashion as it supported the process culminating in the Oslo II agreement almost two decades ago — that is a tool for winning international (read US), Arab and Palestinian recognition of its wide-ranging security and settlement interests in the West Bank.

A key issue today for Israel and Palestinians alike is the future of the Jordan Valley, whose profile was raised last month in a security plan developed by Allen. For now, both Israeli and Palestinian complaints are restricted to security and sovereignty issues. But do not discount an Israeli interest in winning support for the permanent presence of Israeli settlers in this area as well. Minister of Defense Moshe Ya’alon has said as much recently.

The focus of extended discussions with Kerry, Netanyahu and Ya’alon was on a detailed Israeli critique of the Allen ideas for security in the Jordan Valley — a technical conversation in which Israel excels, and which puts Kerry at a disadvantage. His forte is establishing the broad range of issues and letting specialists iron out the security particulars. Netanyahu is signaling that he intends to determine the nature of discussions with Kerry, in this case on Jordan Valley security, and in so doing exercise some control over Kerry’s agenda — focusing on an exhaustive rebuttal of US ideas rather than cooperation in the preparation of a framework paper Kerry reportedly wants to introduce by the end of the month.

On a Jordan Valley security plan, as on the framework agreement he hopes to achieve, Kerry can only wish for a “yes, but ... ” from Netanyahu and Palestinian Authority Chairman Mahmoud Abbas. Yet, even such a qualified yes, achieved by George W. Bush and his stillborn “Road map to Peace” in 2003, appears at this moment to be beyond Kerry’s reach. PLO official Yasser Abed Rabbo, for example, has dismissed a framework agreement as a "worthless piece of paper.”

Kerry acknowledges that the test of an agreement will be to increase, not decrease, Israeli security. Kerry believes that creating a diplomatic framework that in principle limits Israel’s prerogatives on the ground can best accomplish this. Palestinians agree but want more restrictions on Israel than the Americans have offered in the Allen plan.

Israel, in contrast, wants to take advantage of the diplomatic effort to win acknowledgement of its wide-ranging current presence and control in the Jordan Valley and beyond, now and into the future. In Netanyahu’s view, Israel’s ability to determine the shape of an agreement with the Palestinians will pay critical dividends, as a prime example of Israel’s ability to make strategic gains in Palestine and beyond, in the broader contest with Washington over the shape of the new Middle East.