The future of political Islam: lessons from Turkey, Egypt

Islamist parties can either hold on to their rigid ideological base trying to mold their societies to fit within their singular vision, or accept their role as an influential force in a democratic pluralistic regime, within which the rule of law must guarantee the protection of rights for everyone, including Islamists. 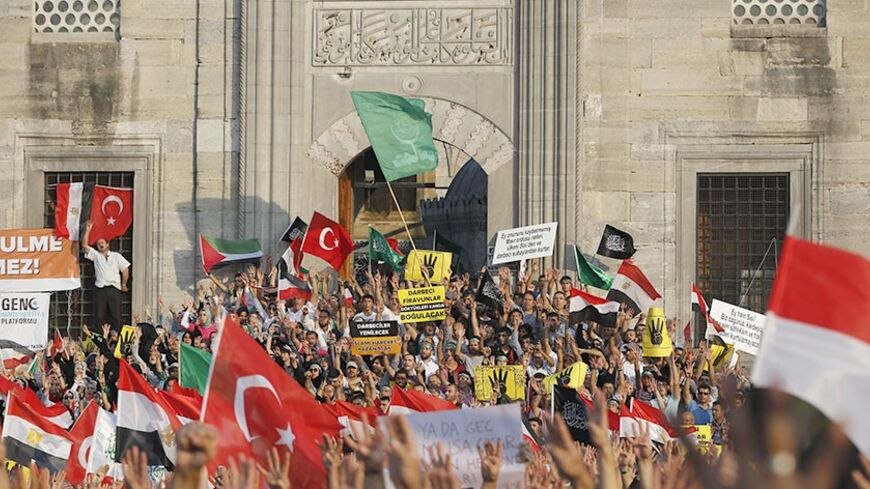 Supporters of Egypt's deposed Islamist President Mohammed Morsi and the Muslim Brotherhood wave Turkish and Egyptian flags during a rally outside of the New Mosque in Istanbul, Aug. 17, 2013.

Political Islam from protest to governing

Most Islamist political parties in the Middle East initially emerged as movements calling to apply Sharia and restore the caliphate state. By successfully incorporating religious claims within their agenda, these movements were able to launch powerful critiques against those regimes in the region that were undergoing a growing legitimacy crisis. They were also able to derive support from large segments of society that were frustrated with the corruption, authoritarianism and clientelism of these existing governments.

As protest movements, these Islamist parties never felt the need to develop habits of negotiation and compromise. Yet, their ideological rigidity has become a source of anxiety for many in the region who do not share their vision. The question before us is whether such Islamist political parties will replace secular authoritarian regimes with religious authoritarian ones, or whether they will be willing to become a part of the democratic transformations desperately needed in the region. The Justice and Development Party (AKP) government in Turkey and the short-lived experiment of the Muslim Brotherhood regime in Egypt provide us with rich narratives about the future governing prospects of these Islamist political parties. The future stability of countries in the region depend upon the ability of these Islamist political parties to shift from being rigid ideological movements to pragmatic political organizations, as well as upon the existence of other political forces that might assist in steering these political parties in this latter direction.

The AKP government in Turkey

The AKP’s initial success after its first election victory in 2002 was due to its ability to distance itself from the title of “Islamist” and define itself instead as “Muslim democratic,” in addition to its ability to initiate a broader political and economic agenda with democratic reforms at the center and its promise to become a government free of corruption. Such initiatives allowed the AKP government to build alliances with groups and movements that might otherwise have been skeptical of allying with a political party with Islamic credentials.

Until its third election victory in 2011, the AKP government maintained its reformist character by bringing Turkey closer to the European Union, initiating democratic reforms, avoiding populist economic policies in favor of providing sound public policy and removing the army’s tutelage from the political system. Unfortunately, the June 2011 election marked the end of such reformism. After consolidating its power with nearly a majority of 50%, the AKP quickly moved away from its previous pragmatic approach of governing through alliances and emphasized its Islamic credentials by introducing a series of policies directed at what many non-Islamists in Turkey considered to be lifestyle choices, such as alcohol consumption and the cohabitation of university students.

The eruption of protests across the country in the summer of 2013 were a result of the AKP’s increasingly authoritarian governing style. Rather than reading these protests as a public expression of discomfort — and taking the recent corruption charges seriously before declaring them a conspiracy against the government by the rival Gulen movement — the government is currently pushing legislation within parliament that will not only abolish the separation between the judiciary and the executive but which will completely consolidate the judicial and executive powers at the hands of the government. If the AKP is successful in pushing this legislation through parliament, the regime in Turkey will face a serious legitimacy crisis. The AKP is now governing over a society that is highly polarized along cultural and religious lines.

During its reformist stage, the AKP built alliances with the rest of society and derived support from non-Islamists on the basis of its promise of good governance. After deciding to emphasize its Islamist orientation more forcefully since the last election, the AKP has lost its shine as a role model for the rest of the Middle East, now becoming another autocratic government among others plaguing the region for a long time.

Egypt and the Muslim Brotherhood

Since 1948, when it was banned by the government following a wave of political assassinations, the Muslim Brotherhood has continued to work underground. Hiding behind legal facades, usually dummy front men who are obedient members of the organization, the Brotherhood has operated a growing network of interlinked businesses, charities, unions and mosques. Despite being an illegal entity, it has continued to recruit members, train militias, make alliances with spin-off terrorist organizations and even participate in the political process.

When the Brotherhood reached power in Egypt, Egyptians realized that the organization placed itself above the law and above Egypt. The Brotherhood enjoyed limited support that was inflated by its strong funding, superior organization and logistics and the fragmented nature of its opponents. However, the Brotherhood quickly moved to control all taps of power in the country according to “Tamkeen,” or the empowerment plan, appropriating thousands of government posts to its members and allies. Releasing convicted terrorists from prison and allowing mujahedeen to return to Egypt and make the Sinai Peninsula their safe haven, the Brotherhood also used its militias to attack, torture and kill protesters and journalists and put the supreme constitutional court, newspaper offices, opposition parties’ headquarters and the entire Media City under siege.

Islamist movements participate in national politics and democratic elections, although they neither acknowledge the concept of a nation-state based on a homeland nor the governance of democracy. They believe that any Muslim is a part of the umma, the nation of Islam. The difference between that and a union, such as the European Union, is that the latter is still based on nation-states with defined geographic homelands coming together under a unified government. The caliphate state that Islamists believe in is not based on citizenry of those who live in a specific territory or a homeland but one that is based on faith. Mahdy Akef, the Brotherhood’s former spiritual guide, explained that under the Brotherhood’s rule a Malaysian Muslim can become the president of Egypt, whereas a Christian can’t. The potential result of this is the breakup of a state such as Egypt into a Muslim state and a Christian state, similar to what happened in Sudan. Sayyid Qutb, who influenced the shaping of the Brotherhood ideology, sees homeland as “nothing but a fist of rotten dirt.”

Similarly, the Brotherhood — which claimed it was a “godly” organization and hence stood above the law — and other Islamist movements do not acknowledge that laws should come from the people, as they believe that God has given man legislations set out in the Quran, and that a committee of religious scholars should have the ultimate say in what laws are congruent with the word of God and which ones violate His will according to Sharia. Sharia itself is a huge and unlimited body of interpretations and fatwas including some dating back 1400 years. During the Brotherhood’s short rule of Egypt, they made sure to control the committee drafting the new constitution, including ambiguous articles that could in theory annul the constitution and laws through creating backdoors where “Sharia” may be invoked at will.

Islamists not recognizing the authority of “secular” laws or government take the “Taqiyya” — which allows a follower to lie, deceive or engage in illegal acts — to protect himself, his faith or more often the clandestine Gamaa Islamiya, its secret directives, sources of finance, inner workings and plans. They build a parallel state, a state within the state, which commands their first allegiance. Even after they reach power, regimes dominated by Islamist ideologies are bound to reach a dead end, because they are by conviction in conflict with society, its culture, vital interests and norms.

Middle Eastern societies are not a single monolithic mass of people waiting to discover their cultural essence. They are, instead, complex societies consisting of different ideologies, lifestyles and identities — including different ethnic, religious and cultural identities — with competing interests and objectives. The experiences of the AKP and the Muslim Brotherhood illustrate that Islamist parties have not completed their evolution from being rigid ideological parties, whose sole aim it is to remake their societies in their own image, to pragmatic organizations that are willing to represent and give voice to their followers in a pluralistic political environment.

We know that Islamist parties have their own societal base and will always be part of the political landscape. The nature of their evolution from protest movements to governing parties will play a key role in the future stability of regimes in the region. We have two roads ahead: Islamist parties can either hold on to their rigid ideological base, trying to mold their societies to fit within their singular vision, or they can accept their role as an influential force in a democratic pluralistic regime, within which the rule of law must guarantee the protection of rights for everyone, including Islamists. Only the second alternative provides a road to stability in the region. The first will only bring more destabilization, conflict and authoritarianism.