Iran must take swift action to save the dying Hamoun wetlands in Sistan. 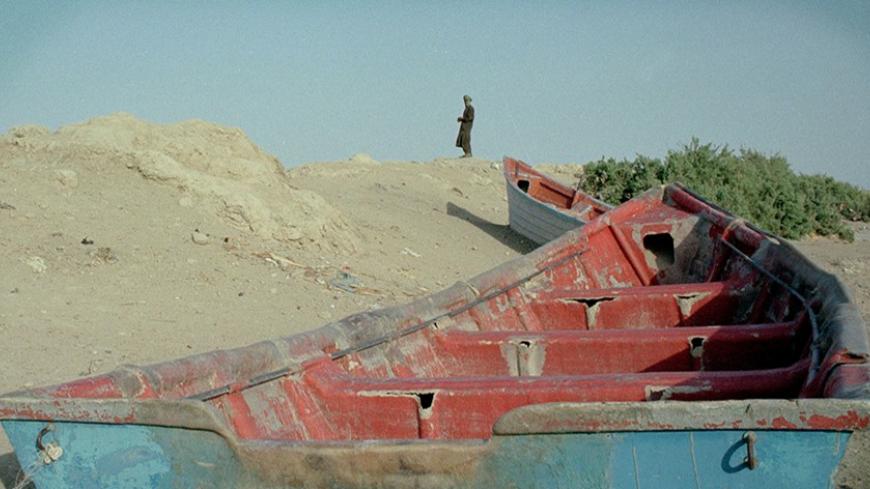 A fisherman looks out at the dried-up Hamoun lake which used to serve as a water supply for agriculture outside Zabol in south eastern Iran, July 17, 2001. - REUTERS
Gary Lewis
January 31, 2014

“Angels will kiss the hands of those who help us,” the man said.

The face behind the handshake was grizzled and weathered. The tanned, leathery skin bespoke years of harshness. The fisherman’s eyes welled with suppressed tears. He yearned for a time when his life was one of plenty. Lakes brimmed with water, he told me. And fish. His children were happy, and life was good.

I was so moved by his story that I impolitely forgot to ask his name. He wanted me to listen and then tell the world about the desperate conditions in Iran’s harshest, poorest region: the Hamoun wetlands of the Sistan region, in Sistan and Baluchestan province.

“Wetlands” is really not the right word, for now these lands are parched. There is little gainful employment to be had, and more than half the residents get by on welfare delivered through the Imam Khomeini Relief Foundation (IKRF), a parastatal organization.

They are — or were — mainly fisherfolk. Almost all are now unemployed. They live amid the decayed ruins of ghost-like villages built on the shores of once-thriving lakes. Winds howl around the creaking jetties, the empty fish markets and broken boats, which are strewn everywhere.

The Hamouns comprise three large wetland areas covering 5,660 square kilometers (2,185 square miles). Two-thirds of these wetlands are located in Iran, linked to and fed by water from Afghanistan’s Helmand river.

Twenty years ago, most of this area was green. Flora and fauna were abundant. The lake teemed with fish. The total annual catch used to exceed 12,000 tons. Fishermen would regularly haul in fish weighing 20 kilograms (44 pounds). The wetlands also supported agriculture and herds of water buffalo, providing a livelihood for thousands of families.

The development of dams and canals in Afghanistan started drawing off water to feed agriculture in the equally poor Afghan provinces of Kandahar, Helmand and Nimroz, and water levels in the lakes plummeted. Then came the building of four reservoirs within Iran itself, diverting more water.

I visited three villages — Takht-e-Dolat, Adimi and Kuh-e-Khajeh — and spoke with many residents. They were upset with the lack of water and wanted the government and the United Nations to help. The Sistanis feel nothing is being done to save them other than the cash handouts. They want to work.

“We are struggling for our very lives,” said one elderly lady, clutching at her two grandchildren. “See, this one is already dead,” she added, pointing to a sad-looking sandy-haired girl of five. “We don’t want ours to be the last generation to live here.”

There are approximately 400,000 people living in the Sistan area. A large number of them already live below the poverty line. The cash handouts they receive from the government or the IKRF rarely exceed $20 per month.

“We are fishermen; we have no land to farm,” said another woman. “If there is no fishing, we have no life.”

This environmental catastrophe has forced thousands to leave the region. The government indicates that in 2012 alone, as many as 5,000 families left the area. In total, 600,000 people have moved out. Most have trekked 2,000 kilometers (1,243 miles) northward to the Golestan province to start new lives, and others are scattered across Iran. The ones who remain simply get poorer and poorer, year after year.

What is striking is the pace of this man-made catastrophe. In just 20 years, livelihoods have been devastated. Easterly winds that once blew over the lake, acting as a natural air conditioner, now only stir up dust storms, bringing days of choking haze. Increasingly, they blow these storms back into Afghanistan — and even beyond, to Pakistan.

Most Iranians seem to know little about the plight of the people living in the Sistan Hamouns. By comparison, Iran’s most emblematic environmental catastrophe — the slow death of Lake Uromiyeh — gets massive media coverage and much political attention. But when I travelled there recently, I did not encounter the level of desperation and hopelessness I found in the Hamouns.

The solution to this situation will probably only be found if two key things happen.

First, Afghanistan and Iran must jointly agree on a course of action to more equitably share the water that each has apportioned and survived on for centuries. Two hundred years ago, there were no borders. What mattered then were communities and families with a common culture and a common narrative. Finding solutions was easier.

Second, Iranians themselves need to better apportion what little water does come through to Iran. Most of it is diverted into the Chah Nimeh reservoir system for drinking water and agriculture. Much of this water can still be allowed to flow naturally into the Hamouns, replenishing them and re-energizing their communities.

Iranians and the international community must respond to this tragedy, and they must do so now. Champions need to arise to work with the Hamoun dwellers and help revive their way of life.

Let the angels then decide whether — and where — to bestow their grace.