Hamas has accused Egypt's rulers of using the Palestinian group as a scapegoat to distract the Egyptian people from internal woes. 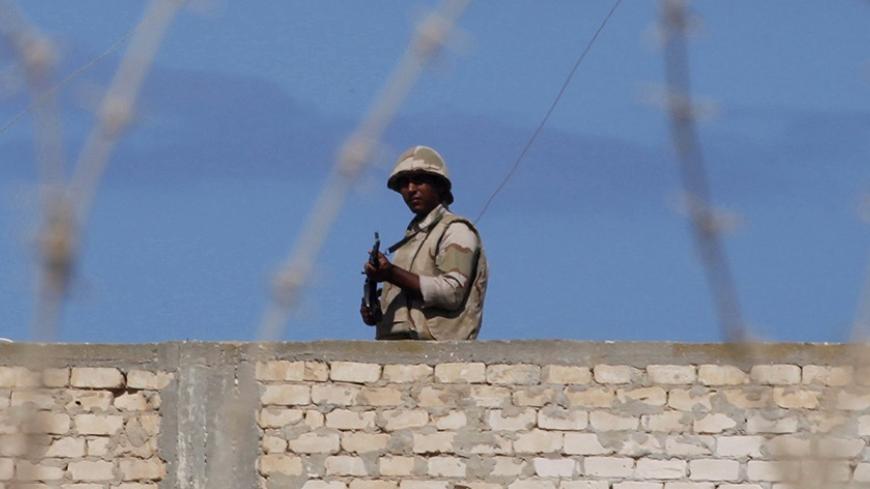 Relations between Hamas and Egypt have reached unprecedented levels of tension since the movement was founded more than 26 years ago. Even during the blockade imposed under Egyptian President Hosni Mubarak, the enmity and media escalation had not reached such levels.

Hamas has been on the receiving end of continued accusations by Egyptian media personalities, which it regards as part of the aggression being directed at any entity that has connections to the Muslim Brotherhood. Egyptian Interior Minister Mohammed Ibrahim’s declaration last week, however, constitutes a leap in finger-pointing at Hamas, accusing the Palestinian group of carrying out armed operations on Egyptian territory and training members of the Muslim Brotherhood to use weapons and manufacture explosives.

“Hamas provided logistical support to those who blew up the Dakahlia Security Directorate at the end of last December. It is also hosting members of the Muslim Brotherhood in the Gaza Strip, training them to use weapons and rockets with the help of the Salafist Ansar Bayt al-Maqdis [organization],” the Egyptian minister added.

Accusations from Egypt did not stop there. Another Egyptian official told Al-Monitor in a phone conversation, “Labeling the Muslim Brotherhood a terrorist organization has left Hamas two choices: split from [the Brotherhood] or join it in its classification as a terrorist group, since it organizationally belongs to it.”

“This choice has dangerous implications, however, for the Palestinian people, despite what is seen as Hamas' overstepping in Egypt. There are risks associated with the movement being listed as a terrorist organization both domestically and abroad. It is a fatal blow to the issue of Palestinian reconciliation, which has been mediated by Egypt in recent years. It is a dangerous decision that will shuffle the cards and increase the severity of [existing] divisions and tension in the Palestinian territories, which currently suffer from a state of instability,” the Egyptian official added.

Yasser Othman, the Egyptian ambassador to the Palestinian Authority, stated that Egypt wishes to return the Gaza Strip to its former state when it provided strategic guarantees for national security, without clarifying.

The Israeli website Tik Debka, known for its connections to the security establishment, revealed that the Egyptian authorities had clandestinely nullified 13,000 passports and visas for Palestinians in Gaza, the Sinai Peninsula and Egypt that belonged to Hamas. This came as part of a planned campaign against the movement, but Egyptian authorities have not yet made these actions public. Most of those whose passports and visas were canceled remain unaware of their nullification.

Egyptian media figure Ahmed Mansour, the producer and program anchor with the Qatari Al Jazeera network, spoke of Palestinian leader Mohammed Dahlan’s role in working with the Egyptian Interior Ministry to bring down Hamas to reassume power in Gaza. This is all as Egyptian Defense Minister Gen. Abdel Fattah al-Sisi, who ousted President Mohammed Morsi, promised him at the beginning of last July.

A senior Hamas official denied to Al-Monitor the latest accusations from Egypt, asking Cairo to cease what it referred to as “offenses.” The movement regards these accusations as dangerous indications that serve to delude the Egyptian people and distract them from the truth and scale of the crisis being endured by the ruling regime. It also claims Egypt is trying to place the blame for an internal crisis on external forces.

“Hamas is shocked that such lofty and dangerous accusations are coming from Egyptian officials, without any proof or evidence. They intend to break the brotherly relations that bring the two peoples together and allow the enemies of the Palestinian people, particularly Israel, to use these claims against them,” the official said, speaking on the condition of anonymity.

“Hamas has not trained or helped anyone from the Muslim Brotherhood,” the source explained, asking: “How can whomever received training in Gaza transport this to Egypt in light of the tunnels that have been destroyed?” He said, “The names that have been declared on more than one occasion to allegedly be members of Hamas have been fabricated, since the Palestinian civil registry disclaims them.”

Salah al-Bardawil, a prominent Hamas official, called on Egypt to stop what he called a "campaign to defame and incite against Palestinians” during a news conference attended by Al-Monitor in Gaza. He asserted the movement’s interest in the stability of Egypt and to avoid intervening in its internal affairs. He rejected such accusations, reminding journalists of those made by former Egyptian Interior Minister Habib al-Adly who implicated Hamas in the bombing of the al-Qidissin Church in January 2011. The Egyptian judiciary found these claims to be false.

Another Hamas official in Beirut, in a phone interview with Al-Monitor, characterized the accusations as lacking credibility. The official said they were aimed at drumming up hype about what he described as a “fictitious foreign enemy” in an attempt to show that there is a foreign conspiracy in Egypt.

“Hamas recognizes Egypt, its people and the weight of its role in the region. The movement is keen on its stability and security as a nation that borders Palestine. Hamas is fighting the Israeli occupation, but not any Arab entities,” the source said.

The Beirut official emphasized that it was not in the interest of Hamas today, just as it was not yesterday, to enter into a conflict with the ruling authorities in Egypt since its sole conflict is with the Israeli occupation. In other words, any other conflict would merely distract the movement from its fundamental conflict and divert the trajectory of Hamas weapons, as the source put it.

The Hamas spokesman in Gaza, Sami Abu Zuhri, however, hit back at the Egyptian ambassador to the Palestinian Authority, accusing him of interfering in Palestinian affairs. Zuhri said that Othman was holding ongoing meetings with security apparatuses in the West Bank, hearing fabricated stories from them against Hamas and passing those details to the Foreign Ministry in Cairo as if they were true reports.

The spiraling tension has dampened hopes of a thaw in relations. One Hamas official told Al-Monitor: “Egypt’s official discourse is close to painting the Hamas movement as a full-fledged state that is manipulating Egyptian politics and claiming everything that is happening on Egyptian territory is caused by Gaza.”