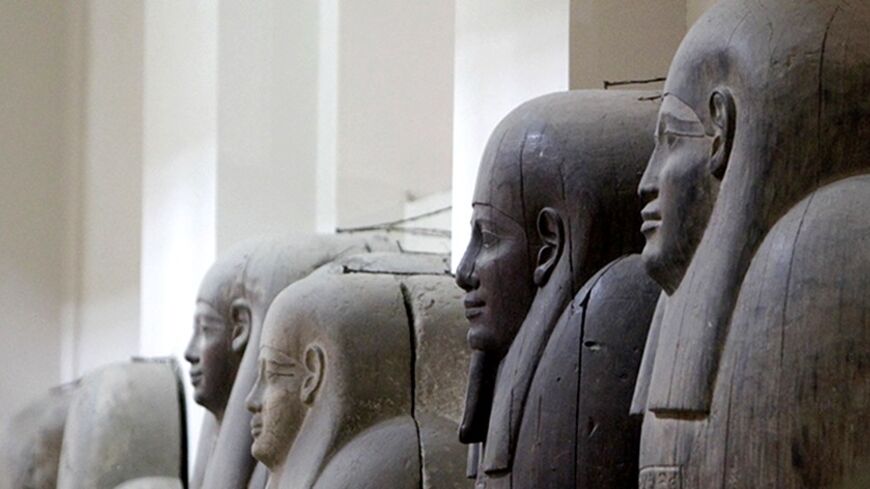 Egypt has recently succeeded in recovering 90 ancient artifacts that were to be sold in an auction house in Israel, according to a statement released by the Egyptian Ministry of State for Antiquities on Nov. 9. Meanwhile, Egyptian diplomatic efforts continue to focus on the rest of the auction houses spread throughout Jerusalem that publicly sell stolen Egyptian artifacts.

The spread of auction houses selling pharaonic artifacts in Israel is part of the file aimed at addressing Egyptian smuggled antiquities globally. For years, Egypt has made international efforts to recover these items, as part of a plan put in place by the Egyptian Ministry of State for Antiquities. The latest report issued by the department for recovered antiquities within the ministry, of which Al-Monitor secured a copy, noted that the most infamous Israeli auction house selling looted pharaonic artifacts from Egypt was the Arida Auction House. According to the report, the department for recovered antiquities learned that 90 pharaonic artifacts had been put up for sale there. The Egyptian Foreign Affairs Ministry, in cooperation with the Egyptian Embassy in Tel Aviv, succeeded in halting the sale of these 90 artifacts until the necessary measures were taken to prove Egypt’s eligibility to recover them.

The same report adds that the Ministry of State for Antiquities took international action immediately after it observed in the same auction house and another one, whose name was not mentioned in the report, the presence of up to 126 Egyptian artifacts, whose authenticity has been confirmed. They were displayed in the two auction houses in Jerusalem. The Egyptian Embassy in Tel Aviv addressed relevant parties until international efforts succeeded in preventing them from being sold. In addition, two pieces of a wooden lid of an ancient (pharaonic) coffin were observed in another auction house in Tel Aviv, according to the report.

The same report says that, from May 2012 to December 2013, the Egyptian government had succeeded in repatriating about 83 artifacts, through monitoring websites that promote the sale of such items. The report also noted that international efforts by Egypt resulted in halting the sale of 390 artifacts observed across the world, paving the way for their repatriation.

According to the report, “The 22 items retrieved in 2013 include two cartonnage pieces from the Ptolemaic period that were repatriated after being observed in an auction house in a French city, and proved to be among items stolen from the warehouse of the French Archaeological Mission of Saqqara. The first item depicts one of the four sons of Horus, while the second shows a female mourner.” ... “The ministry has also succeeded in recovering four glass artifacts observed in a French auction. The glass artifacts, which date back to the Ptolemaic period, are ornamented with stones and show different human body parts. They were proven to have been stolen from the museum in al-Qantarah al-Sharqiyah in the North Sinai Governorate.”

The same report adds, “The ministry had recovered an artifact — the head of a statue that dates back to the Roman period — from the Brazilian city of Petropolis. [This artifact] was taken from Egypt when a Brazilian tourist bought it in 1976. When he passed away, his daughter announced her wish to return the piece to Egypt, in accordance with her father’s will. Thus, the daughter and her mother contacted the Egyptian Embassy in Brazil.

“In addition, Egypt was able to recover seven artifacts from England. These items included pottery, stone pieces and two pieces of papyrus, in addition to a piece of limestone with hieroglyphic inscriptions in vertical rows. Also, the upper part of a statue depicting one of the noblemen belonging to the 26th dynasty of Egypt was also recovered. The said statue was smuggled to Belgium after it was looted with other stolen items from the Egyptian Museum in Tahrir Square on Jan. 28, known as the Friday of Rage. The ministry also recovered from Germany an artifact made from marble depicting the head of a lion, in addition to seven other artifacts recovered from England."

The report further notes, “At Paris’ Charles De Gaulle Airport, 233 Egyptian artifacts were seized and the ministry is exerting efforts on the international level to prove Egypt’s rights to recover them. In the same context, the ministry succeeded in establishing recovery rights through a judgment announced by a Danish court. Egypt was granted the right to repatriate eight wooden pieces dating back to the Islamic era. In 2008, the pieces were stolen off the wooden Minbar in Ghanim al-Bahlawan Mosque.”

“The ministry is also working to ensure the repatriation of a limestone carving, known as the carving of the seven perfumes, which was found in Switzerland. This item was among artifacts stolen from a cemetery in Saqqara. This comes in addition to other attempts aimed at recovering 16 artifacts found in the Xanthos auction house, a statue in Mexico, four pieces kept in the German city of Stuttgart and nine other pieces in Berlin," according to the same report.

Secretary-General of the Supreme Council of Antiquities Mustafa Amin told Al-Monitor, “All international laws and conventions grant the competent authorities concerned with antiquities in Egypt the right to preserve the artifacts and to track [the pieces] illegally smuggled outside the country. This is why we are adopting all legal and diplomatic means to recover the smuggled artifacts.”

Speaking of the artifacts found in Israeli auction houses that have yet to be returned, Amin said, “Diplomatic efforts have resulted in the prohibition of their sale and in [the Israeli government] seizing them. There are other measures to be taken in such cases in any country that has special galleries showcasing our smuggled pieces. Recovering the said pieces requires the completion of legal measures, after issuing a judgement against those who were selling them, proving that they don’t have the right to own the pieces. This is related to the applicable law of every country where the smuggled pieces were found and confiscated until the final judgments are announced. [Afterward] competent authorities would be contacted to officially receive the artifacts from the concerned party, which pays the shipping fees to Egypt.”

The issue of looted Egyptian artifacts remains unsettled, as Egyptian diplomatic efforts have faced difficulties in recovering these historically valuable items, despite the authorities tracking and observing them in auction houses around the world.