While Palestinian President Mahmoud Abbas has been adamantly against interim agreements, he has said he would consider a maximum three-year Israeli presence in the Jordan Valley if a peace deal is reached. 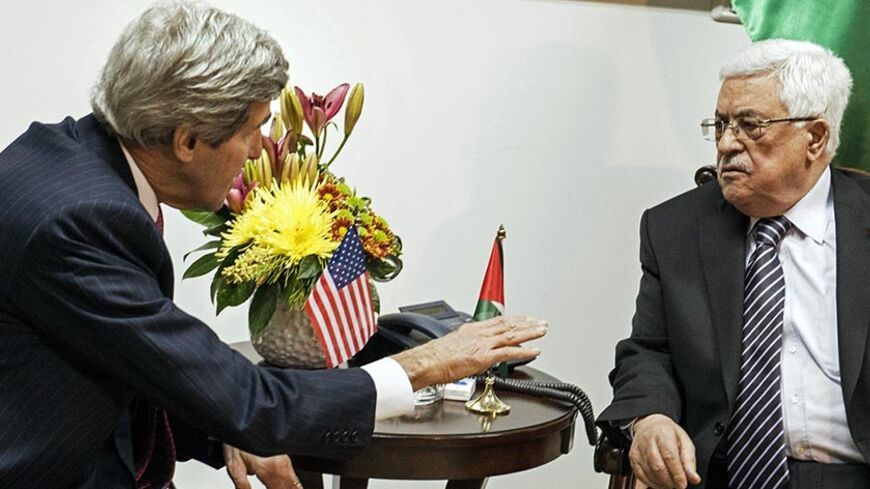 US Secretary of State John Kerry and Palestinian President Mahmoud Abbas talk at a meeting at the presidential compound in Ramallah, West Bank, Jan. 4, 2014. - REUTERS/Brendan Smialowski/Pool

The Dec. 15 visit by US Secretary of State John Kerry was cut short because of inclement weather. But Kerry, who brought with him four-star Gen. George Allen, has enough time to pass on the bad news. After Allen presented the US-designed security plan for the eastern borders of the future Palestinian state, Kerry transmitted the bad news. The Israelis are insisting that Israeli boots will stay in the Jordan Valley for 10, 15 and maybe as many as 40 years, he reportedly said.

After Kerry left, and as has become routine, Palestinian President Mahmoud Abbas called in what is often referred to as the “Palestinian leadership.” The loose term refers to trusted senior Palestinian officials, advisers and senior media personalities who are often debriefed and consulted with. If any Fatah Central Committee members are in Ramallah, they are usually invited, and some — but not all — PLO executive committee members are often welcomed to these meetings.

A senior official of the Rami Hamdallah government confirmed to Al-Monitor details of this meeting, saying that Abbas was livid about the Israeli offer transmitted via Kerry. The official, who asked not to be identified because of the understanding with Kerry that neither Palestinians nor Israelis are to publicly state the details of closed meetings, said that the Israeli offer shows their lack of seriousness. “They can’t expect Palestinians to wait another 40 years before Israeli soldiers would leave,” he said.

If Abbas was angry that cold December day, his anger seemed to have subsided this week when he spoke to an Israeli security gathering. Abbas addressed by video the Israel National Institute for Security Studies and dealt with the issue of the Israeli army presence. Abbas indirectly acknowledged that Israelis might have some justification for being worried, but insisted that the Palestinians would only tolerate the Israeli army presence in the Jordan Valley no longer than three years. In explaining the need for transition, Abbas said that both Israelis and Palestinians need a "reasonable time frame" for the transition period.

In the video interview aired on Jan. 28, Abbas talked about the post-transition period, saying that Palestinians accept the need for a third party after the Israeli army withdraws. The Palestinian president said he is open to any party but publicly named NATO as a possible party that both sides could accept to control the borders in the period after the departure of Israeli soldiers. No time frame was mentioned by Abbas for how long this third party could stay in the Jordan Valley area.

Israelis who watched the video of Abbas saw a Palestinian leader who, while insisting on Palestinian basic national demands, has great understanding of Israeli needs. In the very first question of the interview, Abbas publicly and forcefully acknowledges the cooperation between the Palestinian security forces with both Israeli and US security forces. He spoke of capturing weapons and putting away individuals who are trying to use violence against Israel. Abbas clearly said the days of using violence are behind us and that Palestinians, including Hamas, are committed to popular nonviolent resistance.

Abbas’ words of cooperation with the Israelis didn’t please many of his opponents. Al Aqsa TV, Hamas' mouth piece, posted the interview on their YouTube channel under the title: "Very Dangerous: Did Abbas say that our security are agents for Israel and the US?"

The Palestinian offer of a three-year transitional period seems to be backtracking from Abbas’ insistence on refusing to sign any more interim agreements. The Palestinian government official interviewed by Al-Monitor said that any peace treaty in the world has some sort of time frame, and that it is unreasonable to expect immediate Israeli withdrawal the moment a peace treaty is signed.

Almost 47 years after the Israelis occupied the rest of Mandatory Palestine, this proposed transitional window for the Israeli army to leave the Jordan Valley, if accepted by Israelis, would be welcomed by most Palestinians. The big question remains whether and when Israel will accept such an offer.