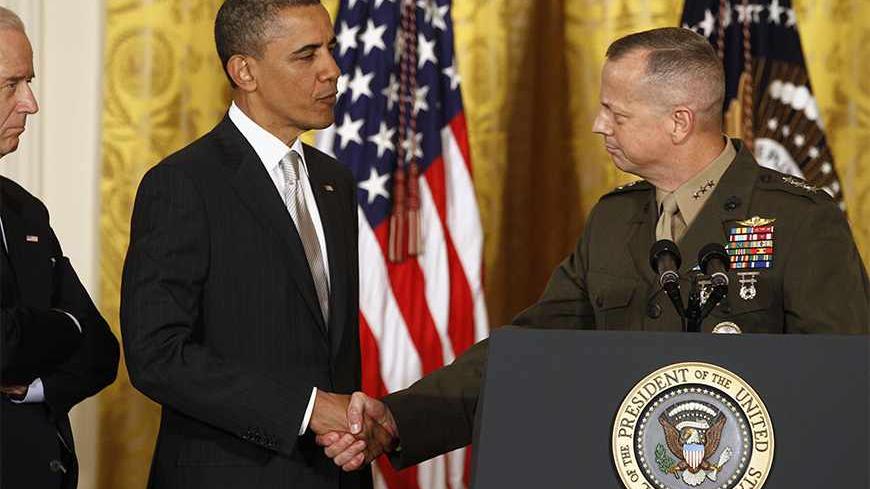 US Marine Gen. John Allen shakes hands with US President Barack Obama at an event in the East Room of the White House, April 28, 2011. - REUTERS/Larry Downing

Lots of ink has been devoted to the formal negotiations that commenced in midsummer between Israeli and Palestinian negotiators. An arguably more important undertaking, however, has been led by recently retired four-star Marine Corps Gen. John R. Allen, former commander of NATO forces in Afghanistan, to come up with a made-in-America solution to Israel’s security needs on its “eastern front” — across the Jordan River eastward to Iraq and Iran. Unlike the diplomatic track, whose failure to get out of neutral is subject to much informed and uninformed commentary, Allen’s effort has largely succeeded in maintaining a low public and political profile.

This is in inverse proportion to the issue at hand. Allen and a team drawn largely from the ranks of serving US military officers are in the broadest sense trying to define the security architecture of a peace agreement between Israel and the Palestinians, particularly as it relates to Israel’s strategic security. He is looking at how Israel’s security can be increased as part of an agreement — through redeployment of the Israel Defense Forces (IDF) behind recognized borders and the creation of a third-party monitoring presence. His recommendations were passed on to Lt. Gen. Benny Gantz, IDF chief of staff .

The United States has traditionally bowed to Israel’s own expansive assessments on this issue, so the very fact that US policymakers are instructing their own generals and colonels to think critically about defining and addressing Israel’s security needs is a topic of concern to many Israeli officials and politicians, who will not easily surrender their absolute control of both the negotiating agenda or its practical elements.

It is difficult to measure Allen’s effort directly. But it is possible to see evidence of the consternation it is causing in Prime Minister Benjamin Netanyahu’s effort to challenge the notions at the heart of Allen’s and more broadly the Kerry-led policy to facilitate a negotiated agreement. So, for example, Netanyahu has wrapped himself in the revered mantle of slain Prime Minister Yitzhak Rabin, the leader most associated with Israel’s uneven reconciliation with Palestinian nationalism, in reiterating opposition to any significant change in Israel’s military presence in and control over the Jordan Valley.

At a Knesset meeting in October marking the 18th anniversary of the Rabin’s assassination Netanyahu declared, “Our strength is the guarantee for our existence and peace. We do not want an Iranian offshoot in Judea and Samaria. This requires a security border in the Jordan Valley, as Rabin said in his last speech.”

And last month, citing concerns about an influx of refugees and terrorists from Syria. Netanyahu raised the prospect of constructing a new and improved barrier along the Jordan River.

Peace requires that the sides agree on “a security [framework] that can defend the peace and defend the state of Israel in case that peace frays. These security arrangements are important to us, and we continue to insist strongly on them,” Netanyahu told a weekly cabinet meeting.

The security arrangements “will no doubt include many things,” Netanyahu added, “but first among them will be that the state of Israel’s security border remains along the Jordan [River].”

According to the report in Maariv on Nov. 3, “In Netanyahu's eyes, creation of a fence may also send a message to the Palestinians opposed to an Israeli presence along the Jordan River and its control of the border crossings that Israel intends to defend its eastern border in the Valley and that it has no intention to evacuate in any agreement whatsoever.”

The announcement of support for a barrier separating the Jordan Valley from Jordan reflects political as much as security concerns. Indeed, for decades Israel derided the concept of physical barriers along its de facto borders as limiting both its territorial aspirations and freedom of military action, a view that is reflected today in the refusal of some West Bank settlements to build fences around their undefined perimeters.

Israel in recent years has nonetheless adopted a strategy of creating physical barriers around its entire perimeter — from Gaza in the south to the “blue line” separating Lebanon from Israel in the north. The construction of a barrier in the Golan Heights has been announced. The separation barrier in the West Bank is too a material reflection of Israel’s new focus on defensive operational strategy, framed as part, however, of an aggressive political intention to unilaterally determine the borders of the state.

Netanyahu's push-back in the face of a US diplomatic initiative to challenge this prerogative is not unexpected.

An earlier, similar US effort was attempted during the administration of President George W. Bush. In the wake of the Annapolis conference in November 2007 Bush appointed another Marine Corps general with an outsized reputation, James Jones, to “fly at 30,000 feet” to scope out how best to structure a security regime as part of a final status agreement.

Jones, like Allen, assembled a US military team, and a draft report was duly presented to Secretary of State Condoleezza Rice, who put it in drawer where it promptly disappeared. As the Annapolis effort progressed, Jones’ mission lost its initial focus. Instead of planning for security in the context of peace, its mandate was narrowed to improving the security environment on the ground in and around the market town of Jenin — from an Israeli perspective a far more manageable and acceptable objective.

Allen’s effort could suffer the fate of the Jones mission, becoming yet another victim of US intentions undermined by a loss of focus and lack of commitment to achieving the objective.

There is good reason to believe however, that there will be a happier ending to this story. For a start, the Obama administration finds itself today leading a broad reappraisal of key security principles throughout the region — most notably toward Iran. While no one is contemplating a diminution of US support for Israel’s security, it would be foolish to assume that the goal of increasing Israeli security by agreement with Iran would not have an impact on a US assessment of Israel’s security requirements on its eastern front. US and many Israeli security professionals have long believed that Israel’s demand for a controlling presence beyond secure and recognized borders poses a fundamentally destabilizing challenge to any agreement with the Palestinians, and that there are better ways of meeting legitimate Israeli concerns that would increase Israel’s security and also enable the state of Palestine — with Israel’s support and that of the international community to exercise sovereign control over its territory.

Palestinians and other Arab neighbors have been excluded from Allen’s mission, which remains focused on establishing a US view of Israel’s security requirements in an era of peace and introducing these concepts to skeptical and wary Israelis.