Yemen's National Dialogue is hindered by a lack of accountability and effective time management. 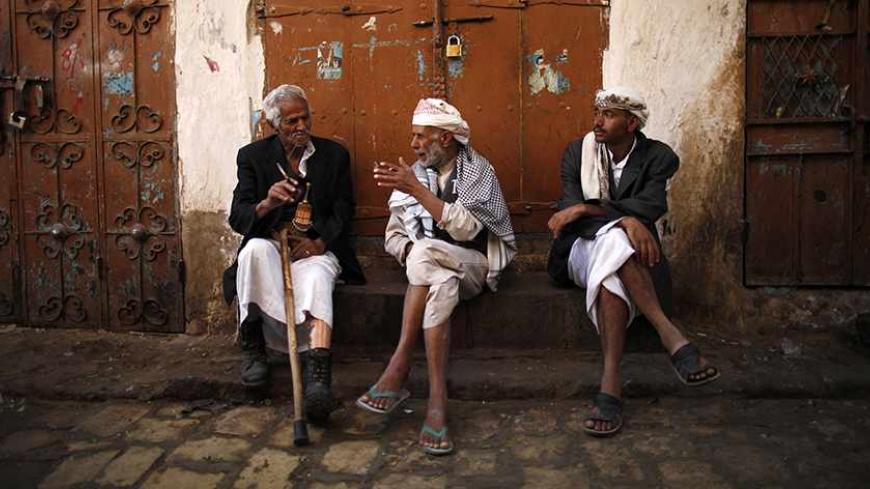 Rarely does a Yemeni activity start on time. And when that does happen, you’ll find that a number of participants have not yet arrived. A meeting may be delayed by more than an hour because the meeting’s chairperson is late.

Yemenis abhor this habit, but yet keep practicing it. They express the importance of punctuality for meetings with a saying: “It’s an English promise, not a Yemeni one.”

Official appointments and their associated meetings are often subject to last-minute changes. That rule has many exceptions, but they are nearly all confined to the educated elite who have had contact with other cultures. At the general societal level, the elderly are more committed and punctual, without any agenda for their daily appointments, which rarely changes.

One time at a restaurant, an old man waited in line for carry-out meals. He kept repeating, “Order, guys. Shame on you for cutting in [line].”

However, a young man standing in line cut more than once while ignoring the old man’s attempts to maintain order, so he shouted: “Damn whoever taught you, you are ignorant! Learn from me, even though I never held a book in my life. Damn you. You have dashed any hopes we may have had in you.” He then threw his meal ticket in their faces and left the restaurant without seeking a refund. He did not look back and continued cursing.

That old man’s generation is incredibly disciplined. They sleep before 9 p.m. and wake up at dawn with neither an alarm clock nor a wristwatch. It is a habit of the rural farming community, deep-rooted and hard to change.

In rural areas, farmers wake up daily at the crack of dawn and on the roosters’ crow, naturally and without the aid of any technology.

But the generation that staffs government offices, that holds educational certificates and embraces a superficial culture, have abandoned that cultural heritage and have not yet reached the threshold of an urban society having technological and information privileges.

If you must visit a government office in Sanaa or elsewhere in Yemen, never show up later than noon, or your appointment will automatically be postponed to the next day. This is because you will not find the employee you are looking for in his office after that time. And if you do find him, he will most probably tell you, “Come back early tomorrow. Are we supposed to know that you’d be late and postpone our appointments for you?”

Do not ask him what appointments he’s talking about. He would be going to either the qat market or to a restaurant where he will chew qat with his friends. (Qat is a herbal plant whose leaves most Yemenis chew in the evening and at night. It contains a stimulant with reportedly euphoric effects.)

If you’re thinking of complaining about this employee to his boss, do not bother. You will not find him in his office, either. If you do find him, he would tell you that it is difficult to change that norm and that you should just be more flexible and accept it.

At other times, you need months of follow-up to be able to reach the specific government worker who can complete your transaction, especially if it is a financial matter. Employees in the financial industry are especially favored by their superiors and their personal schedules indulged.

According to the best estimates and personal experience, Yemeni government employees waste three hours a day (out of the seven-hour work day, according to the civil service laws). So public offices are effectively open from 9 a.m. to 1 p.m., minus the time for breakfast, of course.

With no accurate statistics about the number of state employees, there are deep administrative imbalances. Many think it is about one million for the civil and military corps. Given that the annual working days per employee number 302 — after excluding weekly, national and religious holidays — about 906 million work hours are wasted annually in the Yemeni government sector. There are also no criteria for evaluating worker performance, except for teachers, who have specific lecture schedules. Business hours are uncontrolled. A worker requires one signature for showing up and one for leaving, but both are often signed at the same time.

Yemen started its financial and administrative reform program in 1995, but so far it has not succeeded in applying the fingerprint time-clock system for public-sector employees. It has made ​​partial progress in civilian jobs. But the military and civilian institutions are like protectorates whose leaders have chosen not to implement that system yet.

There are many employment redundancies and fake employment: Tens of thousands of names are recorded in the financial statements of the military and security institutions, but are practically nonexistent. In exchange for loyalty, the state has often granted tribal elders and military commanders dozens or hundreds of employee slots without any accountability of how many of those slots were filled or by whom.

So the issue of restructuring of the army and the security services is highly sensitive, even after the previous regime was brought down more than two years ago.

The old mechanism is still being followed. The local media has even uncovered memos filed by influential tribal figures to the president and prime minister nominating supporters to senior administrative positions (agents, ministries and provinces). Those requests were approved as part of the loyalty game and as part of dividing up public employment.

About 60,000 new employees were added in 2011 in the civil corps, and more than that in the army and the police because of pressure from military and police commanders who want to tip the conflict in Yemen in their favor, and they succeeded in doing so. This happened amid genuine fears that in a few months, the government would not be able to pay its employees.

Hiring plans and the Finance Ministry’s budgets are not made according to the needs of each governmental entity, but according to estimates about the growth in social demand. For example, the Education Ministry complains of a dearth of science teachers and a surplus in religious and social studies teachers. But the employment slots granted for that ministry still accumulates “stagnant goods.” According to 2004 population statistics, more than 56% of state employees are illiterate, while, ironically, the unemployment rate among university graduates is 54%.

Government waste in a poor country has resulted in morally corrupting the employees. A few years ago, the Civil Service Ministry subjected the ministry’s administration to a competitive bid. That successful experience was tried again by the governor of Taiz. But after the winners of three important administrative positions were announced, affected political parties intervened and — supported by government decisions — appointed replacements for them, as reported by local media a few months ago. It was as if breaking the system of favoritism is unachievable in all Yemeni governments and regimes.

The National Dialogue Conference is another example of time wasting, with plans to extend the transitional period.

Those examples are only a reflection of the Yemeni political mentality, which does not value time. In the rest of the world, time is gold. But Yemen is a country where not only oil, water and resources are wasted, but also time.