Modern, Western-style coffee shops are popping up in the affluent neighborhoods of Yemen’s capital, but the venues known for attracting intellectuals exclude the poor and conservative majority. 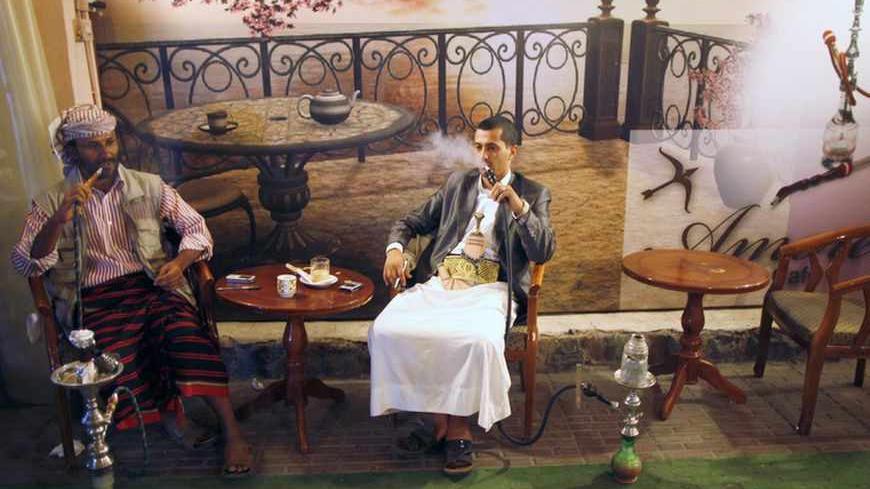 SANAA, Yemen — Over the past few decades, Yemen has been known to conjure images of serious conservatism, isolation between men and women and male dominance over issues pertaining to daily life.

However, things look different here: A group of boys, girls, men and women are having discussions in modern coffee shops, which have become popular in the past 10 years and have significantly become more common across Sanaa in the past few years, including the historical part of the old city. The coffee shops, however, are more concentrated in the southwest of the city, where the richest and most open neighborhood, al-Siyasi Hadda, is located. They have become posh meeting spots for the privileged classes that can afford it.

There are coffee shops with foreign names that largely resemble any coffee shop in Amman, Cairo or Beirut, but the difference here is that the stone buildings are more elegant and posh.

Waitresses — hailing from Ethiopia and East Asia, alongside a few Yemenis — wear uniforms and serve you with a gentle smile that you cannot find elsewhere in the city. In fact, you usually cannot so much as look at a woman’s body, even if she were covered from head to toe. One can typically see little more than the standard black abaya, or a niqab for the more conservative.

You can order hot or cold beverages and Western snacks, the names of which are unknown to many people. Moreover, you can spot the most modern and cleanest coffee shops if you do not smoke shisha [sweetened tobacco smoked with a water pipe]. Some coffee shops offer it for high prices, while others do not find it suitable to be served in their establishment.

Another common trait between the coffee shops is the availability of wireless Internet for keeping up with the spread of social media and its clientele’s need to be connected all the time, given the nature of their jobs.

Here, boys and girls find a space to meet up, talk, work and discuss — a space that was never available to the previous generation. Some study in groups for university exams, while others engage in heated political debates. Some discuss the idea of a civil society or just chat with friends, far from the eyes of the surrounding society and the world outside the walls of these different spaces of freedom.

Contrary to Yemen’s countryside and other less conservative regions, common public spaces for both sexes in a city like Sanaa were very hard to find in the past (except for some luxurious hotels and unpopular Ethiopian restaurants). It was as difficult as it would be for jihadists finding a public place to meet and plan in any Western city.

In remote rural areas, which remained until recently less conservative than Sanaa, men and women mingled in farming fields and even in khat-chewing gatherings. This phenomenon vanished entirely in recent years, even though it remains a behavior practiced by older women.

Until the 1990s and the beginning of the 2000s, Sanaa still had four cinemas and some theaters, before Islamist extremism invaded them via Yemen’s Wahhabi neighbor (Saudi Arabia), trespassing all ideological and geographical barriers. Moreover, this extremism has been recently promoted by Shiite Muslim clerics, including Houthis, taking on different forms such as the new religious police that control society’s freedom. Currently, female and male students are not mixed in schools. In a city that was struck by a huge political and military rift in 2011, that was made worse by the unsettling social and religious division in 2011 and 2012, such coffee shops provide a form of social and political communication that is dwindling in Yemen today.

Not only the youth, but also prominent politicians, elites, diplomats and foreigners frequent luxurious coffee shops in Sanaa from time to time, to enjoy an atmosphere conducive to communication that overcomes gender and political barriers.

These places are not exactly open to all categories of people, since they are pricey compared to coffee shops that are secluded and cater to a clientele with lower incomes. They are usually the destination of rich people, not the poor.

These coffee shops resemble ivory towers that cannot be entered by regular citizens — this is what critics hold against them. Indeed, they increase the gap between rich and poor classes and sometimes their frequenters resemble Orientalists who discuss the issues affecting regular citizens — from the high cost of living to security and political transformation — as outsiders.

These coffee shops include libraries that allow frequent customers to borrow books and read them while there. A glimpse at the books gives an idea of their content and leaves the impression that they are traditional consumer-oriented books. Some talk about “changing your life” in one or two steps, while others tell love stories and adventures in a conventional way that might be to the liking of high-class men and women. However, there are no deep social or political books. Moreover, English newspapers are provided to customers free of charge, even though more than 50% of Yemenis cannot even read and write Arabic.

At the same time, several youth initiatives have been launched from these cafes and discussion sessions are regularly held. During the youth revolution, they constituted an ideal place for the independent youth category, which does not have political or organizational centers to meet regularly and discuss their plans and thoughts on the revolution. Even after the revolution, dozens of members of the National Dialogue Conference used to frequent these coffee shops.

Most importantly, these coffee shops are among the rare places where one can see the glamorous beauty of Yemeni women, which is usually hidden behind the veil. Women who are likely to visit these coffee shops are the least committed to wearing the veil, which was introduced to Yemen with the Turkish invasion in its three stages (from 1536-1918).

While wearing the veil was previously limited to the cities, it has become widespread over the past few decades, especially after 1994, with the Wahhabi tidal wave came crashing in from Saudi Arabia through local proxies such as radical clerics.

Female regulars at these shops usually travel a lot and come from families who do not attach great importance to the veil.

Since the concept of these coffee shops has been recently introduced to the residents of the city hiding behind walls, curtains and veils, their owners and managers are usually foreigners who know Yemen very well. They are well aware that Yemenis are yearning for a liberated style of life and to phase out the burden of radicalism and gender segregation, which do not characterize Yemenis. Thus, these outsiders have seized the occasion and turned it into business opportunities, generating huge profit and providing jobs for Yemenis and foreigners as well.

Previously, the rare Ethiopian restaurants used to be the only places that received men and women at the same time, yet the majority of their customers came from the Ethiopian community in Yemen. It seems that Ethiopian restaurants were the first inspiration for the modern coffee shops, where you can find in almost every one of them an Ethiopian waitress taking the customers’ orders with a gracious smile.

These shops are not merely new spaces, but also social milieus to restore a culture that has long been known by Yemenis but was demoralized by the khat-chewing gathering that imposed gender segregation. These shops are seen by elites as places to communicate and exchange thoughts and ideas, regardless of the outputs. They are also perceived as channels of communication, even if only at the disposal of certain social classes, in a lively country of silent and repressed people. Yet, these shops continue to widen the deep gap between ordinary Yemenis and the old elites.

Furthermore, given the high prices of these shops, they are not known by all segments of society, as some people continue to be shocked when they hear about their quiet atmosphere and extravagant prices.

Nevertheless, regardless of their elite customers, these coffee shops remain a new phenomenon in the Yemeni capital, with its newly formed human gatherings and circles, which deserve to be contemplated and closely examined.

Farea al-Muslimi is a Yemeni youth activist, writer and freelancer. His work has appeared in The National, Foreign Policy, As-Safir and many other regional and international media outlets. On Twitter: @AlMuslimi