Over 200,000 Syrian refugees, most of them without legal papers, struggle to find shelter and work in Istanbul as winter sets in. 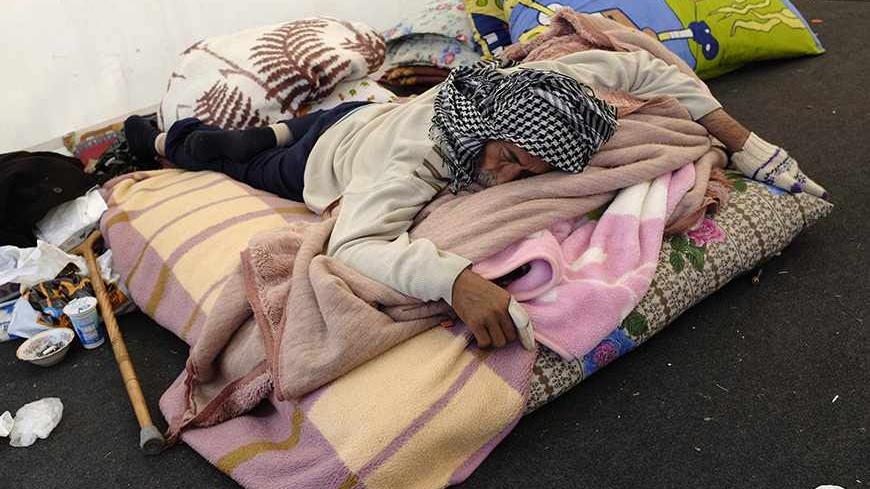 An elderly Syrian Alawite man sleeps in a tent at the courtyard of Pirsultan Abdal Cemevi, Istanbul, Oct. 11, 2013. - REUTERS/Murad Sezer

ISTANBUL — I was at the cashier of our local grocery store, chatting with another customer as I waited for my change. Suddenly, a small hand at the end of a thin smudged arm pushed us apart to put a couple of coins on the counter. In return, the grocer took two cigarettes out of a pack and pushed them toward the hand without a word.

The hand belonged to a boy, half the size of my 11-year-old daughter. As I watched him place one cigarette behind an ear and light up the other, I could not help but exclaim, "My goodness, he is what? Five, six? And smoking already!”

The boy either didn't hear me or didn't care to react. He walked away puffing, seemingly in a happy mood, unaware of the uneasy feeling that such adult-like behavior in so young a person had left in us.

We were silent for a moment. Then, the grocer said, “These are Syrian kids. They live here in the park now. Cigarettes are the least of it.”

That was more than three months ago. Istanbul was enjoying a mild late summer, and the roses in our neighborhood park on the shores of the Golden Horn were in full bloom.

The next day, during my morning jog, I saw them. There were half a dozen boys of various heights, running between trees, playing some sort of tag. The grass was wet with dew, and they were shoeless.

Behind them, sitting with their backs against the stone wall of the park were the women — mothers, aunts, sisters. There were no men and no tents. Only pieces of cardboard, two large plastic bags apparently filled with all their belongings, a few pots, one old blanket.

Passing by, I said, “Merhaba.” "Hello." They understood but did not respond except for a vague smile.

I suggested to a colleague who runs an online newspaper to send one of his reporters to the park. By then, the plight of homeless Syrians had not been in the news much. I did not know yet that there were hundreds of families taking refuge in other parks in Istanbul.

During the autumn months, they became much more visible. One would see them in the parks, under the trees near the bus stops, at the metro stations. Suddenly, the city seemed to be full of them.

They are among the women begging silently in busy marketplaces. Their children come running through traffic to car windows to sell a pack of paper handkerchiefs.

The traditional means of subsistence of the urban poor in Istanbul have become the refugees’ only chance to survive. But Syrians stand apart as they will not communicate except for the call for mercy in their eyes. To each other, they speak Kurdish or Arabic.

The men are harder to spot. They seldom spend the days with their families as they seek jobs that do not require them to speak Turkish. The “fortunate” ones are hired to work in sweatshops. Others wash cars, carry bricks, pull out weeds or just wait around to be picked up for a day’s work at a nearby construction site. Jobs are scarce, pay is irregular and — at its best — it is one-third of what a registered worker would earn for the same job. According to a survey by the Platform to Monitor Syrian Refugees in Istanbul, the average income of a refugee is $275 per month.

Turkey’s Disaster and Emergency Management Directorate (AFAD) claims that there are 600,000 Syrian refugees in the country. Of those, AFAD reports, only 201,000 reside in 21 government-run camps in 10 provinces.

Unofficial estimates for the total number of Syrians who have taken refuge in Turkey are higher — over a million, according to the Organization of Human Rights and Solidarity for Oppressed People (MAZLUMDER), 75% of whom live outside refugee camps.

On average, each family has five to six children and more than half of the Syrian refugees in Turkey are under 18.

Halim Yilmaz, vice president of MAZLUMDER, who wrote his organization’s 19-page report on the needs of Syrians in Istanbul, told me Dec. 2 that the refugee population has increased dramatically in the last couple of months.

“Over a million Syrian refugees are in Jordan and Lebanon each," he said. "We believe there are more in Turkey. AFAD counts those with documents only. Syrians who took the mountain paths to cross the border are not registered, and there’s no official body that is responsible for them.”

In mid-September, when MAZLUMDER issued its report, the number of Syrian refugees in Istanbul were estimated at 100,000. Yilmaz puts the figure at “well over 200,000” today.

How many of them are in the parks?

Yilmaz hesitates to give a figure. He says there are still 15 families in the Sirinevler Park, "but thanks to civil-society efforts, the overall number is much lower now.”

One such initiative is the Platform of Solidarity with Syrians in the Parks. They have a Facebook page where they gather information about the refugees in need, collect donations and search for affordable housing for them. So far, they have rented two shelters by paying the realtor’s commission, the deposit and the first few months’ lease.

Communal apartments in Fatih, Istanbul’s old district, are home to 100,000 Syrian refugees. When the Fatih municipal authority evacuated a coastal park due to neighbors’ complaints of refugees’ noise and trash, Pir Sultan Abdal Cultural and Solidarity Association came to the rescue and opened the doors of their cemevi to 150 Alawite Syrians, mostly from Aleppo and Idlib.

Alawites seem to make up a substantial part of the refugees in Istanbul. One reason for this is their unwillingness to stay in the Sunni-majority camps in southern Turkey. Muhammad, an Alawite of Turkmen descent, told Dalia Mortada of Public Radio International that they were scared of what would happen to them in the camps.

“I heard that there are people who are getting bribed in the refugee camps. … They get a tent or a container and food and blankets, but at night they’re given guns and are forced to fight.”

The family who lived in the park in my neighborhood was Alawite, also. Our doorman once took a pair of winter boots that did not fit my daughter anymore and brought them to the family. “They're Alawites,” he reported back, himself a devout Sunni. “It doesn't matter. They are people, and it's getting cold.”

Today, before I sat down to write this article, I took a walk in the park. The rain was heavy and a cold breeze blew from the sea. I looked around hoping to see the family and at the same time, wishing them gone to a warmer place.

They were not there.

I asked the police guards at the Istanbul headquarters of the Justice and Development Party across from the park if they knew what happened to the refugees.

“They were removed,” one of them told me. “With the party building, the convention center and all, they posed a security risk here.”