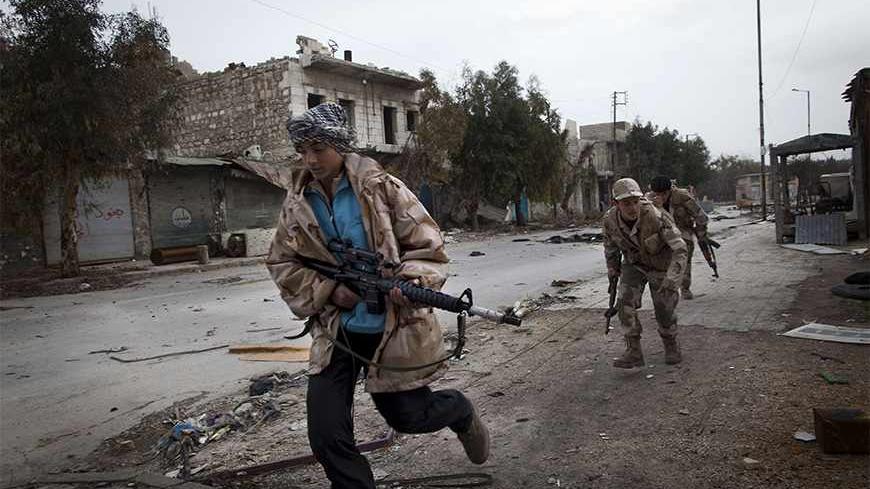 As al-Qaeda-linked fighters push for control over northern Syria, they have singled out a new and vulnerable target: the country’s small Turkmen minority. Over the past two months, the group known as the Islamic State of Iraq and al-Sham (ISIS) has been menacing a cluster of Turkmen villages wedged between the Turkish province of Hatay and the Mediterranean Sea. The Turkmen call the area  "Bayir," which means "cliff" in their native Turkish. On a recent night, I stood with a group of Turkmen fighters on the Turkish side of the border and watched a Syrian army tank positioned on a nearby mountain shell the villages at a slow but steady pace.

Yet, in a pattern that appears to be repeating itself across the country, relations between ISIS and the Turkmen who are fighting to overthrow Syrian President Bashar al-Assad under the banner of the Free Syrian Army (FSA) were initially cordial. When the ISIS militants first rolled in with their flashy weapons and SUVs they were on their best behavior. But soon they began replacing local schoolteachers and imams and preaching their rigid, unsmiling brand of Islam. "They called us 'Sufis' and 'apostates,'" Abdullah said.

Tensions flared when the militants began demanding that locals give up their daughters in "marriage" and that the Turkmen and fellow FSA fighters from Arab units cede control over the villages and raise the ISIS flag. These came to a head last month when a group of about 50 masked ISIS fighters raided a hospital in the village of Gevere, killing at least four people, including a Turkmen village elder who had come to parley with them. "First they shot them, then they cut off their ears and noses," said Yusuf Baldir, a Turkmen fighter with the Zaher Bibers brigade.

The Turkmen, who are scattered across Syria, face similar pressure from jihadist groups in Raqqa and Aleppo provinces. Baldir described the plight of a Turkmen woman in Aleppo who was gang-raped by ISIS fighters. "She hanged herself with a rope from the ceiling," Baldir said.

According to Oytun Orhan, a Middle East analyst with the Ankara-based ORSAM think tank, the Turkmen may soon become targets for Syria’s Kurds. The Turkmen confirm that their villages in the Bayir region are coveted by the Syrian Kurdish People’s Protection Units, or YPG. For the Kurds, who are locked in a bloody turf war with ISIS, control over the Turkmen villages in Latakia province would ease their ambitions to create an uninterrupted zone of Kurdish influence along the Turkish border. This, in turn, would give them access to the Mediterranean Sea.

The Turkmen’s troubles are hardly new. Descended from Turkic tribes who migrated to latter day Syria during Seljuk rule in the 10th century, the Turkmen claim that their numbers stand at some 3.5 million. Experts reckon there are around 200,000 Turkmen in Syria. Like the Kurds, Turkmen faced harsh repression under Baath rule. Both groups were denied cultural and political freedoms including the right to educate their children in their mother tongue. Their villages were Arabized. Thousands of Turkmen and Kurds were forcibly assimilated.

But, while the Kurds — thought to make up around 10% of Syria’s population — managed to hold the regime at bay by remaining neutral in the conflict, the Turkmen, who are also predominantly Sunni, were dragged in. When the Syrian uprising erupted 2½ years ago Bayir became one of the main transit points for tens of thousands of Syrians seeking refuge in Turkey. Their perceived collusion drew the ire of the Assad regime, which had long accused them of being a Turkish fifth column. "They arrested my two brothers for no reason," said Ibrahim. "When they were set free they were in pieces from all the torture, electro shocks and beatings," he added. As the pressure mounted, egged on by Ankara, the Turkmen joined the armed opposition.

But the bitter divisions that have paralyzed the FSA are mirrored among the various Turkmen brigades. Relations among their political leaders, most of who are based in Istanbul, are similarly fraught. Although the Turkmen are said to hold four of the 60 seats in the Istanbul-based umbrella group known as the National Coalition for Syrian Revolutionary and Opposition Forces, they feel they are underrepresented.

And now, says Baldir, the FSA is denying them their share of weapons sent from the opposition’s sponsors in Saudi Arabia, Qatar and Libya. "They are being hogged by factions close to the Muslim Brotherhood. Let alone guns and bullets, we are running out of food. We need Turkey’s help. Write this," Baldir pleaded.

Serif Cirkin, a lawmaker for Turkey’s far-right Nationalist Action Party, agrees that Turkey must arm the Turkmen immediately. "Unless they are given the means to defend themselves, the Turkmen will be driven out of Syria altogether," he predicted. "The government has left our Turkmen brethren in the lurch."

Matters have not been helped by the participation of Turkmen brigades in a joint FSA and jihadist assault against the Kurdish YPG in the town of Ras al-Ain in July. "Turkey gave us lots of ammunition then," said Amir Sohto, who fought in the battle within the ranks of the Turkmen Yavuz Sultan Selim brigade. "Many of the Kurdish fighters were women," Sohto recalled. "And they had amazing weapons." The YPG eventually prevailed, albeit with heavy casualties and sharpened feelings of enmity toward the Turkmen.