After the assassination of Lebanon's former finance minister, efforts must be made to protect Lebanon from further sectarian breakdown. 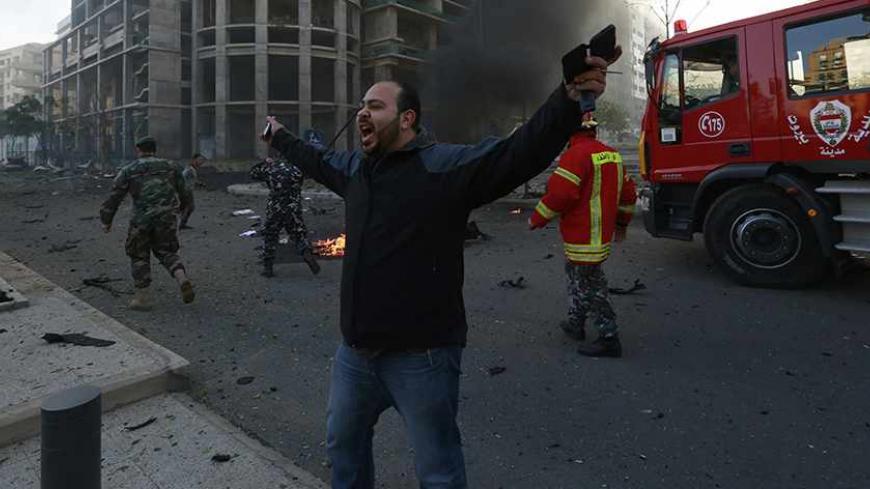 A security officer shouts as smoke rises from the site of an explosion in Beirut's downtown, Dec. 27, 2013. - REUTERS/Jamal Saidi

The Dec. 27 assassination of Ambassador Mohamad Chatah, the former finance minister of Lebanon, constitutes a serious escalation of dangerous tensions in Lebanon. Amid a resigned government, a dysfunctional parliament, an ongoing flow of Syrian refugees, periodic bombings, kidnappings and sectarian conflicts, Lebanon is vulnerable and will continue to be so as long as the Syrian crisis is not resolved during the forthcoming Geneva II conference.

With the growing sectarian polarization occurring among Lebanon’s neighbors Syria and Iraq, and the Palestinian question still unresolved, it is imperative to focus on Lebanon and its future once again, so that the transfer of power to a new president will take place amid a calm atmosphere of political reconciliation.

Chatah’s assassination brings the situation into a dangerous phase. Efforts must be intensified to shield Lebanon from further breakdowns and escalating sectarian divisions. While civil society and professional unions remain unaffected by the sectarian divide, it is hoped that this constitutes an opportunity for them to intervene, emboldened by their moral authority and potential roles as catalysts.

This might be the moment to recall the UN Security Council statement from July 10, which emphasized the priority of Lebanon’s stability. The statement urged the International Support Group, which included permanent members of the UN Security Council and EU foreign affairs representative Catherine Ashton, among others, to translate its commitment and thus prioritize ensuring Lebanon’s stability and unity. This is also the moment when the political establishment must expedite the formation of a government and parliament must resume its responsibilities.

We cannot underestimate at this moment the gravity of the situation in Lebanon. Its unity and stability would in turn be a contribution to efforts that aim to resolve many of the region's serious problems. Then Lebanon will hopefully resume its well-known moral and intellectual contributions throughout the Arab patrimony.