A survey indicates that Palestinian recognition of Israel as a Jewish state will encourage settlers to leave their homes in the framework of a future peace agreement. 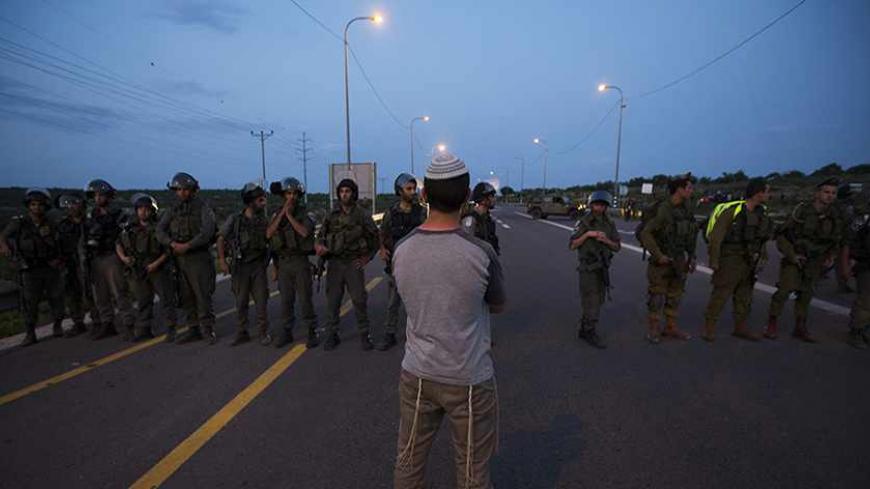 A Jewish settler stands in front of Israeli soldiers during a protest at the site of a stabbing attack by a Palestinian, at Tapuach junction, near the West Bank city of Nablus, April 30, 2013. - REUTERS/Ronen Zvulun

Many Israelis, including the writer of these lines, feel that Prime Minister Benjamin Netanyahu’s demand that the Palestinian leadership recognize Israel as the state of the Jewish people is only a ruse designed to thwart a peace settlement by transferring responsibility for its failure to the Palestinians next door.

While one can understand the demand for security arrangements in the territories and on the Jordan border, why is it necessary that one nation recognizes the religious identity of the other? We can find an answer to this important question in a new report by the International Crisis Group (ICG), “The Leap of Faith: Israel's National Religious and the Israeli-Palestinian Conflict.” This report, which summarizes research that maps the balance of power within the Religious-Zionist camp, and between it and the rest of Israeli society, gives details on a secret poll ordered by the prime minister’s office in 2010.

The survey revealed that the settlers living east of the separation fence are more likely to acquiesce to an evacuation without violence if the withdrawal is for a “genuine peace.” One of Netanyahu’s close associates noted to the composer of the report that the poll-takers discovered the most convincing step that would show that the arrangement constitutes a “genuine peace” in the eyes of this public is Palestinian recognition of Israel as the state of the Jewish people.

Ofer Zalzberg, Middle East and North African analyst for the ICG, told Al-Monitor that the poll's findings strengthened the hunch in the prime minister’s office that Palestine Liberation Organization (PLO) recognition of Israel as the state of the Jewish nation would convince a portion of Jewish skeptics that a permanent agreement with the Palestinians justifies far-reaching concessions.

The heads of the ICG, led by Thomas R. Pickering (a former US undersecretary of state for political affairs), understand the difficulty for the Palestinians in clearly expressing recognition of the state of Israel as the state of the Jewish nation. Such recognition would be interpreted as denial of their own historical connection to the area. Therefore, the ICG suggests that the Palestinian Authority and the PLO recognize Judaism’s historical connection to Palestine/the Land of Israel as the land of the three Abrahamic religions (as was done in the Palestinian proclamation of independence in 1988). In addition, the report recommends that the Palestinian leadership abstain from denying Jewish history, including the existence of the Temple Mount, and even be scrupulous in condemning such denial among its people.

Thus it is theorized that Palestinian recognition of the Jewish connection to the Land of Israel can constitute a tie-breaker. We can find support for this hypothesis in the interview given by Deputy Education Minister Avi Wortzman (of HaBayit HaYehudi) to Israeli news outlet Channel 7 on May 20, 2013. According to Wortzman, the first condition for peace is “Arab acknowledgement that the Jewish nation returned to its country and homeland.”

One of the leading religious Zionist rabbis and a follower of the Rabbi Abraham Isaac Kook (one of the founders of the religious Zionist movement) school of thought, expressed an unusual opinion to ICG researchers. He said that he and his “Kookist” friends would be willing to concede control over Judea-Samaria if they would be given the ability to influence the Palestinian curriculum. He did, though, express openness to the idea of forming a joint Israeli-Palestinian education committee, saying that this might be an expression of mutual recognition. Still, the rabbi did not go as far as inviting the Palestinians to influence the Israeli curriculum.

A different high-level personality in the National Religious camp suggested another formulation for mutual recognition: “The Palestinians would recognize the fact that Judaism preceded Islam and that the homeland of the Jewish people is from the [Mediterranean] Sea to the [Jordan] River, while the Jews would recognize the Palestinian historical connection to the land between the sea and the Jordan River, and to the city of Jerusalem in specific.”

The report suggests that in order to find a basis for mutual recognition, a dialogue should be held between imams and other Muslim religious leaders with the “Kookist” rabbis regarding educational content in a time of peace.

Zalzberg conducted about 100 interviews while focusing on issues connected to the conflict with the Palestinians and its resolution. He notes that together with mutual recognition, another factor likely to significantly diminish National Religious opposition is the option for Jewish residency in the Palestinian state. Although the Kookists would want to avoid living under Palestinian sovereignty, the research shows that there are quite a few of Kook’s adherents who, should a Palestinian state be established, would prefer to remain in their place as a community that would receive educational and cultural services from Israeli governmental ministries rather than be uprooted from their homes.

This category includes not only the neo-Hasidic factions such as that of the late Rabbi Menachem Froman but also the Tkuma people, who place special emphasis on the holiness of the Land of Israel. The report recommends that the government of Israel conduct an internal dialogue on the place of religion in peacemaking with the participation of leaders of all the Jewish sectors, including the National Religious stream. If, in the course of this dialogue, it is elucidated that any permanent agreement would be brought to a referendum and that understandings would be formulated according to which any agreement would be implemented in a manner respectful of the evacuees, the vast majority of the Kook-affiliated rabbis would accept the verdict.

Yet with all due respect to the importance of the recommendations, it should be remembered that attempts to appease the right-wing public did not bring about a change in its mind-set, but instead led to the strengthening of its political position. After the assassination of Prime Minister Yitzhak Rabin in November 1995, all of Israeli society was called upon to join together under the Tzav Pius (literally, “conciliation order” or national reconciliation project). Concern over the deep national divide led interim Prime Minister Shimon Peres and others in the peace camp to stop the Oslo process and direct their efforts to emphasize the commonalities among the sectors of the Jewish public. This change, of course, played into the hands of the "faith camp" that is always happy to invite its (nonobservant) fellow Jews “to join them around the traditional Shabbat table.”

The settler leaders have successfully taken advantage of the years that have since passed to deepen their integration into or takeover of power hubs in Israeli society, and blur the decision on partitioning the land. Many of them, including nonreligious Jews headed by former chairman of the settlement umbrella organization Dani Dayan, do not hesitate to proclaim their victory by saying that this blurring has created an irreversible reality in the territories.

Thus, the desire to achieve as widespread an agreement as possible is not a reason to evade making a decision. The Jews have already become a minority in the territories under Israel’s control between the sea and Jordan. If the prime minister is unable to enlist the support of his own party for the two-state solution, he must take immediate action to secure a referendum.

The one and only question that should be presented to the nation is this: Do you want to live in a state with a Jewish majority, or one with a Palestinian majority? The option for rule of the minority over the majority is one that has disappeared from the enlightened world.