Amid growing concerns over violent activity across Egypt, the country’s interim administration is taking steps to ensure the success of the planned constitutional referendum. 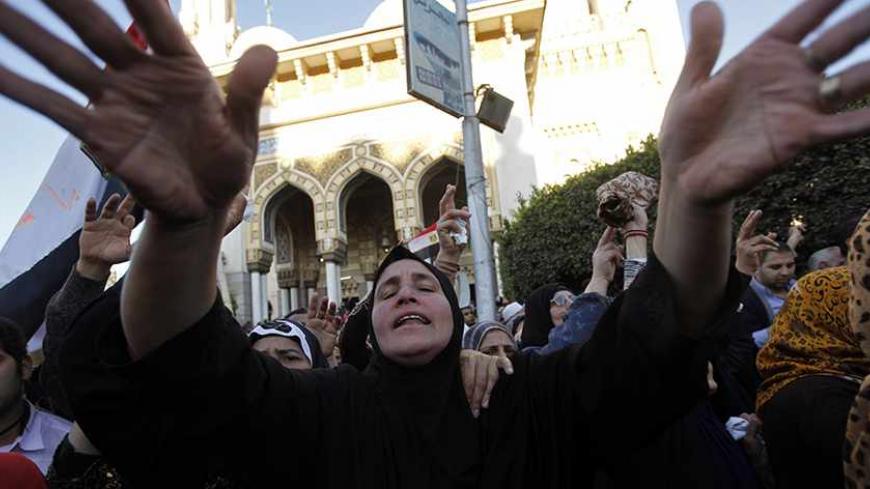 A woman cries during a funeral service for policemen and people killed in a car bomb explosion, Mansoura, Dec. 24, 2013. The army-backed government said the violence would not derail the January referendum on a new constitution. - REUTERS/Mohamed Abd El Ghany

Government and security agencies in Cairo and the governorates are now at the highest level of readiness in preparation for the upcoming referendum on the new constitution, scheduled to take place Jan. 14-15. The country’s political administration is mobilizing in force, due to the referendum’s characterization as the first step of the road map adopted after the ouster of former President Mohammed Morsi on June 30.

In this regard, the cabinet held a number of coordinating meetings with the Board of Governors and relevant ministries, to discuss preparations to manage the voting process and ensure the security of all voting stations. Monitoring procedures will be adopted to guarantee the transparency of the referendum while ensuring that it be devoid of fraud.

In this regard, Interior Minister Mohamed Ibrahim told Al-Monitor during an interview at the Council of Ministers, “We have put in place security plans to safeguard the constitutional referendum process in all governorates. In Sinai, where many confrontations have taken place with terrorist factions, and the cities of Upper Egypt, [have been given particular attention]. These security operations will take the form of cooperative efforts between the police and army. I also would like to reassure all Egyptians and invite them to strongly partake in the voting, because their participation will negate any attempts aimed at disrupting the referendum. We have plans to confront and counter any terrorist operations undertaken by members of the Muslim Brotherhood to distract and confuse the state on the days of the referendum. We will not allow any trespasses and are fully cognizant of all the plans that these factions have to sabotage the new constitution and stand in the way of implementing the road map.”

Ibrahim also warned, “The Muslim Brothers now want to prevent constituents from voting, while trying to convince them that this constitution falls contrary to Muslim Sharia law and will corrupt the morals of society. They are disseminating forged and inaccurate copies of the new constitution. We will confront all their efforts, however, and the state will succeed in implementing the road map and overcoming the new transitional period.”

In a related development, Egyptian police announced the arrest of seven people who were distributing false copies of the constitution upon which the referendum will be held.

In an interview with Al-Monitor, a security source stated, “We are aware of a number of scenarios by which members of the Muslim Brotherhood might escalate the level of violence on the day of the referendum. These include organizing demonstrations near polling stations, blocking roads to distract security forces from monitoring and securing voting stations, and attempting to prevent voters from reaching those stations.”

The source, who requested anonymity, added that the security directors of all governorates had discussed preparations to foil attempts aimed at disrupting the referendum and filed reports of their findings with the Council of Ministers.

Al-Monitor received a copy of a statement issued by the cabinet on Dec. 18, which read: “The government has overseen preparations by the governorates, the equipping of polling stations in schools and the process of coordinating with the Supreme Electoral Commission, to prepare voter lists and provide dedicated locations for judges, the press and civil organizations to monitor the referendum.”

The statement added: “The Ministry of Youth has been tasked with printing and distributing two million copies of the constitutional text, free of charge, to all governmental departments and agencies, as well as youth centers, universities and the media. [This effort has been launched] following the appearance of counterfeit copies aimed at confusing the populace.”

Press reports have also indicated that the Supreme Electoral Commission received 27 applications from civic organizations to monitor the referendum, but is still examining all the requests received from Egyptian and international organizations. In the meantime, the commission signed a memorandum of understanding with the Arab League allowing it to participate in the monitoring process through a delegation of 100 experts from the Arab League. It also permitted the EU’s participation in the monitoring process.

In an interview with Al-Monitor, an official source at the Ministry of Solidarity said, “The government did not want any civic organizations affiliated with the Muslim Brotherhood to participate in the monitoring of the referendum. The Supreme Electoral Commission tasked with examining monitoring applications was asked to submit its recommendations to suspend and cancel any permits issued to these organizations.”

Furthermore, Prime Minister Hazem el-Biblawi renewed his call for all Egyptians to participate in the referendum. In an educational seminar for a group of Nubian youth on Dec. 22, he said, “The next page of Egyptian history will be its most important. The effects of the events of Jan. 25 and June 30 will become apparent in the middle of next month, when the referendum on the constitution will be held, and Egypt will accomplish what it set out to do thanks to the efforts of its youth.”

A number of political parties, led by the Nour Party, launched advertising campaigns calling on people to vote in favor of the new constitution. Campaigns took on slogans such as “No to the remnants [of the ousted regime] ... No to the Brotherhood,” and “Yes to the constitution ... Yes to stability.”

On a related note, the explosion that shook Mansoura on the morning of Dec. 24 came as a rehearsal for efforts aimed at preventing and sabotaging the current regime’s efforts to implement the country’s road map to the fullest.