Israel’s president extends a hand to Iran, putting the ball in Hezbollah and Tehran's court. 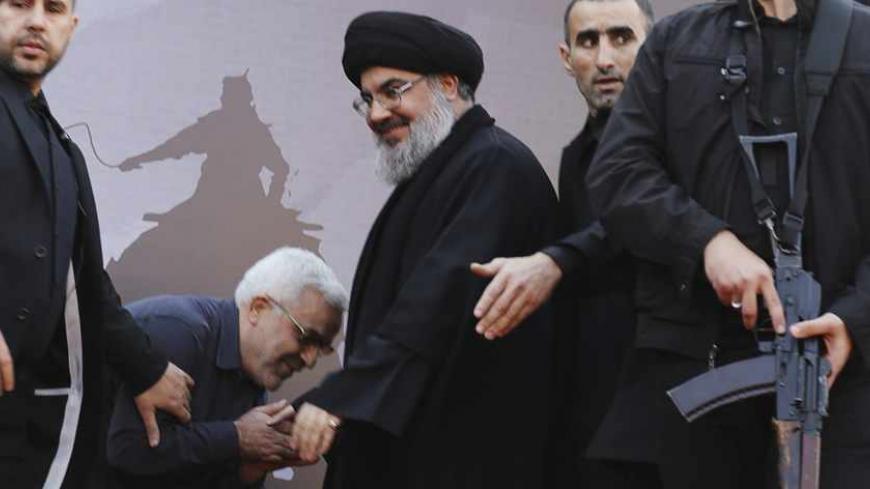 When on Dec. 8 Israeli President Shimon Peres said, “Iran is not an enemy,” it did not go unnoticed. On the one hand, this stance was not surprising for a person who has long sought to portray himself as having a project for Middle East peace based on economic development and cooperation between countries. Peres did not come from the military’s ranks and he won the Nobel Peace Prize for his negotiations with the Palestinians that led to the Oslo agreement. On the other hand, Peres’ move was politically shrewd because it called for an Iranian response.

Peres matched President Hassan Rouhani’s openness with a similar openness, distinguishing himself from Israel's far right wing and Prime Minister Benjamin Netanyahu, who, on Nov. 24, described the US-Iran agreement as, "not a historic agreement, but a historic mistake." Netanyahu attacked Rouhani from the podium at the UN General Assembly and described Rouhani as a wolf in sheep’s clothing.

It is, of course, possible that Peres' words were coordinated with Netanyahu, probably because they both understand that the campaign of skepticism and rejection waged against the US-Iranian agreement by Israel not only risks harming Israel’s strategic relations with the United States, but also portrays Iran as a positive and cooperative partner and Israel as closed-minded and spoiled.

How will Iran’s hard-liners, represented by the Revolutionary Guard Corps, and its moderate wing, represented by Rouhani and Foreign Minister Mohammad Javad Zarif, respond to Peres’ move? Today, the ball may be in Hezbollah’s court, given that the group is the military arm of the Revolutionary Guards along Israel’s borders. Hezbollah, which built its ideology on ​​absolute hostility to Israel, has two bad options.

The first option is to approach the Israeli position positively by remaining quiet. Silence is a sign of approval, as the Arab proverb goes. This choice would draw a barrage of criticism, especially since the party has made its anti-Israel ideology the primary pretext for keeping its arms outside the control of the Lebanese state to the point that the issue has eroded the state and weakened the social contract among the Lebanese people. The second option is for Hezbollah to escalate against Peres, thus exposing Israel’s game. This will strain the US-Iranian dialogue, which has thus far produced an agreement that Hezbollah has called a victory for Iranian diplomacy.

Hezbollah may instead focus even more on the emerging enemy, that is, the extremist and jihadist forces fighting the Syrian regime. This too, however, has its costs. By fighting these groups, which have carried out attacks reaching into the heart of Hezbollah’s stronghold in Beirut's southern suburbs, the war’s flames have licked Saudi Arabia, which Hezbollah has accused of being directly behind the bombing of the Iranian Embassy in Beirut.

This direct, surprising and legally groundless accusation rattled so much as to trigger a response from Lebanese President Michel Suleiman, as Lebanon has no interest in straining its relationship with such a major Arab Sunni power. Bad relations with Saudi Arabia will further harm Lebanese society, which is already stewing in sectarianism. Suleiman is counting on his relationship with the Saudis to deal with Lebanon’s economic challenges, particularly those caused by the massive influx of Syrian refugees, who have so far cost the Lebanese economy $7 billion. About 200,000 Lebanese work in Saudi Arabia, and bad Saudi-Lebanese relations could harm them as well.

The escalation against Saudi Arabia incurs economic and political costs not only for Lebanon, but also for Iranian diplomacy and the efforts of Tehran's foreign minister, who was touring the Gulf states, hoping eventually to break the ice between Iran and Saudi Arabia, when Hezbollah hurled its accusation about the embassy attack.

So the questions are as follows: Did Hezbollah coordinate its new and harsh position toward Saudi Arabia with Zarif’s team or was it independent of Tehran? Was it directed against Zarif? Does Hezbollah’s escalation against a pivotal state in the region at the Arab and Islamic levels serve Iran’s new policy of openness, which has begun to reap dividends by easing economic sanctions and normalizing its relations with the international community?

It is true that Iran has extensive experience in diplomacy, is skilled in managing contradictory internal positions and is deft at using them to further its interests, especially since the most important decisions are made by the supreme leader. It is also true, however, that all the cards in Middle Eastern hands have been exposed. The parties have put everything on the table.

The sanctions on Iran have caused real harm, leaving the supreme leader, Ayatollah Ali Khamenei, to face some tough choices. The ongoing war in Syria, in its sectarian dimensions, has placed prohibitive costs on all the parties involved, and nothing indicates that the war will soon be over. The Chinese philosopher Sun Tzu said, "There is no instance of a country having benefited from prolonged warfare." The costly, eight-year Iran-Iraq War is still fresh in everyone’s minds. All those factors suggest that the policies of defiance and of exporting the revolution are waning, which will force a change in the political discourse.