Did the Israeli prime minister promise the US president that he would go for a peace deal with Palestinians under certain conditions? 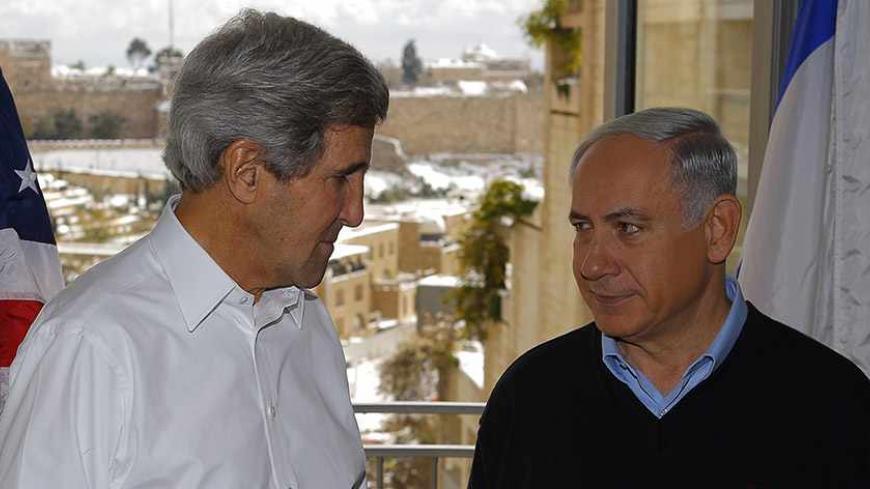 Jerusalem was decked out in white to greet US Secretary of State John Kerry. Not even a year on the job, Kerry arrived in Jerusalem Dec. 12 for the ninth time as secretary of state to see the heaviest snowstorm the Israeli capital has had in decades. More than 10 cm (9 inches) of snow buried the most divided city in the world. Hundreds of drivers and citizens were stranded. The city itself was cut off from the rest of the country and the roads leading to Jerusalem were closed. Police warned against travel to the city, which was under total lockdown.

This is not the first siege Jerusalem has experienced. This sensitive city has known more sieges than most cities in the world. It doesn’t scare easily, although most sieges over the centuries ended very badly. The invader, be he Babylonian or Roman, destroys the city, burns it to the ground and kills the stubborn subjects.

This time, Prime Minister Benjamin Netanyahu is the one under siege in Jerusalem — by Kerry, in the name of the United States, which represents the world. But unlike past eras, the invaders this time are weaker than the besieged. They have fewer means. They cannot set the city on fire, although they can try to impose economic sanctions on its residents. It’s hard to know who will emerge victorious.

The Americans are serious. As I wrote here last time, Kerry is determined to bring Israelis and Palestinians to face the dramatic decisions which will force them to grow up, to compose themselves and to adopt a historic decision. The Americans are talking about a marathon diplomatic negotiating summit, at which all sides will convene and talk until white smoke appears. But the problem with the Americans is that they are unaware that instead of white smoke they might get black smoke, along with fire and blood. That’s what happens when Israelis and Palestinians are shut together in one place (see Camp David in 2000). But Kerry keeps trying.

The American effort is based on a series of conversations and promises made by leaders on both sides. Palestinian Chairman Mahmoud Abbas (Abu Mazen), for his part, promised that he could sign off on an end to the conflict, that he has the will as well as ability to scribble a signature onto an agreement ending this affair. All he needs is a Palestinian state on the same area as before June 1967, a symbolic resolution of the right of return and a solution in Jerusalem that will divide the city between the Arabs and the Jews. He is willing to accept a demilitarized Palestine, devoid of an army, and he is willing to make concessions to Israel regarding security arrangements.

Netanyahu, too, made dramatic promises. I think it hasn’t been made public before: Bibi told President Barack Obama, according to reliable US and Israeli sources, “If I get the security arrangements I need, if it’s clear that there will be no Palestinian right of return to Israel and if Israel is recognized as a Jewish state, I would be ready to sign an agreement based on the 1967 borders, with an exchange of land that will leave most settlers were they are.”

If Netanyahu said this to Obama, it’s a drama of historic proportions. But — and now come the many caveats — Netanyahu has a record of determined remarks and promises that turn out to be devoid of content of any kind, dead letters in the yellowing pages of history.

Netanyahu will publicly deny such a promise. He hides it from his party, from his public, from the nationalistic, messianic cult that surrounds him wherever he goes. He would rather the world, his party, his home not know how far he is willing to go for peace.

The Americans have opted for a modular solution. First of all, they said to themselves, they will resolve the security problem for Netanyahu. Every conversation with Bibi starts out with Israel’s security needs. Every expression of willingness on Bibi’s part to make a gesture of any kind starts out with a long, scholarly (and justified) speech about the need to defend the citizens of Israel. So the Americans believe they have solved the needs of the Israelis. The security model presented to the Israelis last week is supposed to provide Israel with all the defense it needs. That, at least, is what the Americans think.

The problem is that the US model, which is made up of (Israeli) questions and (American) answers, is far from satisfactory to Israeli Defense Minister Moshe Ya’alon. His people explain that no electronic balloon floating over the Jordan Valley, a “magnetic field,” or sophisticated sensors and advanced robots, will be able to carry out the dirty work that the Israeli Defense Forces and Shin Bet do almost every night in the territories: detaining wanted Palestinians and terrorists planning attacks on Israel and mowing down every burgeoning Hamas grouping on the ground to enable Abbas to feel that he is sovereign in the areas of the Palestinian Authority. There’s no alternative to these measures, says Ya’alon.

The question is whether Netanyahu will let Ya’alon, who has cast his eye on the post-Netanyahu leadership, have the upper hand in this argument, or whether he will recognize the crucial moment and force him to bow his head and allow the negotiations to proceed. Anyone who knows Netanyahu knows that he will go for a third option: He will hesitate, deliberate, anguish, vacillate between his desire to “make history,” to appease the United States and break through the deadlock, and his basic instinct, which aspires to maintain the status quo at all cost, to disbelieve the Arabs, the Americans or the Europeans, and to keep being the recalcitrant, suspicious and conservative Bibi we know.

Kerry will need every drop of talent, aggressiveness, creativity and luck, too, not to crash with his dreams into the white-covered walls of the besieged city of Jerusalem. And we haven’t even dealt with the other side, the Palestinians, who are even less able to supply Kerry with the goods than the Israelis.