Journalists are increasingly being targeted by attacks and killings in Iraq, while the government stands by in silence. 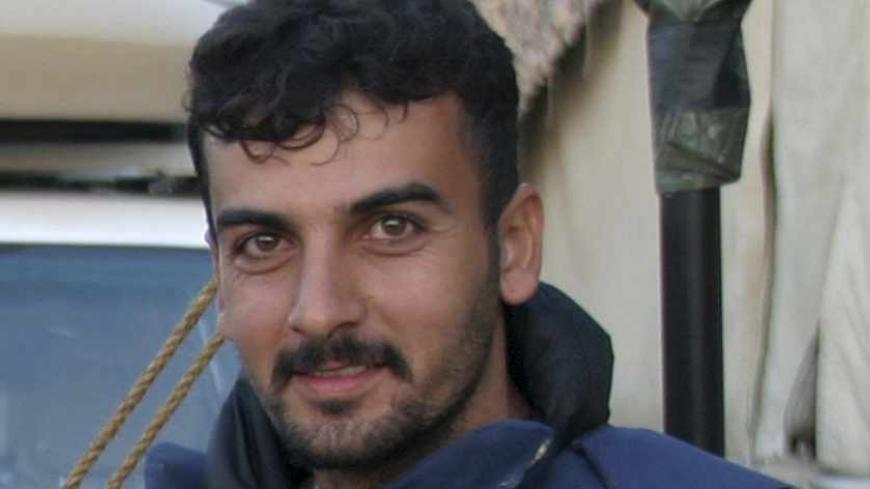 An al-Qaeda-linked group in Syria executed Yasser Faisal al-Jumaili, an Iraqi freelance cameraman, Dec. 5, 2013. Jumaili, 32, was from the Iraqi city of Fallujah and had three children. - REUTERS/Mohanned Faisal

On Dec. 8, the body of Yasser Faisal al-Jumaili, an Iraqi photojournalist who was executed by al-Qaeda in Syria, arrived in Fallujah. Only one day before the arrival of the body, dozens of journalists in Sulaimaniyah staged a sit-in to protest against the assassination of journalist Kawa Ahmed Germyani in Kalar at the hands of gunmen.

Speaking to Al-Monitor, Ziad al-Ajaili, the head of the Journalistic Freedoms Observatory in Iraq, said: “No blood money is paid to the families of murdered journalists, who are killed on a daily basis. In Mosul alone, 50 journalists have been killed since 2003.” According to Ajaili, most journalists fled the city after a hit list containing their names was recently published.

According to international statistics, working as a journalist in Iraq is considered to be one of the most dangerous professions in the world. This is true not only because of the persistent threats they receive, but because the Iraqi authorities are unable to protect them in the first place and fail to reveal the identity of those responsible for these killings.

On May 3, on the occasion of World Press Day, the International Committee to Protect Journalists classified Iraq as the worst country in terms of detecting the identity of the journalists' killers, stating that the Iraqi authorities are not doing their job to save journalists.

Ajaili, who had called upon the Iraqi government a few days ago to repatriate Jumaili's remains, said that the Turkish government waited an entire day before allowing the journalist’s remains to enter through the Bab al-Hawa crossing in Idlib, Syria, into Turkish territory.

Ajaili added that journalists in Iraq, with the help of some Arab and Turkish reporters, made contacts to pressure the Turkish government to allow the remains to pass through the border. He also said that two days after Jumaili's death, the Iraqi government said it would cover all the expenses resulting from transferring the journalist’s remains. Ajaili described this as a good move, even if it came late.

Moreover, Jumaili said that unlike the phenomenon of kidnapping Iraqi and foreign journalists who were held for ransom — which became very common after 2003 in Iraq — killing journalists has become widespread, with revenge operations targeting journalists all over the country.

“What is happening to journalists in the country, especially in the province of Ninevah, comes within the context of a scheme that has been revealed over a year ago, when a hit list including the names of 44 journalists was issued by armed groups,” he said

“It is unfortunate that the Iraqi authorities did not take any steps to protect them. They did not even try to warn them about this plan. What’s more, some of the assassination operations take place under the eyes of the security forces,” Jumaili added.

Ajaili said, “According to our information, the reason behind these operations targeting journalists is that some politicians seek to cover up the crimes of corruption, while armed groups want to eliminate all reporters in Mosul.”

He also said: “Forty journalists have left [Mosul] for fear of reprisal. Most of them settled in Turkey and the Kurdistan Region [of Iraq].”

It is worth noting that these tragic acts against journalists are not taking place in troubled areas alone. Germyani was shot dead by gunmen on Dec. 6 in the town of Kalar, located in the province of Sulaimaniyah in Iraqi Kurdistan.

Reporters Without Borders considered this attack to be a shock and warned against the assassinations of journalists in Iraq.

Organizations that are concerned with the rights of Iraqi journalists have reported attacks and unlawful arrests against journalists during their duties on a daily basis. Meanwhile, other reporters complain about pressure and continuous threats from political parties, the authorities and militias, and find themselves unprotected.

In a comment on Facebook, Uday Hatem, chairman of the Press Freedom Advocacy Association in Iraq, criticized the authorities both in Baghdad and Iraqi Kurdistan.

“The silence of the executive and legislative powers amid an increased number of assassinations targeting journalists is a matter that needs to be highlighted, especially since silence on such an important matter is seen as collaboration in the crime,” he said.