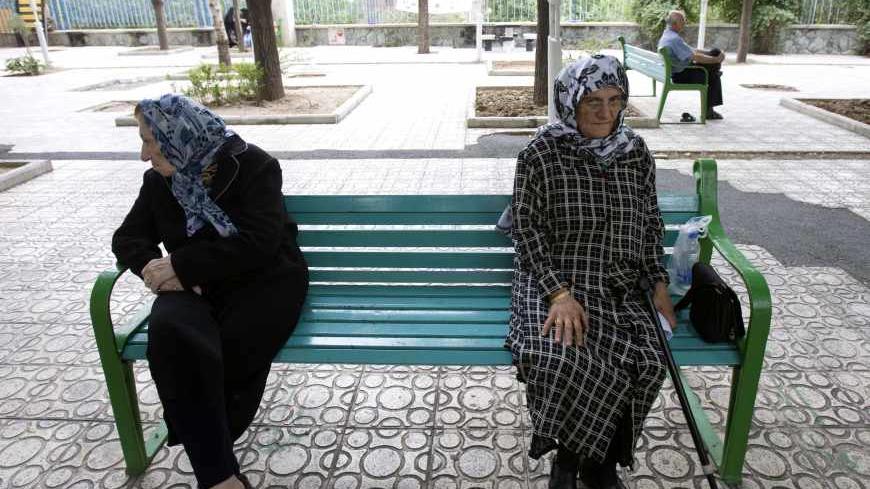 An elderly woman sits with another older woman on a park bench in Tehran, June 9, 2009. - REUTERS/Raheb Homavandi

Being elderly in Iran is by no means simple; the society suffers from a shortage of means to accommodate senior citizens. Those who are wealthy, or even moderately well-off, are not forced to face many of the obstacles the poor and middle class must.

In the past decade — particularly over the last five years — senior citizens have been benefiting from some public transportation and limited recreational discounts, but the grave issue is that a lot of what Iranian senior citizens lack either does not exist at all in the country, or is offered at a high price, regardless of age.

For decades, the favorite hangouts for the elderly — and particularly for elderly men — were their local parks. They would walk to and from the park, and many would spend hours there during reasonable weather conditions. Nowadays, the number of parks and green spaces — as they are called in Iran — is limited due to massive construction projects (commercial and residential), especially in big cities. On the other hand, ever-increasing pollution in big cities results in hazardous conditions for most seniors. Alerts are issued frequently, particularly in the colder seasons, recommending that older people stay indoors.

Mohammad, a 68-year-old resident of Tehran, tells Al-Monitor that both highly polluted air and large crowds discourage him from frequenting the park as much as he used to. He talks about another incentive of hanging out at the park, which was playing chess with his friends. He says the chess table was pretty damaged and old, and in lieu of repair or replacement, it was simply removed.

Government-retired seniors generally face financial challenges. Although their pensions have been boosted to help them cope with colossal inflation, it is still far from being enough of an increase.

Official statistics issued by the Iranian government demonstrate changes in the price of most basic food items almost every month. This causes many critics to draw the conclusion that pensions and the customary new year’s bonuses given to retired citizens are far from enough.

Many older Iranians whose children live abroad long to see their sons and daughters and grandchildren, but are forced to veto the idea. The low value of the rial, long flights and layovers — specially for people headed to the United States or Canada — and the difficulty of obtaining a visitor’s visa are among the elements which make it extremely tough to travel.

Touraj, a 78-year-old retired engineer who lives in Yazd, tells Al-Monitor that he and his wife were forced to forfeit their US green cards after having yearned for them so badly for so long. To maintain a green card as a nonresident, green card holders must travel to the United States every six months. Touraj, whose three children all live in the United States, says, “We simply could not afford to travel to the United States twice every year. We struggled for a few years and then just had to give up. We miss our kids and grandkids terribly, but we had no choice.”

Saeed Mortazavi, the infamous former judge who was appointed head of the Social Welfare Society during Mahmoud Ahmadinejad’s presidency, proposed a 25% increase in pensions for retired federal employees.

This increase would still not beat inflation, which has been officially reported at 31% this year. The amount that was eventually added to the retired employees’ pensions, however, was only 18%.

Some Iranian authorities have time and again said that despite the recent implementation of an insurance plan called “The Golden Insurance Plan” (Bimeh-ye-Talaee) for some senior citizens, many elderly live without the health insurance benefits their peers enjoy in developed countries.

In a recent interview with ILNA, Mohammad Salimi, a spokesman for the Retirees Union of Iran’s Social Welfare Society, said, “Retired employees of the government have not paid 30 years of monthly dues only to fall behind on their day-to-day expenses in old age. The amount of annual increase in pensions is simply not compatible with the upward slope of prices.”

Badri, a 77-year-old retired teacher who resides in Tabriz, tells Al-Monitor that the Golden Insurance Plan provides good coverage for hospital stays, but regular doctor’s visits — which obviously occur much more often than hospital stays —are generally either not covered, or covered only partially.

Most Iranians honor the tradition of paying respect to their elders by visiting them, particularly on special occasions. For the Persian new year, elders give gifts to younger people, especially their children and grandchildren. A shortage of money and the last-minute payment of new year bonuses by the government create grave obstacles for braving traffic, crowds and pollution to buy goods and gifts in time for the arrival of the new year.

Many Iranian seniors do not receive the respect they deserve after a lifetime of paying their dues. This “disrespect” demonstrates itself in monetary means and many other concrete aspects of life. Insufficient public transportation, roadblocks including a lack of wheelchair ramps, polluted air in big cities and the recent sky-high cost of medication are just a few of them.

Maryam, a 55-year-old homemaker from Mashhad whose parents are elderly and retired, tells Al-Monitor it breaks her heart to see her parents struggling to survive. She says, “My father worked for this country, spent the best 35 years of his life working for the government. My parents loved to entertain and have relatives and friends over. But over the past several years, with their deteriorating health and medical expenses, hosting has become a nightmare for them. It’s really sad to see them so weak and fragile, but to watch as they suffer in a way they never did is truly tragic.”