Disabled veterans in Iran believe that not enough is being done for them, especially those suffering from chemical injuries from the Iran-Iraq war. 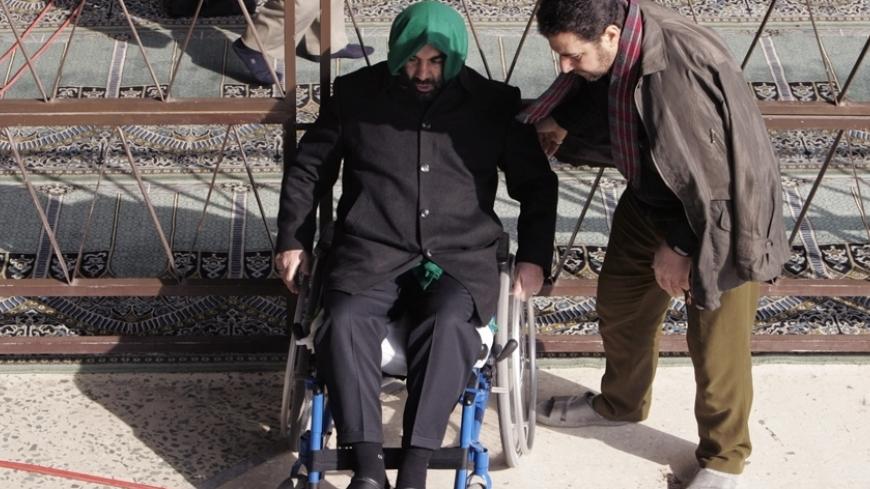 A man helps a veteran of the war between Iraq and Iran during Friday prayers in Tehran, Jan. 5, 2007. - REUTERS/Raheb Homavandi

The complaints of disabled Iranian veterans and their families are generally related to the activities of daily life. These simple rituals can become extremely complicated without accommodations for their disabilities. Mobility and access to medication and mental health care have become major challenges for many disabled veterans.

Mohammad Esfandiari, director of communications and public relations of Iran’s Martyrs and Disabled Veterans’ Organization, announced the latest numbers of surviving veterans in June 2014: 548,499 disabled veterans of the Iran-Iraq war are currently living in Iran. This number includes the victims of Iraq’s chemical weapon attacks on Iran.

According to official statistics, the number of mentally disabled veterans and those who suffer from PTSD is increasing. Some of them are increasingly showing signs of mental issues, and others' mental health conditions have worsened with age.

Accommodations such as wheelchair-accessible ramps, elevators and parking spots are rare even in Tehran, and much more so in the smaller cities. According to information issued by the Tehran Metro Group, currently a total of 128 elevators exist within Tehran’s subway system, much fewer than needed. Over 5,000 disabled Iranian veterans, a large number of whom live in Tehran, are wheelchair-bound. The Iranian government has announced that 14 billion toman (around $5 million) has been dedicated to constructing ramps and wheelchair-accessible paths throughout Tehran, and that a major incentive of this plan has been to better serve disabled veterans. There are no official plans for similar facilities in any other city in Iran.

Formalities such as ceremonies to present veterans with awards and thank them for their service are plentiful and widely covered in the Iranian media, particularly in time for two annual national events: Disabled Veterans’ Day in May and Sacred Defense Week (Sept. 20-27), which commemorates the commencement of the Iran-Iraq war.

Many disabled veterans, especially victims of chemical attacks, however, complain of too much talk, too little action by the authorities.

The major issue that veterans with chemical injuries face is the high rate of pollution in Tehran. The paradox is that they need to live in the capital because access to medical care is severely limited elsewhere. The city’s pollution, however, is “gradually suffocating us,” one veteran asking to remain anonymous tells Al-Monitor. In early 2014, the 4,000 chemically injured veterans living in Tehran were officially warned to remain indoors.

The Foundation for Martyrs and Veterans Affairs is a major shareholder of Sasan Hospital in Tehran, where most chemically injured veterans receive treatment. Majid, 50, a chemically injured veteran who has severe breathing problems due to the irreparable and extensive damage to his lungs, needs around-the-clock care and periodical hospitalization. In an interview with Al-Monitor, he says, "It’s my worst nightmare. Even when I am in serious need of being admitted, I keep putting it off until I absolutely have to go, or until my wife drags me to the hospital. In the hospital, I feel more like a prisoner than a patient. It’s difficult to get admitted into Sasan Hospital, where I need to be admitted once in a while. Although I am a regular patient there, I still have to wait my turn each time to get admitted. I think they probably have at least a few vacant beds most of the time, but they still make you wait. I don’t know why.”

Sara, Majid’s pharmacist wife and primary caregiver, tells Al-Monitor, “We are not treated with respect at all. There is a lot of talk when it comes to the issues of my husband and his peers, but very little is practical. I cannot trust the hospital staff, especially the nurses, so I insist on staying with Majid throughout each hospital stay, but I must pay around 20,000 toman a day in bribes. It’s so tough to live in this situation. We have a teenager. The amount of financial help we receive from the administration is little compared to Majid’s medical needs, and I have to take off work occasionally to play caretaker, so I lose a lot of pay. The financial strain I undergo is so extensive that I honestly hardly have space in my mind to think or worry about the other aspects of our problems.”

Over 25 years ago, the Iranian administration started reserving a number of seats in public universities for veterans, thus making the already highly competitive admissions even tougher for the general public.

This measure sparked a lot of criticism and led many to accuse the government of discrimination. While the move enabled some disabled veterans to pursue higher education, their substantial problems, such as scarce job opportunities and mobility restrictions, remain. Iranian society is generally ill-equipped to accommodate disabled citizens, thus strictly limiting their work potential. Critics believe the high cost of facilitating higher education for disabled veterans has not been of much use to the country or the individuals.

Iran’s disabled veterans face daily financial hardships and at times suffer limited access to medication. Although there are some programs intended to enable these veterans to work for the government, there are still not half as many solutions as there are problems.Yet, perhaps the most hurtful aspect of their disrupted lives is the criticism and scrutiny they suffered and still face in society, mainly over their nominally higher education benefits.

Ebrahim, a 56-year-old disabled veteran who lost two limbs in the war, attended a state university with the help of his military record. Although he graduated with a master’s degree in sociology, he is physically unable to work. In an interview with Al-Monitor, he says, “I regret continuing my education. Maybe learning certain skills would have been more beneficial to me and my family. Some people are still mad at us veterans and at the administration for making it harder for them to get into school. In reality, support for our day-to-day life would have been so much better than a degree with which I’m unable to even earn a living.”