Gaza artists show just how innovative they can be in their work as they find unique ways to depict the Gaza Strip residents' plight. 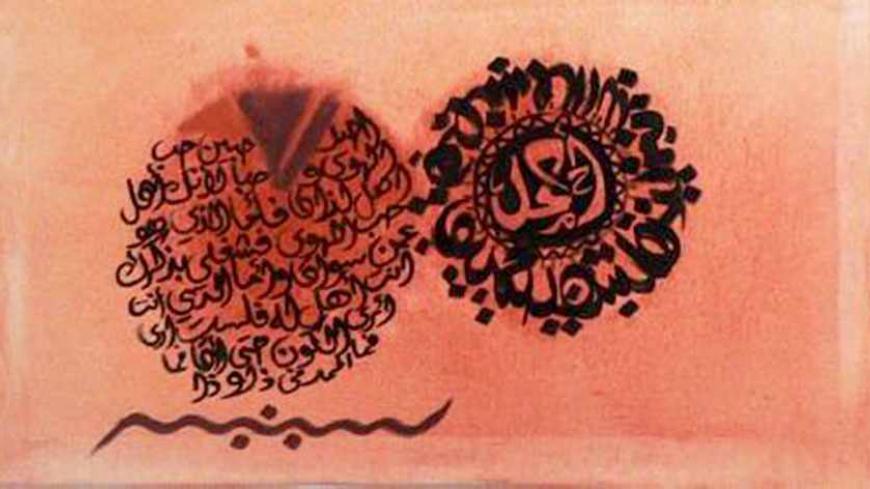 Mohammad al-Hawajiri, a Gaza artist, mixes spices and food materials to paint when faced with the lack of materials resulting from the blockade. This painting is part of a series called "Spirits and Perfumes," 2007. - www.eltiqa.com

Mohammad al-Hawajiri, an artist from the Eltiqa collective for contemporary art said, “Starting in 2007, we witnessed a gradual shortage of art supplies. Their scarcity increased during these last months of the blockade, and we have begun using colors that are not suited for painting and are not intended for artistic purposes. As a result, paintings are losing their quality, and the weather is affecting their lifespan.”

He told Al-Monitor that this was the reason why artists resorted to other forms of contemporary art such as video and installation art.

Hawajiri recalled that he used spices on one of his paintings he exhibited, which he called Rouh wa Rawa’ih (Spirit and Aromas). The painting garnered a lot of attention because it reflected the artist’s desire to escape the siege and many elements of Middle Eastern culture. It also went beyond the three traditional visual dimensions to incorporate a fourth dimension of smell, as he put it.

From spices to red carpets, Hawajiri’s latest work depicted the current conditions in the Gaza Strip. Instead of using colors or brushes, he placed pieces of red carpet in front of everything that has become precious in Gaza. These included butane gas tanks, the sea — where an open door leading to its shores awaits the arrival of foreign activists — and a depiction of one of the few still operational smuggling tunnels.

“I dealt with the blockade in a comic manner and used a bare minimum of artistic tools. The idea was to exploit the red carpet that is used to welcome leaders. We have no leaders, and there are much more important things to us than these sorts of protocol such as electricity, foreign aid reaching us by sea or goods arriving via the tunnels. These, to the citizens, are much more worthy of a red carpet welcome,” Hawajiri explained of his work.

From Hawajiri’s use of black comedy in his work, we move to artist Bassel al-Maqwassi’s use of environmental waste. Maqwassi, whom Al-Monitor met at the Shababik art studio, explained that through the exploitation of waste products such as wood, iron and newspapers, artists could complete their works without expending all their effort searching for the proper mediums. “Even if proper paints and brushes were available, they would be prohibitively expensive,” he explained.

The works shown at Shababik studio’s latest exhibition are devoid of extravagances and commensurate with the environmentally friendly style of modernist art that uses old clothes, compositions built around the remnants of dolls, pieces of string, wood planks, cloth fabric and metal meshes. The works employ anything that the artist can use to depict himself, his frustration and hopes. There have even been works that made use of bread and ginger in their composition.

Maqwassi pointed to the canvases and said, “The message behind this exhibit is that the days pass, artistic perspectives evolve, yet the siege continues unaffected. The extent of the blockade and the existing monopolies have driven up the price of one tube of paint from $4 to $14.” He also noted that his latest art project entailed introducing Arab calligraphy to his old paintings via computer design programs.

The turmoil has left artists with few venues by which to paint and express themselves. Artist Sherif Serhan, for instance, is always on the lookout for alternatives. “We cannot find all the tools and paints that we need. For instance, white and black paints are nowhere to be found in the market because of their high demand. We also cannot find the proper brushes. For one recent painting, I needed a leather brush, and when that proved impossible to locate, I used a pastry cream brush instead,” he said.

He explained to Al-Monitor that they faced the same predicament when it came to frames, which pushed artists to resort to carpenters for their manufacture. Canvases, on the other hand — which are made of a special kind of cloth — are rare to find in Gaza’s markets, and when found, they are of the wrong dimensions. As a result, many artists have begun using cardboard instead.

Serhan opined that the blockade has other repercussions on artists such as being compelled to seek funding from various bodies and institutions. This in turn obligated them to paint predetermined subject matters “such as rejecting violence against women and violations of human rights.”

“These types of projects affect the artist’s creative impulses, which are supposed to emanate from deep inside without instructions from outside sources. Artistic projects must be independent and free, except in cases when the sponsored project actually aligns itself with the artist’s creativity and desires,” he elaborated.

Artist Majed Shala, interviewed by Al-Monitor in his studio at Shababik, did not stand next to a canvas and color palette, but sat in front of a computer monitor drawing with the help of design software. “Design software has allowed me to redraw my old paintings, infusing them with a new and different artistic vision. The result is a new painting imbued with computer-generated colors. Sometimes, I incorporate more than one painting in a single project without using any of the original colors or shades,” he stated.

Shala also believes that another impact of the blockade revolved around border crossings and the artists’ inability to travel abroad to participate in workshops and developmental training courses. “I have stopped looking at the invitations that are sent to me, because I know that I will not be able to leave the Gaza Strip,” he added.

He explained that when they want to exhibit their works abroad, they cannot ship them to the intended destinations. When they manage to do so, they face great difficulties in getting them back. “We have finally found a solution to this problem by which the works are shown via projectors, as was the case in Cairo recently,” he explained.

Shala pointed out that in the past people expressed interest in art. As of late, however, their main concerns revolve around how to obtain replacement butane gas tanks, restoring electricity and how to pocket a bigger paycheck. “I do not blame people for having different priorities now, in light of the substantial increase in prices that has affected everything from sugar to paint brushes,” he added.