The Israeli leadership risks boycotts beyond West Bank products with its failure to fully appreciate the extent to which the EU distrusts Israel's stated desire for a peace settlement. 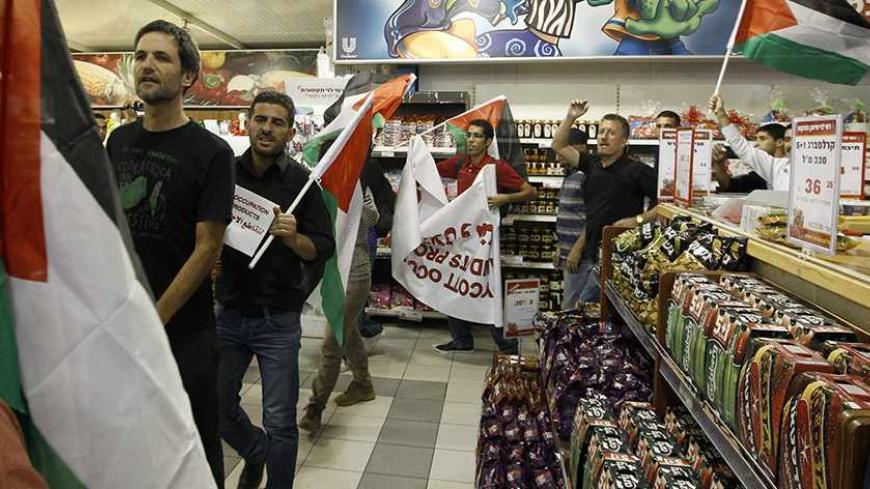 Earlier this week, a senior Israeli politician returned from a visit to Germany disturbed by what he had encountered there. What concerned him was the extent of the aversion that his hosts displayed whenever the topic of the settlements came up. The man, whose resume includes quite a few visits to European capitals over the past few years, was amazed to discover that unlike on his previous visits, the people he met with, including parliamentarians and senior foreign ministry officials, had zero tolerance for anything to do with the settlements. “I felt like they no longer paid attention at all, when we talked about the settlements. Until recently we still had someone to talk to. They tried to understand our side, and they were very tolerant, but this time I felt like they were trying to tell me, ‘We’re fed up with you. We’ve lost our patience. We don’t believe that you want a diplomatic process.’ And that was the Germans, who are considered to be our closest friends in Europe.”

This description explains statements by sources in the European Union, published Tuesday, Dec. 3, asserting that half the EU member states support labeling products manufactured in the settlements. They want to do this as a result of the sorry state of the negotiations with the Palestinians and on the eve of yet another visit to the region by US Secretary of State John Kerry.

The senior politician says that he was not surprised at all [by the report]: “This was the Europeans’ way of telling us, ‘You’ll understand it the hard way when we hurt you economically and when we stop funding all sorts of projects in the settlements.’ It will end with a boycott imposed on the entire land of Israel. But people here don’t fully understand the depth of the trouble we’re in. Here [Minister of Housing and Construction] Uri Ariel is not afraid to approve building programs in the settlements right in the middle of the diplomatic negotiations, to cause Prime Minister Benjamin Netanyahu problems on the diplomatic front, and yet still keep his job. What the Europeans take away from that is that Bibi isn’t serious and that nothing will come out of these negotiations. That is why they are trying to apply pressure.”

And so, even though the diplomatic and local significance of these reports are disconcerting, in Israel they were received with something bordering on apathy, if not disdain, as evidenced by comments made by Gilad Erda, minister of home front defense and a member of the diplomatic-security Cabinet. In a morning interview with Army Radio (Galei Tzahal) on Tuesday, Dec. 4, Erdan attacked the European Union: “It is very sad that these are the positions coming out of the EU. It shows their lack of understanding regarding what is happening in the Middle East. Marking these products will only encourage the Palestinians to toughen their positions even more during the negotiations.”

The arrogance of this Likud minister's response is further evidence of the diplomatic shortsightedness and the obliviousness of the Israeli leadership to what is actually happening in Europe. In other words, what is sad about this story is not the failure by the European Union to understand what is happening in the Middle East, but the failure of the minister — as noted, a member of the diplomatic-security cabinet — to understand what is happening in Europe.

The cold shoulder that Europe is giving Israel is an unmistakable example of how Jerusalem is losing its friends. Anyone looking for signs of a third intifada might find themselves in the exact same position. This is not an armed Intifada. It is a diplomatic war against Israel in the international arena. The fact that states of the European Union support a boycott of Israel did not occur in a vacuum. It was the direct result of enormous diplomatic pressures applied by the Palestinians.

Ostensibly, now that the negotiations between Israel and the Palestinians have been renewed, it would have perhaps been reasonable to assume that the Europeans and the Americans would have ignored the settlement constructions in Judea and Samaria [West Bank], just as they did when Ehud Barak, Ariel Sharon, and Ehud Olmert were prime ministers. Significant diplomatic negotiations took place during their tenures, if not more active political measures, such as Sharon's disengagement from Gaza in 2005. The difference is that back then, the Israeli leadership viewed the settlements as something that should be resolved as part of a peace agreement. In contrast, Netanyahu ignores the issue entirely. Ideologically, it doesn’t look like he has changed over the past few years, and politically he is being held captive by the right — that is, by the settlers that registered en masse for the Likud and changed the very face of the movement.

The ideological trap that Netanyahu is caught in, within the Likud and in his coalition, has led him to prefer the release of terrorists over any declaration of a freeze on construction in the settlements as a goodwill gesture in advance of the negotiations with the Palestinians.

The one person to address this issue and use it to hold a mirror up to the Israeli public, especially Netanyahu’s political partners at the center of the political spectrum, has been Yuval Diskin, a former chief of Shin Bet.

At a conference in Tel Aviv on Wednesday, Nov. 27, to mark the 10th anniversary of the Geneva Initiative, Diskin called Netanyahu weak. He was especially critical of the prisoner release agreement, which he described as a “cynical and revolting deal, intended to prevent a freeze on construction in the settlements.” Nor did Diskin spare criticism of Netanyahu’s excessive focus on an Iranian bomb, stating, “The implications of the conflict with the Palestinians are far more existential than the Iranian nuclear threat.”

In his talk, Diskin called for changing the composition of the coalition so that it could advance significant diplomatic moves to resolve the Arab-Israeli conflict. The key to the problem is evident in Diskin’s remarks: The current coalition is unable to advance a diplomatic process or other moves toward peace. At best, all that it can do is what it has been doing for the past few months — keep limping along with the current negotiations, which aren’t going anywhere.

As long as Netanyahu is shackled to the settlers politically, he has no intention of making any progress with the Palestinians. Under these circumstances, Finance Minister Yair Lapid and Justice Minister Tzipi Livni bear enormous responsibility as representatives of the center-left camp in the coalition. By sitting in a government that has no intention of making the transition to action in diplomatic negotiations, they are betraying the mandate they received from their voters.

Livni cannot keep making the rounds forever, running between the negotiating room and TV studios without the slightest expression on her face and without providing explanations to the public that voted for her precisely because she raised the banner of diplomacy in her campaign. She should apply strong political force and bring Lapid along with her to make Netanyahu realize that she will not sit in his government just to whitewash the settlements. This is the last chance to get Netanyahu to do something. After all, even if he hasn’t undergone some ideological transformation, he still wants to keep his seat as prime minister.