14 Egyptian women will rejoin student protests after release from jail

In an exclusive interview with Al-Monitor following their release, young women from the Saba al-Sobh Movement who were arrested during a protest in Alexandria say they will continue to oppose military rule. 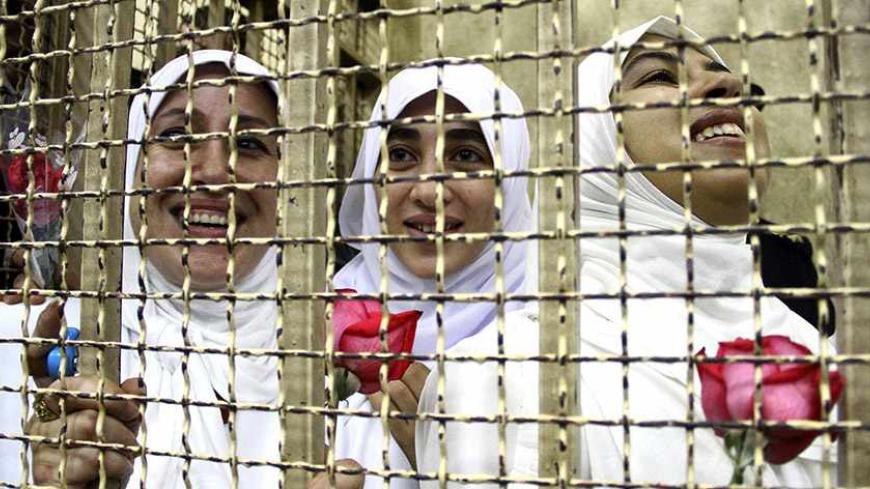 Women who were found guilty of obstructing traffic during a pro-Islamist protest in October smile during their appeal hearing in Alexandria, Dec. 7, 2013. - REUTERS/Stringer

ALEXANDRIA, Egypt — "Prison has never been able to change someone's ideas … We will continue our march through joining the student protest movements in universities," confirmed the girls of the Egyptian Saba al-Sobh Movement, which supports deposed President Mohammed Morsi, to Al-Monitor following their recent release from prison. Fourteen girls from the movement had been sentenced to 11 years in prison, while seven minors were placed indefinitely in a youth detention center. The girls said that they would finish their journey via protests organized by the student movement in opposition to the ongoing oppression under military rule.

Sarah Abdel Qadir, a student in the College of Fine Arts at Alexandria University, said, "It was truly a bitter experience. However, I became more determined after I experienced the same bitterness felt by those who had been to that place before me, those who will go after me and those currently imprisoned or detained. I felt for Dr. Mohammed Morsi, who has been in prison for six months now. I wanted to get out only so that I could finish what we started. Our issue is not about President Morsi's return. He is only a symbol for us. Rather, [our issue is about] those who were killed during the breakup of the Rabia al-Adawiya and Nahda sit-ins and refusing military rule."

"I will not participate in the upcoming [constitutional] referendum or in elections. I do not recognize this constitution that they speak of, nor do I recognize the road map. In prison, there was a TV without sound that allowed us to follow the news. We had to rely on the picture alone to determine what was happening. We learned things about us we didn't know, and heard lies and rumors that went so far as to describe us as terrorists. We also learned about the protest law via the TV, and we disagree with all of it," Abdel Qadir added.

Next, Al-Monitor met with Mona Maher at the suggestion of students in the College of Science at Alexandria University. Maher, a slender girl, was sitting on the sidewalk surrounded by a large group of girls. She was engrossed with eating a piece of pizza. When Al-Monitor's correspondent approached her at the agreed-upon time, she said, "I apologize, but I've missed eating pizza after 38 days of eating koshary and lentils in prison." Maher said she had never been affiliated with the Muslim Brotherhood, and that she was not a member of the Saba al-Sobh Movement. She had only learned that the movement was holding a demonstration that night before it took place via Facebook.

"Intellectually, I sympathized with the movement and their demands. I was on my way to university and came to one of the gathering sites near the Victorian District in Alexandria. Some of the residents were confronting us. A woman threw a vase at us and it landed on a girl's head. Next, the police were chasing everyone and we all began to run. We were being followed by soldiers and police, and a second later, I realized that a policeman had extended his rifle and pointed it at my head. I told him: 'Calm down, I'll go.' They treated us with brutality while gathering us in the police car, in a very insulting way. They would beat us on our backs until we fell to the ground. Then we'd try to cover our heads and they'd beat us again. We'd fall to the ground, and they would kick us. I learned that some of my colleagues had been treated like captives. They were made to get down on their knees and place their hands behind their back. At the police station we were treated like criminals. They opened a file for us to see if we had been previously accused and carried out interrogations," Maher added.

Regarding the claims that they had carried out acts of vandalism during the demonstration — and even that they had admitted to this — Maher confirmed that the march was very peaceful. "It was a youth march, and there is no truth to these accusations." Maher then pointed to her slender body and said, "I was accused of demolishing property."

Maher stressed that she would not give up over fears of repeating her experience in prison, saying, "So Egypt can have a better future, I will maintain my position. I have no doubt that my colleagues from the student movement and I are doing the right thing."

Regarding the possibility of her participating in the upcoming referendum, she said sarcastically, "Of course you can't expect someone they wanted to imprison for 11 years to agree with what they are doing regarding the road map."

Al-Monitor met with Samia Ragab after she attended a party held by "students against the coup" in the College of Science at Alexandria University.

"I spent 38 days [in prison], patient, steadfast and convinced of our Lord's mercy. I am still accused and convicted, a 'terrorist' sentenced to a suspended sentence of a year in prison. This is despite the fact that all of the witnesses who appeared before the court confirmed that my colleagues and I didn't commit any acts of sabotage or vandalism. After all of this, they expect me to be sacred. I will not. I'll go out to express that the word 'rights' should be said at any time."

In a simple home in Alexandria's Sidi Bosher district, Al-Monitor met with Mohammed Anas, a schoolteacher and the father of Yumna Anas, one of the young girls charged in the same case and placed in a youth detention center. Anas said that he, like others affiliated with the Muslim Brotherhood, had been tricked in the name of democracy. They had rejoiced in democracy following the January 25 Revolution, a concept that had been considered blasphemous according to the principles of al-Gamaa al-Islamiyya in the 1980s. However, since the 1990s, Islamists began to reassess their views. Anas, like others, was surprised to find that in the view of a certain faction, democracy had only been sought for the sake of power and making gains.

"'Dad, I'm sorry that I didn't get your permission before going out to participate in the demonstration.' This is what my 15-year-old daughter, who cannot sleep without her doll, said to me when I visited her in the youth detention center, where she was kept with homeless children and criminals," Anas said.

Al-Monitor then spoke with Yumna about her experience in the center. She began, "I knocked on the bathroom door and no one responded, but when I opened it I was shocked to see one of the young girls on the ground covered in blood, after having slit her wrists. How much can one withstand this?" Yumna recalled the worst days of her life, far away from her family in the youth detention center. She was charged in the Saba al-Sobh case and the judge ordered her placed indefinitely in a youth detention center. She still hasn't gone to school since her release, and her family is now working on getting her back in class.

"There are constant fights between the girls in the youth detention center. They would always harass us with mean words, trying to drag us into a fight. However, we kept our distance out of fear. Not two days passed without a girl committing suicide. With my own eyes I saw girls eating glass or swallowing pins to commit suicide, or others who would hide liquid soap or liquid cleaners under their blanket, preparing to commit suicide at night. It was a true tragedy for these girls, many of whom have mental illnesses. I lived among them for 38 days, and we don't know why," said Yumna.

"What did we commit? What was our sin? What was our crime?" Yumna asked. "We joined an ordinary peaceful march. We were calling for an end to military rule. We didn't destroy anything, commit acts of vandalism or block the roads. I felt the oppression faced by President Morsi. I have my own mind and my own way of thinking; I won't follow in the footsteps of my father. I believe that Morsi did not do anything that warrants trying him. At the very least, he did not kill thousands of people while breaking up sit-ins, as happened at Rabia [al-Adawiya Square]. During Morsi's era, we didn't see such high numbers of people detained. Despite all of these difficult days in the youth detention center, I will not stop participating and saying no [to military rule]. We all agreed that prison has never been able to change someone's ideas and, just as we took to the streets to say, my country is losing its spirit. We will continue based on the same principle."

Yumna's mother said, "I didn't feel like I was in my county that I love; I felt like I was in Tel Aviv. Incredibly lonely, like I wasn't with my family or my people. My only daughter who I love — and who everyone can vouch for her good morals and manners — has been placed with criminals. I can't stop crying, day and night, because of feelings of defeat and injustice." She asked: "Did I make a mistake by teaching my daughter about freedom?"

At a family event at the Engineers' Club in Alexandria, Al-Monitor met with Bahaa ad-Dine Mohammed, the father of Khadiga, one of the seven girls placed in the youth detention center. Mohammed said, "My daughter was motivated by her sensitivity toward the issue, and she was influenced by the current scene. I don't regret [her actions], and neither does she."

Khadiga said, "I will participate in demonstrations, but only after three months, when the probation period ends. All I want is the removal of Gen. Abdel Fattah al-Sisi, who wants to build prison walls around all of the people."

"The army should work to include these students, and they should realize that if they don't rush to do this, it will be against everyone's interests," said Khadiga's mother, commenting on the escalation of student protests. She added, "The army should know that repression only generates hatred, and excluding these [girls] will not bring about solutions."