A lack of fuel has sidelined garbage trucks in Gaza, prompting officials to switch to animal carts for collection. 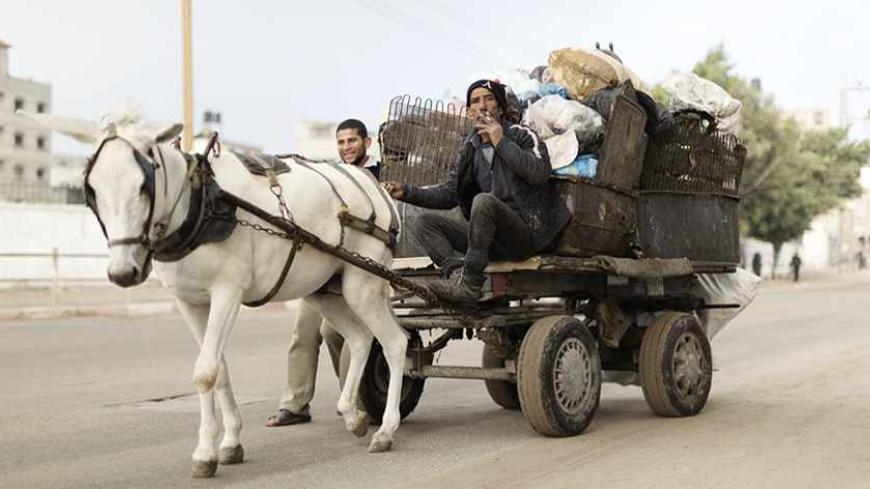 GAZA CITY, Gaza Strip — Donkeys and mules have become increasingly important as a means of transportation in Gaza, with the Israeli-Egyptian blockade creating a worsening  fuel crisis affecting all aspects of daily life. Just how important was made clear at a press conference near the al-Yarmouk dump on Nov. 24, when Minister of Local Government Mohammed al-Farra announced that all garbage trucks had ceased operating and added, “The government has deducted [money] from the salaries of employees to hire 430 workers to collect waste off the streets of Gaza by means of animal carts.”

Livestock had also played a role earlier in the blockade, helping ease transportation woes and the cultivation of crops after tilling machines became unusable. Fawzy al-Agha recalls those days. “When the 2008 blockade intensified, anyone who owned a donkey was seen as lucky. Vehicles were no longer functional as fuel became scarce. The price of donkeys skyrocketed, reaching more than $1,000,” he told Al-Monitor. “I dread that this scenario might be repeated. It would be a disaster.”

Municipalities' reliance on animal carts to collect refuse provides job opportunities for the poorest in Palestinian society, giving them a chance to earn money. At his news conference, Faraa revealed that 1,700 tons of refuse are collected daily.

Mounir al-Saidi strikes out every day at dawn on his animal cart to collect garbage from the streets and bins. He told Al-Monitor: “The municipality of Gaza called me up recently due to the crisis it is going through. My role is limited to collecting refuse and taking it to al-Yarmouk dump in downtown.” Loading trash onto the back of his cart, he said that the municipality had offered cart owners $280 a month, provided they fill theirs carts and work responsibly.

As Khalil al-Kaissi slowly drove his cart along al-Wahda Street, his teenage son Mohammed followed behind in his bare feet, throwing filled garbage bags onto the back of the cart.

“Days ago, I was working in a densely populated residential area, but I was prohibited from collecting refuse in upscale neighborhoods. Nowadays, there are no restrictions, because litter trucks are completely out of operation,” Kaissi told Al-Monitor. He explained that he had kept his son out of school that day so he could help him collect as much trash as possible. “When the trucks are not working, carts are. This is our work season, and we should take advantage of it and collect as much trash as possible to earn more money,” he added.

Farra said at his press conference that the fuel crisis has led to the creation of 10 makeshift dumps in the middle of residential areas, but municipalities are trying to stop the trend to prevent pollution from getting into the groundwater and preempt the possible spread of disease.

A garbage collector loads trash into a dumpster in Gaza City, Dec. 4, 2013 (photo by Sami Haven)

He further explained, “Municipalities are currently unable to buy fuel as its price has doubled. Also, there is high demand [for oil] from the electricity generating company,” which is dealing with its own problems due to the fuel shortage. Faraa called on international parties and fellow Arabs to urgently intervene to put an end to the growing crisis. He said the municipalities need 150,000 liters of fuel each month to operate vehicles and various apparatuses, in addition to 7,000 liters to operate water and sanitation facilities.

Abdul Rahman Abu al-Qumboz, general director of health, said during the same news conference, “Seventy trucks are out of operation in the municipality of Gaza alone, which will lead to an environmental catastrophe with unknown results.” He noted that if the situation remains as is, “The dump in the city will be filled to capacity, dangerously exacerbating the crisis.”

At times, the relative inefficiency of the carts compared to trucks in terms of organizing collections and scheduling has led citizens to burn the garbage bins near their houses to rid the area of foul odors. They do so without taking into consideration the potential danger of the noxious fumes released into the air.

Gazans have not only made use of donkeys and carts for transportation, cultivation and refuse collection, but for emergencies as well. Of note, during the Israeli war on Gaza in late 2008, carts were used to transport the wounded to hospitals when ambulances were unavailable or occupied. They have not been spared during Israeli military raids. For instance, a cart pulled by a donkey was hit on Jan. 18, 2012, killing two Palestinians  on the outskirts of Beit Hanoun in northern Gaza.

Donkeys have also been used militarily, such as for transporting bombs. Militants have also used donkeys to conduct "suicide" missions, as occurred on May 25, 2010, when, according to an Israeli army statement, two Palestinians used a donkey-drawn cart to deliver a bomb to an Israeli target. The cart exploded before reaching its destination.