To assert his leadership of all Palestinians, Mahmoud Abbas should visit the Gaza Strip and show his support for Palestinians there. 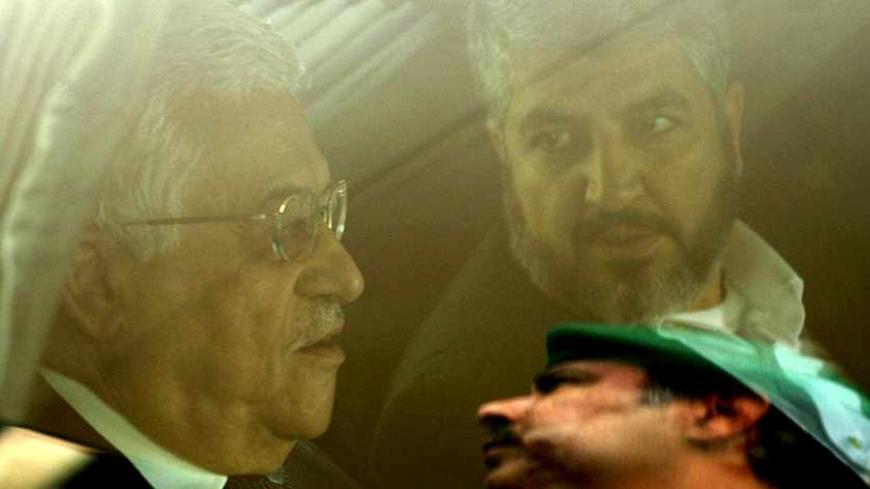 The Dec. 16 entry on her Facebook was simple yet powerful: “Imagine if President [Mahmoud al-] Abbas would visit Gaza and take a look at his people there following the Alexa storm. Imagine how he will be received by Ismail Haniyeh. … People who have been drowning will certainly come out and welcome him.”

The entry was by Rawya Shawa, a prominent independent member of the Palestinian Legislative Council. It is unclear if this was an innocent wish, or if she was privy to any information about the state of Palestinian reconciliation. The entry coincided with two important phone calls: the first between Gaza’s de facto ruler Ismail Haniyeh and Palestinian Authority Chairman Mahmoud Abbas (Abu Mazen) and followed by what has been reported as a thank-you call from Hamas leader Khaled Meshaal to Abbas. Press reports have said that Meshaal thanked Abbas for the efforts he has made since the snow storm to help out Gazans by sending badly needed supplies and intervening with the Israelis to loosen up Gaza’s blockade.

Gaza’s humanitarian situation has been horrendous. The United Nations has reported more than 10,000 Gazans having to relocate because of the flooding. Photos circulating around the world showed Gazans being rescued in front of their "drowning" homes with boats and other floating devices. Electricity has been cut off because of a lack of fuel, and the desperation of the population as expressed in various social media outlets is heartbreaking. A Gazan blogger, Mohammad Omer, made the following appeal on his Twitter account: "I am charging my computer using a car battery to get this message out. It is so cold in Gaza."

The increment weather has not only affected the Gaza Strip but also the local infrastructure. The ability of the Hamas government to deal with the conditions has been by far its worst trial to salvage a situation. The UN, with help from other organizations, succeeded in getting water pumps into Gaza, but a UN spokesman said they need five more pumps to be able to pump out all the water that has turned streets into rivers. Homes have been flooded by water, and it will be difficult to return even after the water has been pumped out.

Politically, Gaza has been spinning its wheels with its reconciliation process being halted due to a lack of implementation. The Hamas-led government seems to be suffering from deep internal division. Delay in implementing the reconciliation process appears to be the result of a lack of enthusiasm by the Izz ad-Din al-Qassam Brigades, which many call Hamas’ military wing. It is unclear whether Meshaal or Haniyeh have any say in the brigades’ decision-making structure. Nevertheless, the one Gazan who has influence on the al-Qassam Brigades is senior Hamas figure Mahmoud al-Zahar, who has reflected on the current crisis by sharply criticizing Abbas and the Ramallah-based government over its talks with Israel.

The issue of the talks was said to have been brought up in the 10-minute discussion between Meshaal and Abbas. Abbas reassured the Hamas leader of his steadfastness on Palestinian rights and reiterated that any agreement to be reached will be placed before the Palestinian people in a referendum prior to it becoming effective.

If and when Abbas does make the visit to Gaza, he will not be met as one of the most popular independent civil society leaders. Eyad Sarraj, the founder and director of the Gaza Mental Health Center, died at the age of 70 from cancer. Sarraj, whose work on the mental health of Palestinian children has brought attention to this segment of society, was a fierce independent figure regularly calling for reconciliation between Palestinian factions.

As in most politically charged conflicts, the big losers are the people who continue to suffer the tug of war between politicians who are juggling for political power. The outrage of the situation in the Gaza Strip, however, should overrule any petty political difference. If a visit by Abbas to Gaza could shake up the current stalemate, so be it. Doing nothing and hoping that one side or the other would give in has become unacceptable for Palestinians.

If the Gaza Strip is indeed part of Palestine, Abbas must do everything he can to help rescue his people, including, if needed, visit. The 90-minute drive from Ramallah to the Gaza Strip will shake up the political situation, and more importantly will give a tiny glimmer of hope to a hopeless population that has long given up on politicians.