Despite despair, no signs of third Palestinian intifada

The youth of the West Bank are tired of occupation, economic crisis and corruption, but with no charismatic leadership, they do not envisage a third intifada. 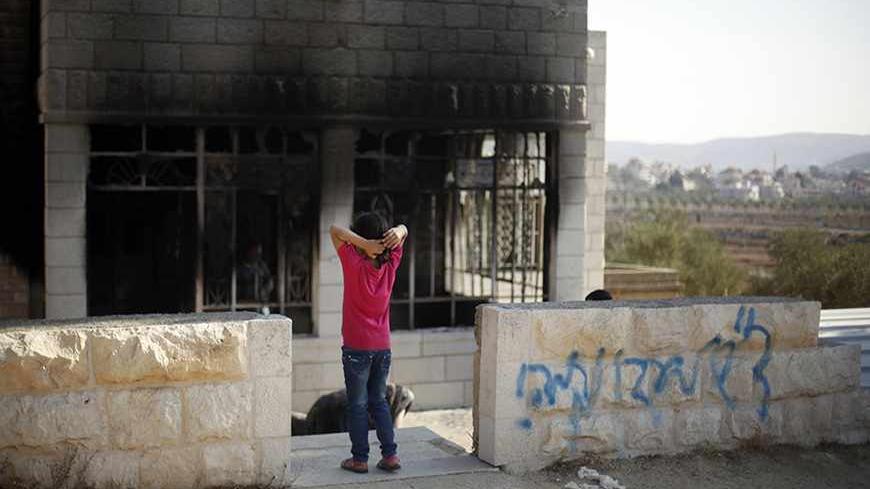 A Palestinian girl stands outside her torched house next to graffiti spray-painted on an outside wall of the home, in the West Bank village of Sinjil, near Ramallah, Nov. 14, 2013. - REUTERS/Mohamad Torokman

NABLUS — While the vociferous argument between Israeli Prime Minister Benjamin Netanyahu and US Secretary of State John Kerry over the Iranian nuclear file was still going on, it is about the Palestinian issue that Kerry sent a warning to Netanyahu. According to him, if the current round of talks between Israel and the Palestinian Authority doesn’t end with a diplomatic arrangement, a third intifada could erupt in the West Bank.

Kerry’s threat, which has been echoed by people in both the West Bank and Israel, received chilling affirmation on Nov. 13, when a 16-year-old Palestinian boy murdered Israeli soldier Eden Atias on a bus in Afula. Israeli security officials described the incident as another “mood-based attack,” i.e., an attack planned and carried out by an individual motivated by the overall atmosphere in the West Bank, rather than by someone sent to commit it on behalf of one of the Palestinian groups. Atias is the fourth Israeli to be killed in such an incident over the past three months. Three of the victims were soldiers, and one was a civilian.

During a visit to the West Bank this week, I tried to identify what it was about the mood that motivated young individuals to launch these kinds of terrorist attacks. I began my visit in Ramallah, which I reached by crossing through the Qalandia checkpoint – a site of daily friction and conflicts between Israeli forces and young Palestinians. The soldiers at the checkpoint were more cautious than usual, and more edgy too. Everything there moves at a snail’s pace. Each car undergoes a meticulous examination, and a long line stretches out along the road leading to the barrier. Ibrahim, a taxi driver, has been waiting patiently there for an hour and a half. He told me, “We have taken a step backwards. Any crazy man who decides that he is going to launch an attack destroys everything that we have managed to build since the war between us ended.” By war he means the second intifada, which took the lives of more than 4,000 Palestinians, led to extensive destruction throughout the West Bank and brought about the economic collapse of the Palestinian Authority.

Ibrahim has been working the Ramallah-Jerusalem line for almost 20 years now. He hasn’t forgotten the days when the checkpoints were closed, and he couldn’t bring home food to feed his children. “So the Palestinians shouldn't even think about starting a new intifada?” I asked him.

“I’m not saying that they can’t think about it,” he answered. “What I am saying is that our side and your side should meet and start to get things rolling. They should give us our share. Wouldn’t it be a pity if there are even more victims? Haven’t there been enough already?”

It is more than just exhaustion from the second intifada that is causing so many people in the West Bank to completely reject the possibility of another major popular uprising. Over the past few years, the exhaustion and sense of desperation felt over an occupation with no end in sight, has extended to frustration with the Palestinian leadership. Even those who have kind words to say about the Chairman of the Palestinian Authority Abu Mazen, have no respect for his leadership abilities. Abu Mazen lacks charisma, and the feeling on the Palestinian street is that as long as there are no leaders to encourage them, embolden them and spur them into action, there will not be enough energy for another round of national protests. In fact, Palestinian security forces are taking steps to thwart all local efforts to organize disturbances.

A new intifada is not in the Palestinians’ interest right now. Most of all, it is not in the interest of the Fatah movement, which would lose control of its grip on both the territory and the local government if there is chaos in the West Bank. I spoke with the Palestinian policemen on duty in Manara Square, Ramallah’s main square, which was once a focal point for mass demonstrations. Ali, who patrols the area around the square in the dark blue police uniform of the Palestinian police, says something to me in fluent Hebrew, which sounds a lot like a condemnation of the murder of Eden Atias. “We don’t support killing. We’re even opposing it. We oppose it. But take a look at the young people here. They have no work, and they have nothing to eat, so they go ahead and do what they do.” What he did not say is what many others think and even whisper quietly: Blame for the economic crisis does not just fall on Israel. Abu Mazen is also at fault, as are senior Fatah officials, and overall corruption throughout the Palestinian Authority.

Young people in the refugee camps and the suburbs of the smaller cities can be heard talking openly about what is motivating them to launch attacks. A group of young people walking along the road outside Nablus, between the settlements of Itamar and Har Bracha, have no qualms about telling me how Palestinian teens feel today.

“Your settlers are causing all the problems,” they tell me. “They burn our property, shoot at us and do whatever they want.” A few hours earlier, shortly before dawn, masked men, apparently settlers, entered the nearby village of Sinjil and tried to set fire to one of the houses, with all the inhabitants still in it. Before fleeing the scene, they scrawled on a wall: “Regards from Eden. Revenge.”

“Do you think we are at the start of another round of protests?” I asked these young people as they meandered down the road.

“Could be,” they all answered unanimously. Then the youngest added: “We have nothing to lose. Enough already! We’re sick of it!” His two friends nodded their agreement and smiled. I couldn’t tell if they were smiling in anticipation of my response, or if they realized that the young Palestinian was only saying what he thought the Israeli journalist wanted to hear.

The most fascinating analysis, however, was offered to me by a young engineering student at Al-Najah University in Nablus. “We’re tired. We haven’t got the strength for more wars, more casualties and more checkpoints. But people are dying. Just before they give up their souls, they want to do something that will help them be remembered long after they are gone.”

“Have you reached that stage?” I asked him.

“Not yet,” he answered, “but we will get there. When there is only one way out, people eventually get to it.”

A visit to the towns and villages of the West Bank offers a very clear picture of the mood among the Palestinian public. The sense of desperation lingers everywhere, but so does the fear of what another round of violence might bring. It is quite possible that the young people of the West Bank are sitting on a barrel of gunpowder, as people throughout the region like to describe it. But it seems that at least for now there is no one to ignite it.