Mandeans and Christians in Iraq adjust to and sometimes join the commemorations of the death of Hussein bin Ali during the lengthy Shiite mourning period. 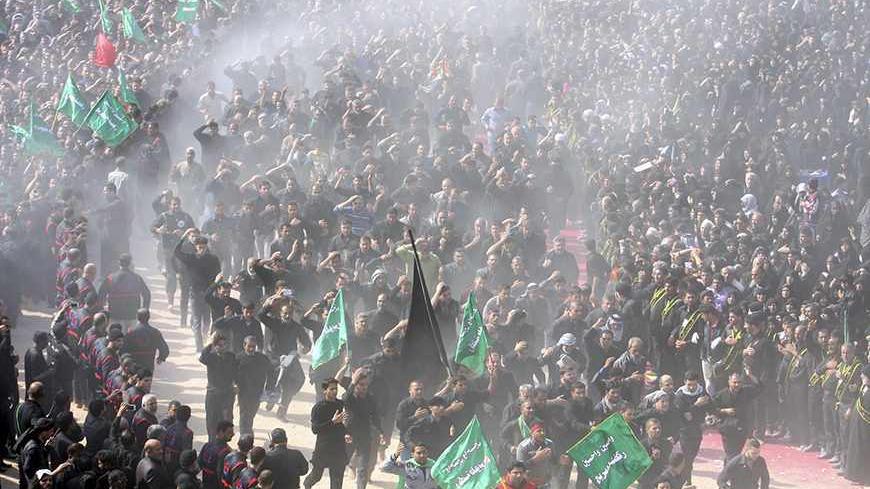 Shiite pilgrims run between the Imam Hussein and Imam Abbas shrines as part of a ritual of the Ashoura ceremony in Karbala, 100 kilometers (62 miles) southwest of Baghdad, Nov. 14, 2013. - REUTERS/Mushtaq Muhammed

The Islamic months of Muharram and Safar are marked by Shiite mourning — in commemoration of the martyrdom of Hussein bin Ali — that takes place in all social scenes of Iraqi Shiite areas. Black flags, banners and Shiite symbols prevail throughout villages and towns. Mourning prayers and chants are broadcast everywhere. People march in large mourning processions that begin from the farthest cities in southern and central Iraq and end in mass rallies on the 10th of Muharram and 20th of Safar in Karbala, 100 kilometers (62 miles) southwest of Baghdad.

This phenomenon constitutes an all-encompassing social power which makes it difficult for non-Shiites to distance themselves from it. Thus, non-Shiites would be left with two options to deal with this situation: Either they react positively toward it as a way to identify with the majority, or they become more dogmatically biased toward their own sect. Eventually, the practice of this phenomenon is seen as a social challenge to the different sects in Iraq in one way or another.

Before the emergence of sectarianism in Iraq, the Shiite phenomenon of mourning used to be a general cultural event, as other sects would join Shiites in carrying out these ceremonies out of sympathy rather than religious duty. This still happens to a certain extent in some areas, although they have dwindled due to sectarian ditching and extremism in carrying out these practices. As a result, this phenomenon has become linked to Shiite identity rather than a cultural humanitarian practice in which other people can participate.

Minorities feel that they are under siege and are being attacked within a dominating cultural environment. They feel they cannot be publicly present, unless within the cultural framework of the predominant religious majority. Thus, they try not to clash with this social power by refraining from taking any action that could be understood as being contradictory to the mourning phenomenon.

For instance, in recent years Christmas has coincided with the Shiite mourning period. Christian religious figures issued statements calling on their fellow Christians to limit celebrations within churches and avoid any aspects of joy, celebration and decoration in public spaces. These statements were widely welcomed by Shiite organizations that considered it as showing solidarity with Shiites.

Although this phenomenon represents a case of historical coexistence among Iraq's communities, it — on the other hand — shows the totalitarian authority of the majority over religious minorities, especially when this question is raised: Do Christians have another choice whenever Christmas coincides with the Shiite mourning period?

As an answer to this question, Christian figures are trying to look at the situation from a general humanitarian perspective in the context of historical coexistence between the different spectra of Iraqi society.

In an interview with Al-Monitor, Bishop Imad al-Banna — acting bishop of Basra and southern Iraq — said, "From our point of view, to avoid showing aspects of joy and celebration is not seen as a compromise, as much as it a deep sense of [solidarity] with our brothers in the homeland and embodiment of the general religious ethics and a concrete act reflecting the interfaith dialogue."

Shiites, on the other hand, are also trying to communicate with others through their mourning, namely with Christians who share with them a major tragic religious legacy — the story of the death of Christ, as opposed to the death of Hussein for Shiites. This is done through the use of communication tools, among other methods, such as the use of words that have a Christian background to refer to Shiite symbols. For instance, Imam al-Sajjad — the fourth Imam for Shiites — is called "the Monk." There are many stories that focus on the participation of Christians in mourning Hussein since the incident occurred in 680. This is not to mention the use of different graphic icons showing the tragic Christian-Shiite interaction or comparisons between Christian symbols — such as Christ himself and John the Baptist — and Shiite symbols of the Ashoura tragedy.

Moreover, some minorities are trying to participate directly in the Shiite morning phenomenon, beyond linguistic and semiotic communications. On occasion, some Mandaeans and Christians of various persuasions march in mourning processions and rallies on their own.

Although Shiites usually greet these processions with great warmth, there have been exclusionary practices by some ordinary Shiites due to certain religious perceptions related to the relationship with non-Muslims.

Al-Monitor interviewed a few Mandaeans who had participated in these processions. They said some Shiites would clean or break the dishes and cups they had used because they believed they were impure.

With regard to Sunnis, on the other hand, their participation in the Shiite mourning has clearly lessened in the past few years, after it has been a common phenomenon for many centuries. This is due to "sectarian entrenchment," "militancy in carrying out these rituals” and the “spread of the extremist ideology, which considers the Shiite mourning as some sort of polytheism, among some Sunni groups."

What happened recently with the British worker who was attacked because he removed a mourning banner from a vehicle owned by a British company in Basra is further proof of the authoritarian image that has appeared in the Shiite mourning phenomenon in the past. There was widespread criticism among Shiites and Sunnis in two different directions. Shiite leaders and intellectuals denounced this act and called for being more rational and ethical in performing the Ashoura rituals, while radical Sunnis tried to use it to spite Shiites.

In such circumstances, Shiite leaders are required to exert necessary effort to control the widespread radical mourning practices and prevent them from turning into a social authority imposed on others.

While the cultural and humanitarian aspects of this phenomenon have promoted it in the past, radical practices being imposed in the public space may lead to the rejection of this Shiite ritual in the near future.