Netanyahu is wrong on Iran deal

Iran is going beyond its IAEA commitments in the six-month agreement reached in Geneva. 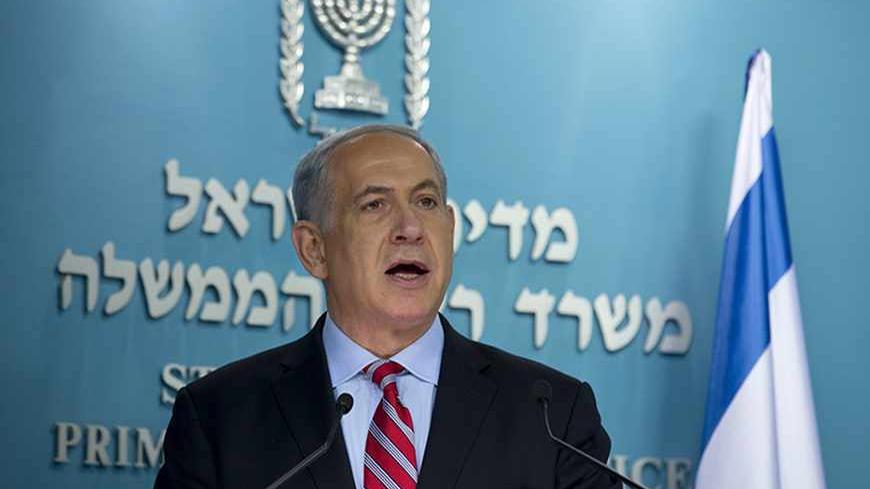 The latest deal between Iran and the five permanent members of the UN Security Council and Germany, or P5+1, is not a “historic mistake” because it has allowed the Iranian government to make a “significant step to attaining the most dangerous weaponry in the world,” as Prime Minister Benjamin Netanyahu put it.

In fact, the opposite is true.

The Geneva deal is going to force Iran to take a step backward from the capability to make a nuclear weapon, if and when it decides to do so.

For how long? At least six months.

It does so by blocking the two routes which Iran could take to make a nuclear weapon.

First is the enrichment route.

The closest thing Iran has to weapon-grade enrichment (90%) is the 20% enriched uranium being produced in the Fordo nuclear site.

The Geneva deal which Iran has signed stops Iran's 20% enrichment manufacturing process and calls for Iran to neutralize its stockpile of 20% enriched uranium. Therefore, for the coming months, Iran could not go down this route.

But some are worried that Iran may try to “sneak” past the International Atomic Energy Agency (IAEA) inspections and secretly “break out” to make higher-level uranium (90%) to make a weapon at its two enrichment sites at Natanz and Fordo.

Well, the new deal makes that almost impossible. According to the new agreement, the two enrichment centers will get daily inspection visits from the IAEA. The frequency of such daily visits is unprecedented. In fact. Natanz and Fordo will now get more visits from foreigners than some of Iran's tourist sites.

Others could say, well, during this time Iran could sneak some of its centrifuges to a new site to make secret enrichment facility to make a weapon. The deal also prevents this from happening, for according to its terms Iran has agreed to provide IAEA access to centrifuge assembly and centrifuge rotor-component production and storage sites. It must be noted that according to its commitment to the IAEA, Iran is not obliged to declare such sites. Therefore in this deal, it is going beyond its responsibilities to bring transparency to its centrifuge-making centers and capabilities.

The other route to make a weapon is through the plutonium route.

Iran is currently constructing a reactor (called IR40) which once completed, will use heavy water as fuel to manufacture electricity. The residue from the spent fuel could be used to extract plutonium to make a weapon. The deal also stops any progress on this track, and with it any possible Iranian intentions to make a weapon. This is because in accordance to French demands, Iran has agreed to end building the IR40 reactor. According to the text of the deal, Iran has agreed to “not install any additional reactor components at Arak.” This is in addition to the agreement that Iran would “halt the production of fuel for the Arak reactor” and not to commission the IR40 reactor.

Despite all this, there is always a question of trust. The Israeli government could be worried about Iranian officials lying and not delivering on their promises.

This is a realistic possibility. Politicians lie, and this also includes Israeli politicians. President Hassan Rouhani lied on the podium of the UN General Assembly when he stated that Iran's objective has always been the pursuit of nuclear program for “exclusively peaceful purposes.” As a 2007 US National Intelligence Estimate showed, Iran had an active military nuclear program until 2003.

However, when it comes to post-revolution Iran, history has shown that when it comes to agreements, what keeps the Iranian government to its word are its own interests. When its interests are not served, contracts becoming meaningless. Just ask the Turkish construction company TAV which in 2004 was expelled from the contract to build Tehran's Imam Khomeini airport. As relations with Turkey soured — and, more important, the Revolutionary Guards saw its economic interests hurt by the deal — the Turks were kicked out. It is not yet clear of they received any actual compensation.

At the same time, history has also shown us that when its interests are served, the Iranian regime will stay loyal to contracts which other people may have walked away from and broken. The case in point is the Bushehr nuclear power plant. The Russians are already 12 years behind schedule on that project, at least $4 billion over budget, costing Iran an additional $24 billion opportunity cost (Iran was hoping to save $2 billion a year in fuel costs by using nuclear power). Any other country would have kicked out the Russian contractors by now. But the Iranian government has not, because it serves its interests to have a continued working relationship with the Russian government, even if it means putting up with one of the worst contracts.

And when it comes to the current contract, the chances of Iran not living up to its commitments are low, because if it is discovered that it has cheated, additional economic sanctions could be imposed, and this could pose an unprecedented threat to the regime. The reason is simple: The regime can live without its nuclear program, but it can't live without its economy.

The Geneva deal managed to persuade the Iranian government to do what essentially serves Israeli interests — to freeze activities for six months which could be used to make a weapon while negotiations take place. More will be demanded from both sides, which includes Iran. This includes transparency for its previous suspect activities. This will be done as part of a final deal.

Dismissing this deal by stating, "We're going to see Iran do what it's always done in the past — fudge its commitments and attempt to violate the deal," as Israel's former UN Ambassador Dore Gold did recently before the ink on the agreement dried, is wrong. Everyone lies. Israel has “fudged its commitments” when it has come to settlement activities. The question is how to create threats and benefits to convince the other side not to ignore their commitments. Diplomacy, sanctions and the current Geneva deal could just do that with Iran.