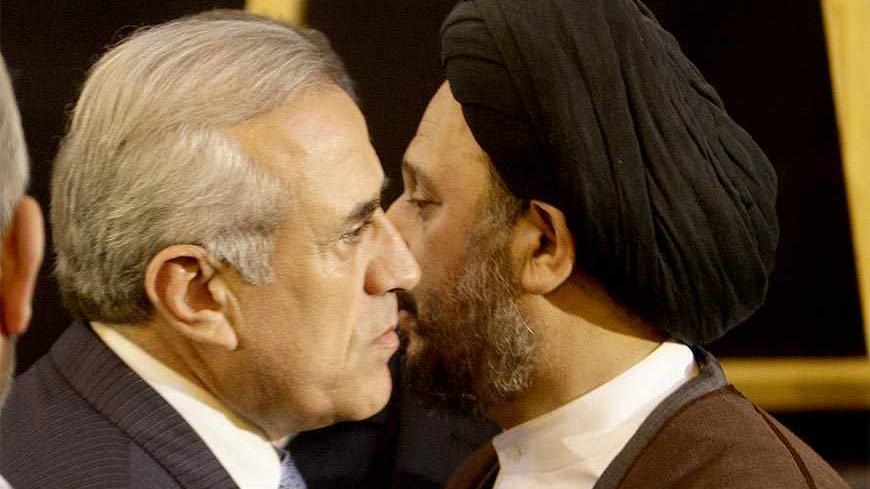 "God taught us how to converse with all people. There are no sanctities when it comes to dialogue. God Almighty himself spoke to the devil. Are there people like the devil? Also, the Quran is a book of dialogue with polytheists about the unity of God, and with infidels about the existence of God and the prophecy of Muhammad." This is how the late Lebanese Shiite cleric Mohammad Hussein Fadlallah responded when asked about the increased talk of interfaith dialogue in the 1990s.

The occasion to talk about the late Fadlallah today, and about his call for dialogue with the "Other" — especially with other Christian and Islamic sects — is an initiative launched by his son, the scholar Sayyed Ali Fadlallah. The latter established the "Religions and Cultures Forum for Development and Dialogue," in which 50 different personalities participated, including Muslim and Christian clerics and intellectuals from Lebanon and other countries of the Arab and Islamic world.

This forum was announced by Fadlallah during a ceremony held in Beirut on Tuesday, Oct. 30, attended by MPs, politicians, party leaders, intellectuals and media figures. The most prominent attendees included the head of the Loyalty to the Resistance (Hezbollah) Bloc, MP Mohammad Raad; the head of the Islamic Group in Lebanon's political bureau, Azzam Ayoubi; a representative of former Lebanese President and Kataeb Party leader Amine Gemayel; and delegations from the Amal Movement and the Progressive Socialist Party.

A number of religious leaders were also in attendance, including the Rev. Fadi Daou, a representative of Maronite Patriarch Cardinal Bechara al-Rai; Rev. Sulaiman Wehbe, a representative of the patriarch of Antakya, Alexandria and Jerusalem for the Melkite Greek Catholic Church Gregory III Laham; a representative for the papal ambassador to Lebanon; Archbishop Daniel Sukkar, a representative for Supreme Head of the Universal Syriac Orthodox Church Patriarch Ignatius Zakka I Iwas; and a number of Sunni, Shiite and Druze religious scholars from Lebanon and the Arab and Islamic world. The most notable among the latter were the General Secretary of the Supreme Islamic Legislative Council Sheikh Khaldoun Oraymit, and Sheikh Sami Abou al-Mona, who represented the spiritual leader for the Druze sect Sheikh Naim Hassan.

Sayyed Ali Fadlallah, in an exclusive interview with Al-Monitor, said, “The idea of an interfaith and inter-sect dialogue was proposed at this stage — when there is an increased need for national, regional and international dialogue — and will be based on humanity, life, values, rights and duty.” He explained, “The initiative stems from the foundation laid by the late Mohammed Hussein Fadlallah, as well as from the latter's experience with dialogue and the credibility that he gained. These are things which dialogue can be built upon.” He added, "What distinguishes this forum is that it did not come out of nowhere. It was inspired by Sayyed Fadlallah's approach. The latter was believed in dialogue and was very serious about it, working to ensure these discussions were actually carried out. He would speak to those who differed from him, even in the most complicated situations."

When asked about the objectives of this initiative, Fadlallah said, "The goal of the forum is to open doors, reach common ground and mitigate the negatives. Dialogue helps to cool sectarian tension.” He said that the forum would try “to create an atmosphere of cooperation and joint work on dialogue topics, at the Arab-Islamic and international levels. This is in order to bridge the gap between various religions and sects, to organize joint projects between them, to strengthen the ties between our people and to renounce sectarian and political strife.”

Regarding what distinguishes this initiative from earlier ones, Fadlallah said, "We have made prior efforts, and this forum is not an alternative to other dialogue forums, nor is it a repeat of them. What distinguishes this forum is that it will be implemented on the ground, in universities and cultural forums, and will not be limited to intellectual, religious or political elites.”

He noted that the forum would include four committees, each with its own task: Islamic Relations (Sunni-Shiite), Christian-Islamic Relations, Freedom and Human Rights and Scientific. There will also be an advisory body to guide public policy for the forum.

Fadlallah stressed the importance of science and education in dealing with intellectual and religious deviance, especially the increased level of religious extremism, sectarian violence, strife and conflicts of all sorts. He said, “All bets now were on the Scientific Committee, which would conduct analysis and research about these problems, as well as spread awareness and knowledge in order to bridge the existing chasm between people on both the religious and cultural levels.” He said, “The root of the problem lay in people turning their backs on values and humanitarian ideals, and that present-day religious discourse needed to be predicated on the universal constants of values and human rights.”

The importance of the scientific and educational aspects necessitates that the forum task its Scientific Committee with studying the points of contention between sects and religions in a scientific and academic manner away from prejudicial opinions, and issue quarterly books, electronic magazines and other publications that extol the values and culture of dialogue. Likewise, the Scientific Committee must endeavor to establish a scientific academy for dialogue between religions and cultures, where a specialized scientific cadre can be trained in various programs used to enhance dialogue.

Fadlallah revealed to Al-Monitor that his late father, the religious authority Mohammed Hussein Fadlallah, had proposed the idea of holding a dialogue with the Salafists, who exhibited willingness to do so. But his illness and subsequent death prevented the initiation of such a dialogue.

About the forum’s chances of success in solving religious and sectarian problems, despite that most of them are attributable to political conflicts and the meddling of regional or major powers, as well as parties and political groups, Fadlallah said that they were aware that the situation fell beyond the scope of the forum. He noted that dialogue alone was not the answer, although it contributed to alleviating tensions and, with time, could help solve major issues by spreading awareness and the culture of tolerance and coexistence.

When countered with the fact that attempts to bring Muslim sects closer together, which started in the 1940s, failed as animosity increased between Sunnis and Shiites, and the conflict between them transcended disagreements about faith and doctrine to become a political and military one, Fadlallah asserted that the problem with previous attempts toward sectarian rapprochement was that they were initiated through official formal channels and characterized as being either of Iranian or Saudi origin. In this regard, he pointed out that his father faced great difficulties because of Shiite extremists who rejected his call for Muslim unity and rapprochement with the Sunnis.

About whether he was optimistic about the forum’s chances for success, Fadlallah said: “We are wagering on the serious intentions of the parties, and are inspired by Mohammad Hussein Fadlallah’s experience. We know that there are obstacles to overcome, and cannot assert that we will succeed. But, this framework gives us larger room to maneuver, due to the respect that everyone has for my father, be they Christian, Muslim, Lebanese, or Arab.”

Sources from within the forum’s Founding Committee revealed to Al-Monitor that the initiative was garnering considerable support from Christian religious authorities. This is because it took their concerns and fears into account and served to help combat extremism and terrorism, which both Christians and Muslims suffer from, but which are leading to Christians emigrating from the Middle East. The same sources added that the Preparatory Committee had had contacts with the leaderships of Hezbollah and Amal, which both backed the initiative. Furthermore, the sources noted that dialogue would not be limited to Muslim-Christian and Muslim-Muslim discussions, but would also include discussions between religious and secular factions.

Maronite Patriarch Bechara al-Rai warmly welcomed and supported the forum initiative because it served to promote dialogue and research into ways to combat extremism. For everyone is concerned, not just the Christians of the Middle East. In a speech delivered on his behalf by Father Fadi Daou during the ceremony, he expressed his view that the importance of the initiative lay in its ability to better our daily lives and coexistence. Otherwise, the forum would be relegated to the same fate suffered by other initiatives that were based on theories and courtesies, without them having any effect on people’s daily lives. He hoped that the forum would encourage public figures to join this initiative and strive for dialogue, so that man and society progress and develop.

Rai’s words got to the heart of the matter; for Muslim-Christian and Sunni-Shiite dialogue attempts have been occurring for the past 70 years in Lebanon and the Arab and Muslim worlds, but they have not been able to prevent the rise of religious fanaticism and the spread of radical extremism. This is because they remained confined to the elite among the clergy and intellectuals, whose agreements were not reflected in their followers. In fact, there may have been a dichotomy of rhetoric used — one that prevailed in conferences, seminars and the media — which called for tolerance and dialogue, and another religious sectarian one, used to mobilize and incite each sect’s adherents in parties, mosques and churches.

The Forum’s Preparatory Committee, chaired by Sheikh Hussein Shehadeh, visited Cardinal Rai, Patriarch Laham, the head of the Assyrian Church in Lebanon the Rev. Yatroun Kolania, the Rev. Roueis al-Orashalimi of the Coptic Church and the Apostolic Nuncio Gabriel Katchea, in addition to Muslim, political and partisan leaders, who were all invited to participate in the forum.