The details and process for US Secretary of State John Kerry's $4 billion economic plan to date are discouraging. 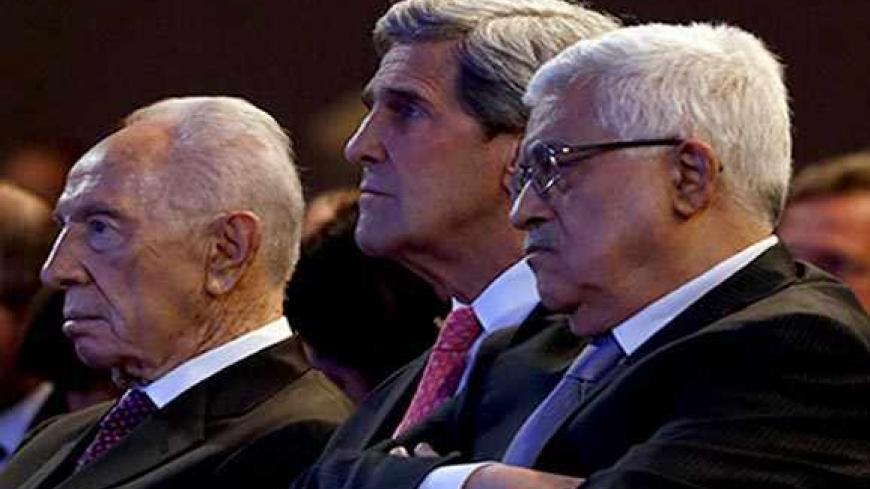 US Secretary of State John Kerry (C) is joined by Israeli President Shimon Peres (L) and Palestinian President Mahmoud Abbas at the World Economic Forum at the Dead Sea, Jordan, May 26, 2013. - REUTERS/Jim Young

Numerous statements were issued by Palestinian negotiators predicting the failure of the negotiations. There were also news reports that President Mahmoud Abbas might withdraw at any time from these negotiations, which had yet to achieve any breakthrough. Moreover, the media reported Thursday, Oct. 17, that the ongoing negotiations with the Palestinians had reached a deadlock because the two sides fundamentally disagreed over borders. At the security level, information was scarce given the nature of the security negotiation path. In this article we will discuss the third path, the economic one.

From Kerry to Blair

Following the end of World Economic Forum — during which the plan was announced — former British Prime Minister Tony Blair was appointed the Quartet's representative and a team of international consultants was entrusted with the task of preparing the plan, subsequently dubbed the “Economic Initiative for Palestine.” The Office of the Quartet Representative took over the task of preparing documents, files, and studies for this plan, while the entire Palestinian community awaited the white smoke from the office of the Quartet in the occupied city of Jerusalem.

Since Kerry’s announcement of his plan and the entrustment of the Quartet Office to draft the detailed plans, a major contradiction has emerged between the statements on the progress of preparations. While Palestinian Foreign Minister Riyad al-Malki announced Sept. 8, 2013, that Kerry submitted his plan to promote investment and economic growth of the Palestinian economy to the Ministerial Delegation of the Arab Peace Initiative in Paris. The deputy prime minister and economic adviser to the PA president for economic affairs, Mohammed Mustafa, asserted that the United States handed over the written Palestinian economic plan to the Palestinian leadership. Moreover, Mustafa added that Kerry’s three-year detailed plan — spanning more than 200 pages — would target eight key sectors for growth in all Palestinian regions, including the West Bank, the Gaza Strip and east Jerusalem.

According to the website of the Office of the Quartet Representative, the Economic Initiative for Palestine was drafted by a team of international experts in collaboration with the Office of the Quartet. The plan suggests several projects to boost domestic and foreign investment in Palestine to develop the Palestinian economy and provide employment opportunities in the West Bank and the Gaza Strip. The plan covers eight key sectors: construction and housing — including financing of personal mortgages — agriculture, tourism, telecommunications and information technology, energy, water and light industries. The Office of the Quartet Representative provided some details of the plan in its September 2013 report, obtained by Al-Monitor. In summary, the plan includes:

A team of international experts prepares the plan without any participation by the PA or civil society institutions. The plan is instead treated as a confidential and secret document which may not be leaked. In this respect, one may ask how this work methodology is consistent with the Quartet’s allegation that one of its overriding objectives is to strengthen and build the institutions of a promised Palestinian state. It seems that Blair is still acting with the same mentality as the British High Commissioner during the British Mandate for Palestine. He plans for us and on our behalf. He knows our affairs better than we. All the Palestinians can do is wait for the generosity of Blair and his team to deliver a written plan of 200 pages to the Palestinian deputy prime minister. Yet, all we wish for is that the plan be written in Arabic, which is the primary language in Palestine.

No meeting was ever held with local experts or Palestinian civil society organizations to explore the Palestinians’ opinion about the plan’s terms, objectives, funding sources and the party to whom the funds shall be disbursed. Moreover, the PA’s official institutions and Palestinian civil society organizations were completely left out, while numerous terms of this plan were leaked to some businessmen in the Palestinian territories. The latter are planning to conduct international partnerships in to take advantage of the plan’s funding. Therefore, it would be legitimate to wonder whether this plan were for the development of the Palestinian economy or to increase the wealth of the wealthy.

The marginalization practiced by Blair and his office, not only toward the PA and its institutions but also toward the European Union — one of the biggest donors to the Palestinian people — as well as towards some pivotal countries in Europe, constitutes a structural defect in this plan. How can this plan be implemented without the active participation of the parties that support the Palestinian people the most? When I asked the ambassador of a pivotal European country who visited Gaza in September 2013 about this matter, he replied angrily, “We do not know anything about it! Aren’t we entitled to know details of this plan, given that later on we will be requested to fund it?” In another meeting in Paris with a European figure who used to occupy an important position in the Middle East, the latter confirmed to Al-Monitor that neither he nor his government was aware of any details of the plan.

Why have the PA's institutions accepted being ignored is such a humiliating way? They have accepted to be the passive recipient of a plan prepared in advance without being involved in its design, as stated by Deputy Prime Minister Mustafa. Why isn’t this task fully entrusted to the PA’s institutions, which are capable and qualified in this respect?

The plan did not determine the facilities that Kerry promised to exert pressure on the Israeli government to obtain. The plan did not explain how some of the proposed major projects would be executed in light of the continuing occupation, settlements and siege laid on Gaza.

The United States and international organizations always praise the role of civil society and supervisory institutions, so how can they allow the preparation of a plan for the development of the Palestinian economy without the active participation of Palestinian institutions, and without giving the right to supervision and follow-up to the Palestinian legislative and supervision institutions? It seems that Kerry, very enthusiastic and motivated to accomplish a qualitative achievement in the negotiations between the Palestinian Authority and Israel — through his multiple tours of the region and the pressures he exerts on both sides — must reconsider his assignment of the Office of the Quartet to supervise the plan still bearing his name, despite an attempt by the Quartet to strike it.