While the idea of two capitals for two states is being discussed between the Israeli and Palestinian delegations, Jerusalem's mayor and the government promote building plans in east Jerusalem. 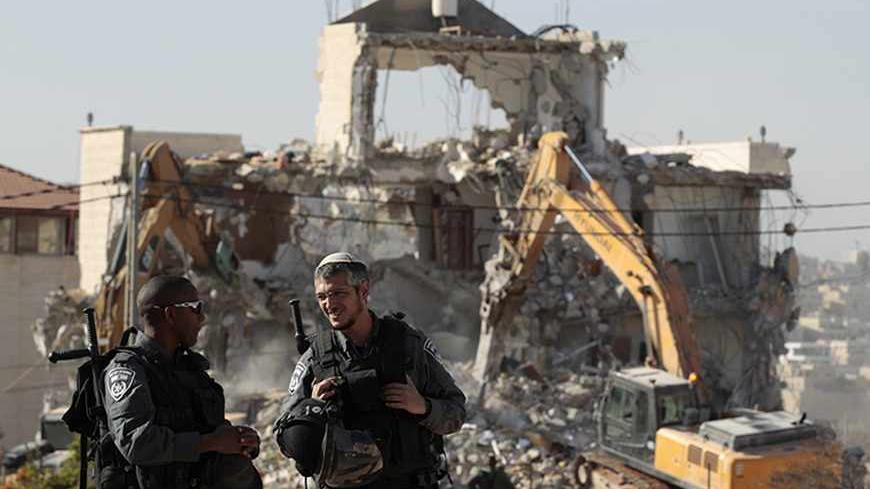 Israeli police officers stand guard as a house belonging to Palestinians is being demolished in the east Jerusalem neighborhood of Beit Hanina, Oct. 29, 2013. - REUTERS/Ammar Awad

“It’s impossible to divide Jerusalem, because you can’t divide an idea.” — Chairman of Yesh Atid, Minister of Finance Yair Lapid.

If this thought, expressed by the leader of the second-largest political party in Israel, a party claiming to represent the Israeli mainstream, were an opinion shared by most citizens, then the statesmen and civil servants working night and day to reach a final status agreement to end the Israeli-Arab conflict were wasting their time. Lapid didn’t stop at inventing empty slogans; he took part in the decision of the prime minister, Benjamin Netanyahu, and Minister of the Interior Gideon Sa’ar to advance a series of construction plans in east Jerusalem, in parallel with the release of Palestinian prisoners. Why not? If you can’t divide the idea of Jerusalem, there’s nothing to prevent the building of new Jewish neighborhoods and the expansion of existing ones in all parts of the city.

The day after the construction plans were announced, on Oct. 30, a special conference organized by the Palestinian-Israeli Peace NGO Forum was held at the Jerusalem Cinematheque, titled, “Jerusalem: two capitals for two states: too late or still possible?” Although the UN special coordinator for the Middle East peace process, Robert Serry, who welcomed conference participants, said, “We must find a way to reach two capitals for two states in Jerusalem,” and even emphasized that his words reflected the explicit position of UN Secretary-General Ban Ki-moon, all of the academic and civil society experts who spoke after him sketched a gloomy picture that raised substantial doubts about this idea.

Danny Seidemann, a lawyer who is one of the most experienced and knowledgeable experts on negotiations regarding Jerusalem, argued that since 2010 we have witnessed a boom in settlement construction that hasn’t been seen since 1967. Seidemann emphasized that this was a strategic move meant to draw a border that would impose Israeli hegemony throughout the greater Jerusalem region. He spoke about a recent meeting he had with a senior official in the Israeli government (at the break he was willing to tell me that this was a defense official), who shared Netanyahu’s position. The official, said Seidemann, admitted to him that the planning and construction in the greater Jerusalem region were meant to achieve what he termed “a reshaping of the territory.”

Seidemann was shocked and immediately noted that the Jewish enclaves being built in east Jerusalem will extinguish the idea of dividing Jerusalem, and by that also the two-state solution. “This is the two-state solution as Bibi [Netanyahu] understands it,” said the official openly. He even complained to Seidemann that he “is stuck in a paradigm of an agreement with the Palestinians.” In response to Seidemann’s warning about the reaction of the international community to Israel’s unilateral moves in Jerusalem, the official “reassured” him by saying, “America is in decline and Europe doesn’t count.” As stated, the official declared that he represents the prime minister’s position.

Meir Margalit, the outgoing holder of the east Jerusalem portfolio in the Jerusalem municipality, reminded participants that Mayor Nir Barkat owed his re-election to the mayor’s office to Finance Minister Naftali Bennett’s supporters from HaBayit HaYehudi party. These supporters have made it their goal to break the status quo in the holy basin. “Pyromaniacs are walking around here with gasoline,” he said, and added “the home demolitions that took place this week are only a preview.” Margalit, who until the last election [Oct. 22] was the Meretz representative on the city council, accused Barkat of covert and clever “Israelization” of east Jerusalem, while bringing about the dissolution of the Palestinian community through deepening residents’ dependency on the Israeli regime. Thus, he said, Jerusalem was gradually turning into a binational city, a large part of whose residents were disconnected from a national or political context.

However, the forced “unity” doesn’t satisfy the “pyromaniacs” as Margalit characterizes them. Yizhar Be’er, the author of a comprehensive report on the strengthening of the temple movements in Israel, recalled what the deputy head of the Shin Bet said at the trial of the members of the Jewish Underground who tried to blow up the mosques on the Temple Mount in the 1980s. The realization of their plan, he estimated, would have caused the entire Muslim world to declare war against Israel, with a real risk of its destruction. According to Be’er, while the Jewish Underground was roundly condemned, the Temple Mount agenda has become part of the discourse of the religious Zionist public and its leaders. The notion of the purification of the Temple Mount and the building of a third temple is raised by the rabbis, and the Jewish legal taboo on entering the compound has been lifted. Two new members of the Jerusalem city council (Shmuel Shakedi and Aryeh Koenig) are committed to the idea, and girls are allowed to do their national civil service with movements that were once considered aberrant, like the Temple Institute.

Speaker after speaker came onstage and described the impossible tangle Jerusalem has become 46 years after its “unification.” Their starting assumption was that without two capitals in Jerusalem there won’t be an agreement, and if such a thing were still possible, its time was running out. The forces working to derail the possibility of a Palestinian capital in the city are large and strong, and an equal force is not standing against them. I looked around the hall and saw the conference participants, veteran Israelis and young diplomats, slowly sinking into their seats. In the background, on the large screen of the Cinematheque hall, a slide was projected with the symbols of two bodies — the Palestinian-Israeli Peace NGO Forum that planned and organized the conference and the EU Partnership for Peace that funded the gathering. For a moment, I was impressed by the boldness of the European Union, which gave its name and money to a conference dedicated to challenging the position of their host government. Then I saw a line at the bottom of the program that said, “The speakers are to be held solely responsibility for their words, and in no way should they be considered to reflect the positions of the European Union.”

The Americans have a saying: “Put your money where your mouth is.” The diplomatic concern not to further strain the relations with the Israeli government can be easily understood. But if the representatives of governments that invest millions of euros a year to bring an end to the local conflict reached the same conclusions from the conference as I did, they should send urgent messages to decision makers in their countries: The situation in Jerusalem is acute and volatile. If the courage isn’t found to move from polite and restrained protests in a conference hall to actual and decisive actions — they’re wasting their money. And our blood.

To die for an idea, that’s a great idea

And the prophets of doom continue to preach

And one day as we march to a coming war

Upright and overflowing with pride

We’ll find out that we died for nothing

Because of a small glitch

To die for an idea — yes, it’s a real good commandment

But better to die slowly, slowly, of old age

Because what is an ideal today, tomorrow will turn out

To have been a mistake, and then another ideal will pop up

(From “To die for an idea” by Yossi Banai/Georges Brassens)