In the ever-volatile Iraqi capital, many citizens fail to feel reassured by the hundreds of security checkpoints that mostly slow down daily life around the city. 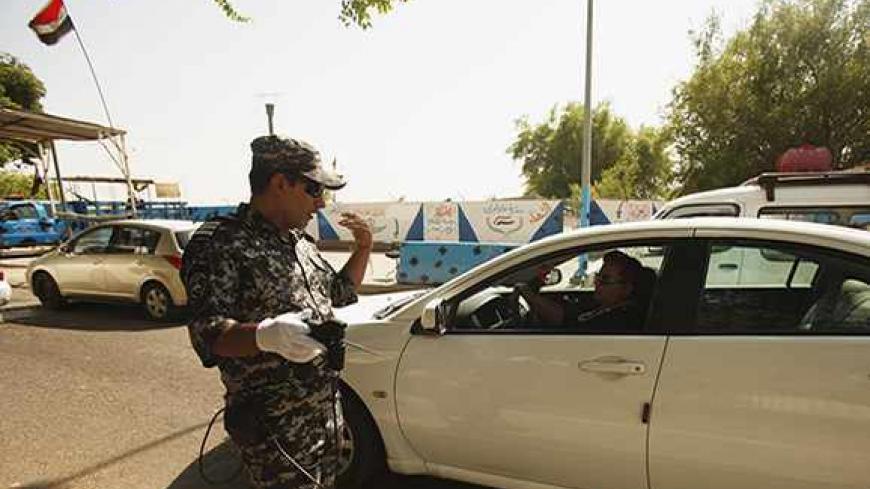 Most of the soldiers deployed in the dozens of checkpoints in Baghdad’s neighborhoods, crossroads, main roads and bystreets are not satisfied with their often unfruitful presence in the streets, or with the attitudes of the citizens who are displeased with the traffic jams caused by the checkpoints, where no actual checking takes place.

Security sources told Al-Monitor, “There are around 250 fixed checkpoints in Baghdad and a similar number of smaller or mobile ones. This number reaches around 1,000 checkpoints during major security crises or religious occasions.” Meanwhile, other provinces have fewer checkpoints, and the Iraqi Kurdistan Region has almost none.

A lieutenant at a checkpoint in Baghdad spoke to Al-Monitor on condition of anonymity, saying, “We know that we are facing a lot of criticism in the streets, and we are aware that many people see no point in our presence there, especially with the resulting delay and nuisance.”

The young officer, who makes no effort to hide the signs of fatigue on his face, added, “We are discussing the situation almost daily, and prominent leaders often visit us. We give them our remarks, especially regarding the bomb detectors, which we were laboriously trained to use for years. Later, we discovered that they were ineffective.”

Soldiers and officers reiterated the same comments and expressed their desire to protect citizens. They spoke about their daily sacrifices: “Attacks and assassinations that are blacked out by the media, some of which happen late at night, bombings and booby trapped cars — these are some of the things we have to deal with.” The soldiers also have stories about heroic acts by their colleagues, in which they attacked militants or killed them or deterred suicide attempts.

Moreover, the major security leaderships have their own comments and convictions regarding checkpoints. Gen. Mohamad al-Askari, speaking on behalf of the Iraqi army, said Sept. 4 that it is hard to withdraw the checkpoints from the streets without having a security substitute that makes up for their absence. Askari admits that the checkpoints cause traffic troubles. However, he asserts that Iraq is trying to find substitutes and benefit from technological surveillance devices like cameras, blimps and modern bomb detectors before reducing military presence in the neighborhoods.

However, the checkpoints are not always able to impede militants from reaching their targets. Ali Awad, a cab driver on the Diyala-Baghdad road, can provide more accurate details about the checkpoints, given the nature of his job. He explains, “The checkpoints are mostly located on main roads, but there are dozens of byroads running through neighborhoods. Bombers who want to infiltrate into Baghdad, individually or in booby-trapped cars, could take advantage.”

Awad, speaking to Al-Monitor, illustrates his point with an example on the map. “When a checkpoint blocks the Sha’ab neighborhood, which is considered one of Baghdad’s most important border points, as professional drivers on this road, we resort to substitutes. We cross the Al Rashidiya ranches and drive along the Tigris river to reach Baghdad’s touristic island, then Al Qanat street,” states Awad.

Awad confirms that this road does not include real checkpoints, but a small spot in a remote area where one police officer stands.

Checkpoints ought to be deployed almost everywhere, as there are thousands of side roads surrounding Baghdad, where people can easily infiltrate [into the city]. Meanwhile, some main neighborhoods in Baghdad such as the neighborhoods of Saidya, Al-Adhamiyah and Al-Khadraa have been surrounded by walls, in such a way as to have only one exit and one entrance.

According to Saad Abdul Aziz, a security expert, the checkpoints in the streets play a psychological role. “The military uniforms give citizens a sense of reassurance as to the presence of the state,” he told Al-Monitor. “Terrorists seize the opportunity when there are no checkpoints in certain areas to take control of them.”

However, Abdul Aziz said that the sense of security is not linked to extensive deployment of checkpoints. “Main checkpoints ought to be deployed in main neighborhoods or at the entrances and exits of main streets. Meanwhile, fixed police and army stations ought to be established on side streets in such a way that it would not obstruct traffic and hinder tracking down suspicious vehicles,” he said.

Thus, it is only normal for Ahlam al-Kassab, an employee at the Ministry of Oil, to be about two or three hours late, stuck in traffic at checkpoints before getting to her workplace, while her normal commute takes 15 minutes, as she told Al-Monitor.

“A lot of the checkpoints are cooperative. However, some of them can be hell, especially for women driving their own cars, as we are subjected to harassment. One of the officers used to stop my car daily for inspection just to woo me, and when I threatened to file a complaint against him, he stopped, but he really scares me,” she said.

Besides these harassments at an individual level, Zayd Adel, a student, told Al-Monitor: “These crowds that form near the checkpoints make me feel as if I am a human shield. Every time I say to myself, what if terrorists decide to take advantage of these masses to carry out a suicide bombing attack? The problem is that after a long queue at the checkpoints to be inspected, we are not actually searched [as we should be].”

The Iraqi strategy to preserve security in cities is constantly severely criticized, namely the weak intelligence system, which is supposed to deal more intensively with armed groups.

“Surveillance systems and cameras ought to be established in the streets of Baghdad, in addition to a special unit charged with monitoring the streets to be linked to checkpoints or mobile units,” said Abdul Aziz.

“The security authorities have practically no surveillance system. In case of attacks, they use the photos captured by the surveillance cameras of nearby shops, which do not provide clear or accurate depiction, especially at night,” he added.

Moreover, Abdul Aziz noted, “Iraq has spent huge amounts of the budget on security. It would have been useful to focus on modern technology in surveillance, such as satellites, and mobile and fixed surveillance cameras, which are accurate means to monitor the streets.”

While people continue to wait for the Iraqi security plans to change, the talk about the checkpoints will drag on. The debate about their ability to provide security and a sense of reassurance will rage on, as long as cars are queuing up every day.