The Israeli media has painted a recent confrontation in Hebron as the result of growing radical Islamism in the West Bank despite the lack of evidence for such a cause. 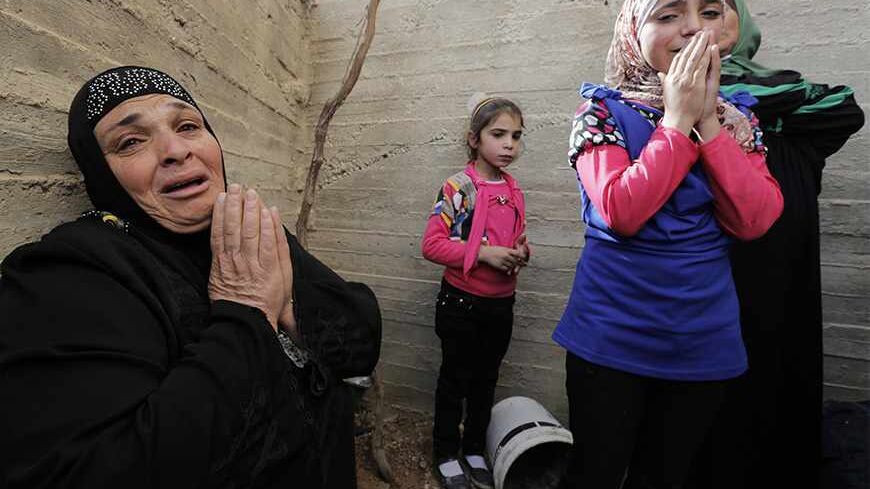 Women and girls mourn during the funerals of Mousa Makhamra and Mahmoud Khalid al-Najjar in the West Bank village of Yatta, near Hebron, Nov. 27, 2013. - REUTERS/Ammar Awad

As is often the case, the news concerning the circumstances of the Nov. 27 Israeli killings of three Palestinian men is being told from one side because the other side is unable to be respond or be heard.

The undisputed facts are that members of the Israeli army stopped a vehicle carrying three Palestinian male passengers. They killed two of the passengers at that time, and the third apparently ran away but was later killed as well.

The official Israeli version is that the army had been tracking the occupants of the car for a few days when they were spotted in an area under its control. The army claims that the Israelis shot out the tires and after a short exchange, two Palestinians — Mahmoud Khalid al-Najjar and Mousa Makhamra — were killed, and a third — Mohammad Nayroukh — was chased and killed. The Israelis, who say that they recovered pistols and bomb equipment in the possession of the Palestinians, have made unsubstantiated statements that the three were planning to carry out operations against Israeli and Palestinian government targets.

Nasser Laham, editor of Ma’an News, criticized the Palestinian government’s silence on the killings, arguing that the Palestinians have allowed the Israeli narrative to prevail in tact. Ma’an, in its Arabic edition, provided sketchy information about the incident, but asserted that Nayroukh had managed to get to a nearby clinic in Yatta, where he died from his wounds. No eyewitnesses have been quoted to back up the Israeli version of events.

The bodies of the dead men were turned over to the Palestinian liaison committee and laid to rest during a large funeral protest at which Hamas flags and banners were waved, raising doubts about Israeli claims that the three Palestinians had splintered from the relatively moderate Hamas in favor of a more radical version of Islamic extremism.

In his widely read column, Laham was especially critical of the Israeli media blitz that justified the killings based on the claim that the three Palestinians had belonged to an extremist jihadist movement with the intention of attacking Israel. The Israeli propaganda machine painted a picture of a “violent stream of puritanical Islam” growing rapidly in the West Bank and succeeding in part due to the public opposition to both the Palestine Liberation Organization and Hamas.

Israeli claims that radical Islamism is spreading in the West Bank does not hold up against an opinion poll published Nov. 27 that shows Palestinian Authority President Mahmoud Abbas to be the most trusted leader among Palestinians, with a satisfaction rate of 53.7%. The poll also showed that Fatah's popularity had declined, from 36.8% a year ago to 32% today, while Hamas’ popularity has held steady at 16.0%. Nonviolent forms of struggle continue to gain traction among Palestinians, with slightly more than 60% supporting either negotiations or peaceful resistance.

While the above statistics indicate that Palestinians remain generally moderate in their views, the one exception to the rule is the Hebron area, which has been a center of extremism. Radical Jewish settlers lasered in on Hebron shortly after the first settlement activity at Gush Etzion in April 1968. While the Gush Etzion settlers were largely secular Zionists, those in Hebron have been and continue to be extremist religious ideologues.

In the winter of 1994, Baruch Goldstein, a Jewish settler dressed in army fatigues, entered the historic Ibrahimi Mosque at dawn and gunned down 29 Palestinian worshippers. Goldstein's actions triggered the first Palestinian suicide attack. The process of Jewish radicalization is seen by some as the main instigator of similar extremism on the Palestinian side.

Hebron, home to 160,000 Palestinians, is the only city in the West Bank that radical Jewish settlers live in the middle of. Guarded by Israeli army troops and causing havoc for their neighbors, the Jewish settlements in the center of Hebron have severely disrupted the business and commerce of the city. More important, however, they have produced a major backlash against them.

The killing of the three Palestinians refocuses attention on the old argument that radicalism begets radicalism. To deal with this spiraling problem, a way needs to be found to remove the source of conflict and crisis in Palestine, not simply to manage it. The Israeli occupation, constantly feeding discontent, anger and extremism, cannot be resolved by further violent repression, which only adds fuel to the fire.