Hamas has appointed its first female English-language spokesperson partly to end the stereotype of the organization as an oppressor of women. 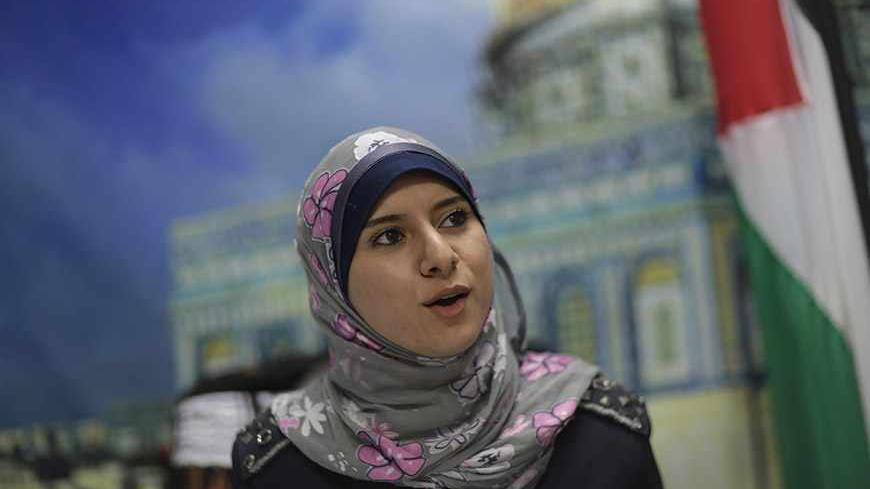 GAZA CITY, Gaza Strip — The Hamas-run government has appointed a young woman as the first English-speaking spokesperson designated for the Western media. The move was seen as a bid by the Islamist government to correct one of the stereotypes associated with the way it deals with women and an attempt to present more influential and convincing speech to the world media.

Israa al-Mudallal, 23, now occupies a small room at the government’s media department in Gaza City, next door to Ihab al-Ghussein, the government’s spokesman and head of the department. Dressed in a beige headscarf, Mudallal highlighted the message she wanted to relay to the outside world.

“I want to change the formula of the Palestinian discourse to the international community,” she told Al-Monitor. “I will focus on the humanitarian dimension, like the electricity problem and avoid the disgraceful matters, such as the Palestinian division.”

Mudallal is aware, however, that she will be speaking for an isolated government far away from the Fatah-led one in the West Bank. But she insists it won’t be a problem as long as she speaks on behalf of Palestine rather than any one faction.

The appointment is in line with Ghussein’s strategy to enhance the Hamas government’s image in the international media. He pointed to this as one of his main goals when he assumed the role of head of the media office over a year ago. Assigning an English-speaking spokeswoman was a significant step that took a year to achieve.

“I consulted a lot with different officials from the government and the idea was greatly welcomed by everyone,” Ghussein explained to Al-Monitor.

The selection of a female as spokesperson was intentional, Ghussein added, as an attempt to break the stereotypical perception of Hamas around the world as an oppressor of women.

“We always asserted that we are not against woman participating in all aspects of life, yet actions speak louder than words, of course,” he noted. “I have chosen Israa from dozens of names because I was sure she was the right person in the right place.”

Young Mudallal lived in Bradford, United Kingdom where she attended secondary school for two years. She returned to Gaza and graduated from one of its public high schools before studying journalism at the Islamic University. She quit her job at the university’s Al-Kitab satellite channel, where she had presented a talk-show program about Jerusalem, to assume the role with the government.

As Hamas is classified as a terrorist organization by a number of Western nations, Mudallal is aware that joining the government will restrict her movement around the world and is ready to make the sacrifice.

“I don’t want to fear things that haven’t happened yet, but if this happens I’ll consider it one of the sacrifices I dedicated to my country,” Mudallal said.

It took Mudallal almost eight months to decide to accept the government post and leave her audience behind, which she said was one of the hardest parts of the decision.

“As a TV presenter, I chose every single word I uttered. This is not the case anymore. I’m representing a government now,” she explained.

Israeli newspaper The Jerusalem Post reported that the Israeli Army Radio tried calling Mudallal, which was met with an apology from her.

“No media here will speak with Israeli press; it is unacceptable and I apologize to you,” the newspaper quoted Mudallal as saying.

The feedback to the appointment has been satisfactory, Ghussein said, adding, “The step wasn’t attacked by anyone, at least from the officials. I hope the step will achieve its desired long-term effects of portraying Palestine the way it should be portrayed.”

Mudallal has some experience with international audiences, as she has worked with pro-Palestinian international activists, but she conceded that dealing with foreign journalists would be a whole new experience. She said, “I’m aware it’s a huge responsibility, but I hope I’ll be up to the challenge as time progresses.”

Mudallal has previously worked as a correspondent for Iran’s English-language channel Press TV in addition to the local Al-Kitab channel. She said she doesn’t fear being categorized as a certain type of journalist due to her employment.

“All the places I have worked in taught me something new, but I will work to support my Palestinian cause wherever I go.”