Gazans have few options for evening entertainment between tight restrictions from the Hamas government and the economic crisis caused by the blockade. 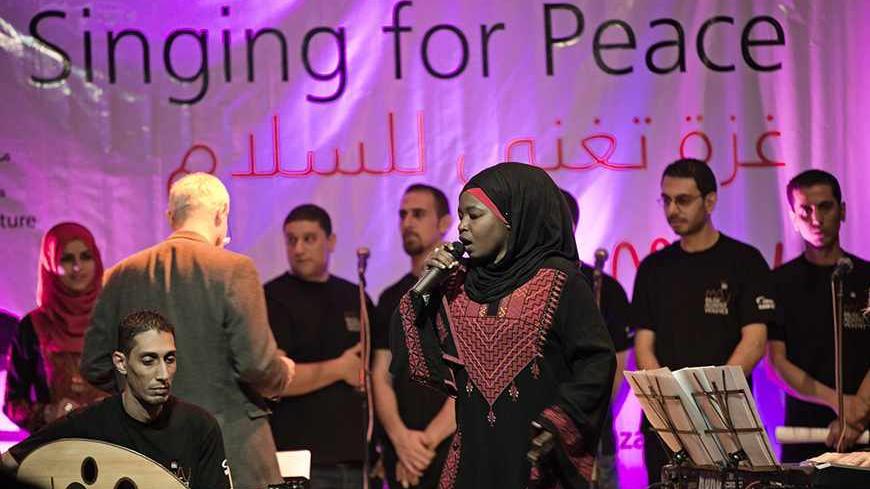 GAZA CITY , Gaza Strip — In a very irregular night in the conservative enclave, hundreds of people of both genders gathered at the fancy Al-Mathaf hotel’s main hall, overlooking the beach, to attend a jazz concert performed by local and Swedish artists.

People of different ages seemed excited to attend such a concert not only because they were interested in music, but also because such concerts are barely possible in Gaza.

Razan Hassouna, 20, was delighted to finally get the chance to experience the nightlife she had always dreamed of, even if it was for one night only.

“It feels like Ramallah, I’m so happy. We people in Gaza need such refreshment because of the hard life we live here,” Hassouna told Al-Monitor while snapping shots of the performing artists.

Due to its location beside the Mediterranean, Gaza is not short of restaurants and hotels where people can engage in leisure activities, but that doesn’t make nightlife here special. A certain class can afford to patronize these venues, but only to chat or have dinner since they aren’t allowed to do anything more.

Night parties were never common in Gaza, and nightlife became even more stifled after the Islamic Hamas movement took over the Gaza Strip in 2007. Venue owners avoided any confrontation with the Islamist government.

Samir Skaik, manager of Al-Deera hotel and restaurant, one of the most popular places in Gaza, said he became more cautious after 2007 brought restrictions that are not clearly regulated by the law.

“I can’t risk holding night parties, because I don’t know what I should avoid, which means that the event might be banned on the spot, causing me a huge embarrassment,” Skaik told Al-Monitor.

Yet Skaik asserted that nightlife had always been restricted, even before 2007, by the traditions of society. He explained, “Either with governmental restrictions or without them, people in Gaza were always conservative, and they are still.”

After Hamas took over, alcohol was no longer served at Gaza restaurants, though it was never a major phenomenon here anyway. Inconsistent regulations also often banned women from smoking hookah and the genders from mixing in public places. Many events were denied permits or even banned minutes before they were supposed to start, serving as a deterrent to those thinking of holding parties.

At the jazz concert, Hassouna expressed surprise that the concert got a permit in the first place. She said, “I keep looking at the door of the hall. I feel as if the internal security men will come and stop the concert in any moment.”

At the only five-star hotel in the enclave, ArcMed hotel, parties often take place on Thursdays, but coordinators must obtain a permit before holding them. Ibrahim Hijazi, one of the coordinators, said that he must always receive a written permit from the government, which obliges the hotel to “commit to the general morals of society.”

“The ‘general morals’ are not defined in the permit, but we already know them and are committed to them, such as banning people from dancing in public,” Hijazi told Al-Monitor in a phone interview. He also revealed that security services monitor his parties, noting, “We might have security in disguise, but we are committed [to the permit] anyway. We are not concerned about such observation.”

Foreigners from nongovernmental organizations — whose numbers are small — are the only people are allowed to bring in alcohol for their events.

The economic crisis in Gaza caused by the Israeli and Egyptian blockade has also reduced the number of patrons at such venues. After the Egyptian military’s July ouster of Islamist President Mohammed Morsi, the military clamped down fiercely on the smuggling tunnels beneath Gaza’s southern border with Egypt, depriving Hamas of its lifeline.

As a result, fuel ran low, electricity and construction materials became scarce and work in the building sector has idled, resulting in tens of thousands of workers being laid off.

Skaik noted that his hotel is facing the same hardships as the people.

“We also have the problem of blackouts and lack of fuel, in addition to the huge decrease in customers.”