The approval of an amendment by a constitutional committee allowing military trials for civilians is considered a setback by democracy activists. 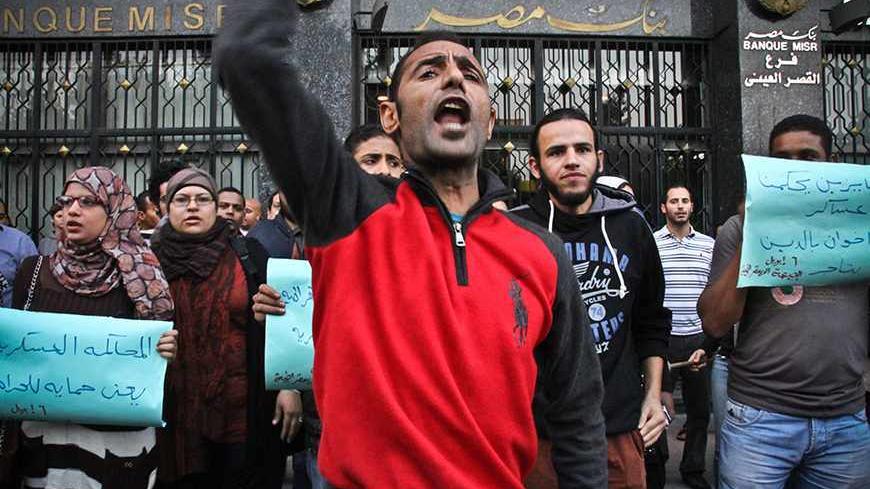 Members of the No Military Trials for Civilians campaign protested outside Egypt's Shura Council in Cairo against an amendment to the draft constitution that would allow military trials for civilians, Nov. 9, 2013. - Shadi Rahimi
Shadi Rahimi
@shadirahimi
November 22, 2013

CAIRO — Sinai novelist and activist Mosaad Abu Fajr was jailed for nearly three years under the rule of former president Hosni Mubarak for his campaign “Wedna Ne`ish” (We Want To Live), which protested issues faced in the Sinai and among the Bedouin community. Today, he is one of 50 people on a committee amending the 2012 constitution, drafted by the Muslim Brotherhood and Islamists.

This week, Fajr stormed out of a committee session when it appeared clear that a majority was voting in favor of an amended article that allows civilians to be tried in military court — a controversial amendment to Article 174 added since the July 3 military-backed ouster of former president Mohammed Morsi.

“There is a power that thinks that they can rule the country with AKs and military rule, which is impossible to achieve in reality and is not right and will not succeed,” he said. “In reality, we need people who believe in democracy, not force. That’s why this article is scary.”

Egypt's military appears to be retaining judicial and political powers in the new draft of the constitution, confirming fears that its takeover in July will not fully give way to civilian rule. After a heated debate in a sub-committee about military trials for civilians, text representing decades of military dictatorship remains.

Fajr is not entirely alone in his opposition: 30 voted for the amendment, seven voted against it and he and another member abstained, he said. Not all members were in attendance. Outside the committee, which was created to represent Egypt as a whole, activists from the No to Military Trials for Civilians group are calling for the removal of any text allowing civilians to be tried in military courts.

In the 2012 version, Article 174 read: “The State Council is an independent judicial body that exclusively undertakes adjudicating in administrative disputes and disputes pertaining to the implementation of its decisions.”

Now, Article 174 has been modified to refer to the “military judiciary” as an independent judicial body that adjudicates exclusively all crimes related to the armed forces, its officers and personnel.

The proposed amendments to the 2012 constitution have been determined by a 10-person committee made up of members of the judiciary and judicial experts, according to a constitutional declaration enacted after Morsi’s ouster.

Previously, the article stated that the State Council "undertakes disciplinary proceedings and appeals, adjudicates legal issues to be determined by law, reviews and drafts legislative bills and resolutions, and reviews state-related contracts."

Now, Article 174 states that members of the military judiciary are autonomous and cannot be dismissed, and that they share the immunities, securities, rights and duties stipulated for members of other judiciaries.

At a protest on Nov. 9 across the street from the Shura Council, Egypt’s upper house of parliament, about 50 people held signs and chanted against the amended article.

"We don't what military rule; we don't want the Muslim Brotherhood who uses religion to rule,” they chanted. “The military trial is a betrayal of the Egyptian revolution."

In attendance was activist Alaa Abdel Fatah, whose sister Mona founded the No to Military Trials for Civilians group. His father, Ahmed Seif El-Islam Hamad, is a human rights attorney who was tortured and imprisoned for five years during Mubarak’s rule in the 1980s, and later founded the Hisham Mubarak Law Center.

In May of 2006, also during Mubarak’s rule, Fatah was arrested during a protest calling for an independent judiciary. He spent 45 days in jail. On Oct. 30, 2011, under the transitional rule of a military government, Fatah was arrested on charges of inciting violence against the military during the Oct. 9 Maspero protests, during which around 27 mostly Coptic Christians died after being shot or run over by army vehicles in the worst violence since the spring.

Fatah was accused of having incited fighting in Maspero, of assaulting soldiers and damaging military property. Bowing to international pressure, military authorities allowed his case to be handled by a civilian court instead of military tribunal. Some of the charges were dropped and he was eventually released.

Fatah said the 50-member committee is bowing to military pressure.

"Military trials for civilians is a decision of the military institution, and the military can give orders to the 50 members of the committee," Fatah said.

A subcommittee that was set up to resolve the debate around the article included representatives of the army. Activists criticized the army's inclusion, saying the committee should have also included victims of military trials.

More than 12,000 civilians have faced military trials since the Jan. 25 Revolution, said activist Gigi Ibrahim, "but what is different now is that it is being drafted within the constitution, so it is becoming even more institutionalized."

The No to Military Trials for Civilians group has published testimonies on its website, from people it says are victims of torture at the hands of intelligence officers and soldiers. The testimonies include accounts of whippings, beatings, electric shock, and even death while in detention awaiting military trial.

The 50-member committee only suggests amendments to the new draft constitution, which is scheduled for completion by December and then would be put to referendum. Parliamentary and presidential elections are expected to follow.

"I believe that there is still hope,” said Fajr, regarding Article 174, which he said could still be amended to “at least reduce or lessen some of its horrible points.” Not all who voted in favor agree on every element of the article, he said.

Those who voted in favor included representatives of the church and Islamic institutions, Fajr said, along with representatives for journalists, lawyers, engineers and political parties including the Arab nationalist Al Karama (Dignity) Party, the nationalist liberal Al-Wafd Party, the National Progressive Unionist Party (Al-Tagammu), and the ultra-conservative Salafist Nour Party.

In the next few weeks, Fajr said he hopes to persuade at least 13 members to register their opposition, so that the committee will be forced to modify some of the wording before submitting the draft.

“The army needs to go back to their original job, which is protecting the country from outsiders,” he said.