Public support for Egypt's new government could take a drastic turn if it fails to solve the country's persisting gas shortage. 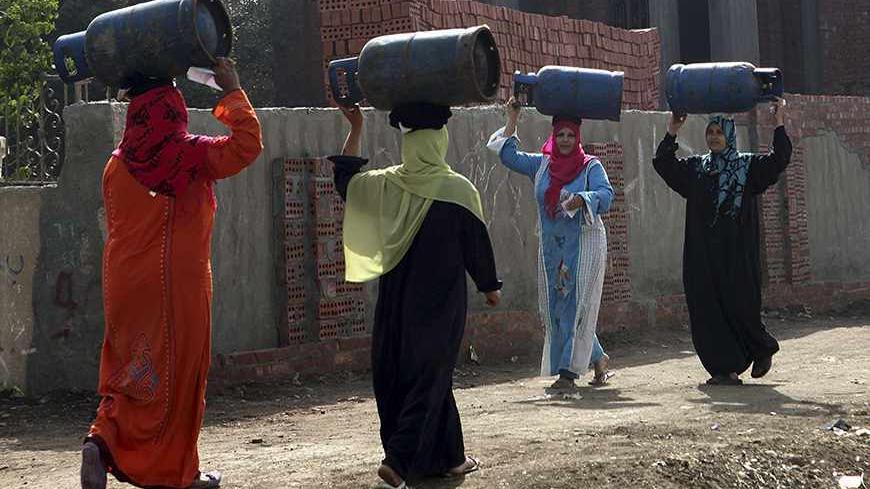 Women carry gas cylinders to be refilled on the outskirts of Cairo, April 1, 2013. - REUTERS/Asmaa Waguih

GIZA, Egypt — Husniyah Abdelfatah stood in a long line of more than 300 people — most of whom were women — that stretched along the narrow alleyways and streets of the Kardasa neighborhood in the Giza governorate. This woman in her 30s carried an empty gas tank and waited for more than five hours to get it filled from the natural gas dispensing warehouse, but to no avail.

As noon approached, Abdelfatah told Al-Monitor that she had been waiting in front of the warehouse since 4 a.m., in a line that did not end or move. No one managed to secure the sought-after refills. “All that we ask for is butane for cooking food and a fresh loaf of bread to eat. But there is no system in place to distribute gas tanks,” she said.

Boredom is accompanied by spates of violence, which is spreading through many Egyptian neighborhoods and governorates, leading to numerous casualties, as a result of the worsening shortage of butane gas upon which the majority of Egyptians rely as their primary source of cooking fuel at home.

The government tried to contain the butane shortage crisis by holding a number of meetings with experts from the Ministry of Petroleum and Ministry of Supply who were tasked with developing a scheme capable of remedying the problem through the implementation of a smart card system and the distribution of tanks to those citizens holding ration cards. The meetings also put in place administrative and criminal penalties meant to deter the trafficking of gas tanks on the black market.

An Egyptian government communique — of which Al-Monitor obtained a copy — stated that deterrent administrative and criminal penalties would be imposed on the traffickers of tanks on the black market. The administrative penalties include the implementation of ministerial decisions Numbers 102, 103 and 504, which call for the confiscation of all tanks seized on the black market and reimbursement of any price differences. It also stated that coordination was currently under way between the two ministries as well as the investigative division of the Ministry of Supply to contain the crisis.

Minister of Supply and Internal Trade Mohamed Abu Shady told Al-Monitor that the government was committed to making butane gas tanks available, thus quickly ending the crisis. He also shared that the cabinet had decided to supply Egyptian markets with an additional 1.1 million tanks.

“The government has not canceled nor will it cancel current subsidies on energy sources such as butane or gasoline. It has also decided to convert payments in kind to cash, thereby raising total government subsidies for bread and essential commodities to 35 billion Egyptian pounds (about $5.1 billion) in the current year’s budget,” Abu Shady continued. He also pointed out, “My ministry was having to contend with a lot of rumors spread by suppliers of essential goods looking for profit as well as rumors propagated by political interests aimed at belittling the government’s abilities.”

Furthermore, a source at the Ministry of Petroleum said that the government had received a grant from Saudi Arabia as part of its aid program to Egypt, in the form of an additional shipment of butane gas — totaling 80,000 tons — to be delivered to Egypt Nov. 20-25.

The source expected the grant to alleviate the shortage in local markets but also warned that the atmospheric turbulence expected to hit the region soon could hamper delivery efforts. He also affirmed that the government had issued instructions to increase the supply of butane in the main warehouses.

In addition, Prime Minister Hazem el-Biblawi held an urgent meeting with the Board of Governors on Nov. 7 to discuss ways by which to solve the gas crisis, tighten supervision over gas transport vehicles, reduce smuggling and eliminate the black market trade. The meeting sought to accomplish all this while improving the butane distribution system through a delivery service that guarantees better control over the distribution process.

Citizens, however, complained of the widening scope of black market operations revolving around the distribution of butane tanks. “We are facing great difficulties in obtaining gas tanks from the main supply warehouses. As a result, we are forced to raise our prices as demand increases,” Mohammad Abbas, a butane tank distributor in the El-Warraq neighborhood of Cairo, told Al-Monitor.

“I received one gas tank after two days of waiting, at a cost of 60 Egyptian pounds ($8.71), while on normal days, the price does not exceed 10 pounds,” said Hassan al-Bahi, a government employee. He rejected the government’s proposal to distribute butane through the ration card system. “Egyptian households consume at least three tanks per month to operate their stoves, heaters and ovens, especially in wintertime. The coupon system would allow me to receive only one tank. How can I obtain the rest?” Bahi queried.

The Egyptian government offers in-kind subsidies to certain socioeconomic groups for essential goods that they receive through ration cards, with subsidies totaling 22.3% of the total general budget. Petroleum, diesel and natural gas products receive the largest amount of backing, equaling 72% of total subsidies, with butane garnering 14% of subsidy allocations. This is at a time when Egyptian households currently consume approximately 36 million tanks of butane per month, according to statistics from the Information and Decision Support Center.

The gas crisis is the first crisis that the Egyptian government — under Biblawi's leadership — has had to face on the streets, 100 days after coming to power following the June 30 demonstrations that ousted former President Mohammed Morsi. The previous cabinet headed by Hisham Qandil failed to address the electricity and fuel crises as well as the shortages in gasoline, diesel and butane.

Some political activists have launched satirical campaigns against the government as a result of the gas crisis, circulating photos on social networking sites adapted from glyphs found on ancient temples. In the images, they show pharaohs holding butane tanks with the caption,“Egypt, temple of Deus No-tank.”

Maged Othman, president of the Egyptian Center for Public Opinion Research — one of the largest such centers in Egypt — told Al-Monitor that the butane gas crisis might affect the government’s image in the eyes of public opinion and weaken its popularity, as was the case with the previous government.

Othman affirmed, however, “Some decisions taken by Biblawi’s government such as raising the minimum wage to 1,200 Egyptian pounds ($174.23) a month for public sector employee, imposing an export duty on fertilizers payable to farmers and exempting public school students from school fees were all good decisions by the government. The public’s patience with the government, however, has continually been short, and people always expect that decisions will be made in their favor. Egypt today is witnessing an internal phenomenon whereby failure is sought out so that the government and regime can continue to be blamed.”