Racist taunts toward Gaza’s African minority are not uncommon, despite centurieslong African migration to Palestine. 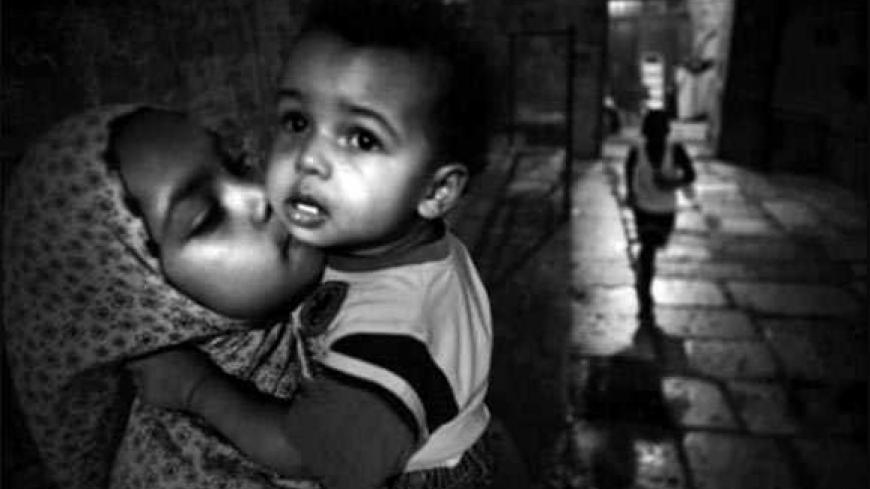 Dark-skinned Palestinian children stand outside one of the entrances of Temple Mount, Sept. 10, 2008. - Rachael Strecher/joshberer.wordpress.com

GAZA CITY, Gaza Strip — “Hey, chocolate,” “Hey, cappuccino,” “Hey, Galaxy [brand of chocolate],” “Hey, brown one” and “Hey, black one,” are jocular expressions used by some in Gaza when a man, woman or child of African descent passes by. Sometimes the racism is expressed nonverbally through looks. Gazans, however, seem unaware of this racism.

Al-Monitor met with political activist Samah al-Rawagh, 33, at her home and asked her whether she experienced any discrimination due to her skin color. She made light of the matter. Yet, when her father Ahmad al-Rawagh, 80, recounted incidents he had experienced involving racism, Samah was shocked. “That’s the first time I’ve heard such stories from you,” she said.

“I struggled a lot to overcome the difficulties caused by the color of my skin. I always had to doubly prove myself at school, at work and in life, because I’m dark-skinned,” Ahmad said.

He said that they are originally from Sudan. His ancestors came at the beginning of the 20th century and lived in Palestine — in a village called Roubin, neighboring Jaffa — until 1948, when they were forced to migrate to the Gaza Strip. "But I never felt that I did not belong here. Palestine is the homeland I have always known, and is a homeland to about 10,000 other dark-skinned people in the Gaza Strip."

Ahmad remembers when he was a teacher in the late 1950s, and one of his colleagues invited everyone, except him, to a wedding. “That day, I felt embarrassed, and I decided that no one in my family would go through such an experience,” he said.

Ahmad, who managed to complete his education, also participated in handball competitions abroad in the 1960s. “I didn’t want the color of my skin to be an obstacle for me or my children. I put them through private schools, so that they didn't hear anything that would offend them.”

Samah agreed with her father and added, “I never felt that the color of my skin made me different from others. I always had the best toys and clothing. I studied in a private school, and I felt that people liked me. Sometimes, I heard comments that bothered me, but this is the first time I’ve heard about my father’s suffering.”

Samah did not deny that she has been hearing more discriminatory words recently, but she denied that it is about hate. “I hear phrases such as ‘Hey, Galaxy.’ But I sometimes feel that it’s banter, rarely for the purpose of harassing me,” she said.

There are no clear historical sources that speak about the African minority in Gaza, but there is an oral history passed down by families from one generation to the next. Journalist Ali Bakhit, 28, said that he learned from his great-uncle that his family originally comes from Ghana.

"Africans first entered Palestine during the Islamic conquests, specifically when Caliph Omar ibn al-Khattab entered Jerusalem, accompanied by a number of Africans. African communities from Chad, Nigeria, Sudan and Senegal came in the late 19th century, either for worship or to participate in the resistance," Bakhit noted in an interview with Al-Monitor.

According to Gaza Through History, a book by Ibrahim Sakik, wealthy families in the Gaza Strip participated in the slave trade hundreds of years ago. Another book, Delighting in the Wealth of Gaza's History, notes that some of the residents of the Palestinian village of Berbera were dark-skinned people who came from Morocco.

Al-Monitor asked multiple historians about the African minority, yet most of them noted that there were no books dealing with their history. "The majority of families with dark skin in Gaza originate from Sudan and Egypt, many of them came to work in the Ottoman Empire's army hundreds of years ago," noted Palestinian historian Salim Moubayed, speaking to Al-Monitor by phone.

Next to the Rawagh family’s home there is an entire area on Jala Street inhabited by dark-skinned Gazans. The people and taxi drivers refer to it as the “black neighborhood” or the “dark-skinned neighborhood."

Mohammed Abu Rashed, 13, who is a talented soccer player and dreams of becoming like Lionel Messi, recounted his experience to Al-Monitor. “At school, they say ‘Hey, chocolate,’ but I don’t pay attention to them.” His friend Ahed, 17, interrupted and said, “Liar. We do get bothered.” Ahed pointed to a white boy with colored eyes riding a bicycle around them and said, “That boy, for example, always says to us ‘Hey, brownie. Hey, chocolate.’” The white boy smiled and responded, “Because I like you.”

Abed al-Rawagh, 21, who works at a grocery store at the neighborhood’s entrance, told Al-Monitor that racism affects his business. “I don’t feel discriminated against until a white girl or woman comes to buy from the grocery store. As soon as she sees me, she changes her mind about buying and leaves. There’s a widespread belief that a black man would harm her. That offends me.”

Bakhit, who lives in the Nuseirat camp in central Gaza, recalled an incident with one of the security services in Gaza after the split in 2007. “The policeman looked inside a taxi and ordered the two dark-skinned men inside, us, to step out. So my brother and I stepped out, and we headed to the search location. After they made sure that we weren’t suspects, we went back to the car. I felt very insulted. The driver asked me why. I told him ‘It seems we are now in Chicago!'”

Yet despite this, Bakhit maintained that he is happy in Gaza and that he feels that he belongs here. "I'm not worried about my son's future growing up in this society," he said.